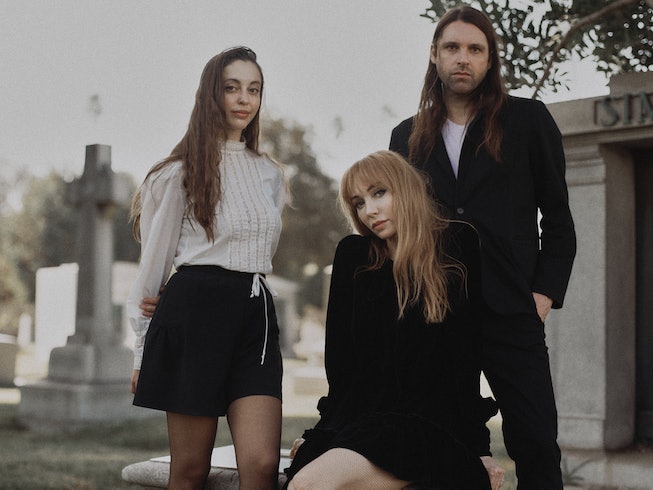 Nearly four years after releasing their stunning debut album, The Dream, Tashaki Miyaki — the beloved Los Angeles dream-pop trio who made a splash with their hazed-out '70s sound back in 2011 — is back to deliver another potent spell of tunes. Their sophomore record Castaway arrives on April 23, and on Wednesday, the band is exclusively premiering its title track on NYLON.

Awash with melting synths and melodic, rolling guitar, "Castaway" nearly begs you to perch right by your window so you can gaze longingly into the trees while thinking about love, of course; consider it paying tribute to the most beautiful and tragic figures of our time, like Kirsten Dunst and co. from The Virgin Suicides. In its equally lush and melancholy visual, the camera follows a young woman as she does just that — alongside meandering around her home and the tree-lined streets — before ending up at a beach to gaze into a pastel sunset.

Shot on film by lead singer Paige Stark, the visual actually did take some lighting and aesthetic cues from Sofia Coppola's moody masterpiece, and was meant to feel "romantic and personal."

She adds of the song: "'Castaway' is about the challenges of romantic love and how we are all bad at it in one way or another. [...] The idea of a castaway in all this is that no one understands the relationship except the people in it, so you really are stuck on an island alone together there, and maybe you make it back to the mainland, and maybe you stay on the island.

"For the video I wanted to tap into all the feelings that can come up in love relationships: anger, sadness, loneliness, vulnerability, stillness, joy, romance, longing. Cami, my actress, has a beautifully expressive face and I've known her for a long time. I knew we would be able to create those moments together [...] I wanted it to feel like the camera was her lover, capturing her in various private moments, moods and feelings."

Watch it below, and read on as the band discusses the wait between albums, and the other films they've been enjoying recently.

What are you all up to right now — describe your surroundings.

Stark: I'm in LA in an apartment with a few instruments, two small dogs, and some plants. I have created small piles everywhere... piles of books I'm halfway through, notebooks, piles of clothes. But my plants are thriving, so that's good. And my piles are organized. Most days I do yoga and attempt some type of creative thing. Occasionally I binge Netflix and eat ice cream for dinner.

Luke Paquin: I'm in a house in Echo Park with a dog and a cat and some relatively high-speed internet. Life is ok.

Sandi Denton: I’m a student, so I’ve been spending a lot of time at home in Zoom classes. When I’m not studying or in class, I might do a ballet barre class from home or play my instrument. I also try to escape to the beach as often as possible. Sometimes I just drive out to catch the sunset and then circle back home.

It took almost seven years for your debut album to come together — has making music become a faster process for you guys now?

Stark: It wasn't quite that much time. When we officially became a band it was 2012, and we did most of the recording between 2012 and 2013. We were doing a lot of back and forth between LA and the UK and doing festivals and things. So we would record when we could. I was also learning how to record and how to be a producer and how I wanted mixes to sound. I made some records with other artists and would learn things and want to redo stuff on the Tashaki recordings. Then our original bassist left the band and I wasn't sure we would continue as Tashaki Miyaki, but ultimately we decided to keep going.

We met Sandi in 2014. And then we were a band again, and I thought, “Let’s finish the record.” It took time to save money and book spaces to do each thing like record the strings, do overdubs, mix, master, etc. We were also touring and would have to save up to leave for each tour since we were only breaking even. A lot of people don't talk about this. Everyone wants to seem all baller.

I recently saw an interview with Phoebe Bridgers talking about the privilege she had making her first record. Her producer did it for free upfront assuming they would get paid later. She had gotten lucky with some commercial money and was able to support herself and focus solely on her record, but it still took a year. I was glad to see someone talking about those specific challenges. When you don’t have a label supporting you, and sometimes even if you do, you might need to have another job to pay your rent and you don’t have as much free time. To do something right, it takes dedicated time — especially on a first record when you are figuring out your sound and exploring. And it probably is ideal to not have to do anything else.

I have privilege in many areas, but I never had the time to solely focus on my music until the pandemic, which has been odd as there's this underlying doom element. If we had not had to do anything else during the first record, or had any kind of guidance, I think it would've taken much less time. In 2020 we completed two records. We finished Castaway and we made an instrumental record... So I guess it is going a bit faster now.

Where are all of your heads at now, going into Tashaki Miyaki's sophomore album?

Stark: I hope the record connects with people and I'm glad it's going out into the world. I've also had a lot of fun making the videos.

Paquin: Really happy with the new album. A friend of mine up in San Francisco tells me he put his copy on the shelf and it completely melted the rest of his record collection.

Denton: I think we’re all pretty excited to get this record out into the ether as we’ve spent a considerable amount of time in quarantine writing and recording a new batch of songs. We’ve been really exploratory while pushing ourselves musically — a fitting reaction during this bizarre time we’re in globally.

In the past you guys have cited films are the main inspiration for the band's sound. What are some movies that have moved or influenced you all recently?

Stark: My favorite movie I've seen recently is An Unmarried Woman. I have also been watching a lot of pre-code films. I had never done that deep dive before. I went on a Barbara Stanwyck journey and ended up there. A lot of the pre-codes films are kind of bad ... they are certainly not all like It Happened One Night, but it’s been educational nonetheless.

Paquin: Lately I've been more into film discussion and criticism than the films themselves. There are all these old episodes of stuff like [At the Movies] that are so great. I recently was turned on this one Charlie Rose interview with Don Simpson and Jerry Bruckheimer where they are discussing Tony Scott's Crimson Tide. It is deeply disturbing as well as fascinating.

Denton: I’ve been engaging in a lot of escapist viewing lately. My favorite films tend to be worlds that I want to live inside. Some films I haven’t been able to detach myself from lately are Urban Cowboy, Badlands and Tarkovsky’s The Sacrifice. I think it’s the space these films evoke that I’ve been craving while I’m stuck inside my house and my head this past year.