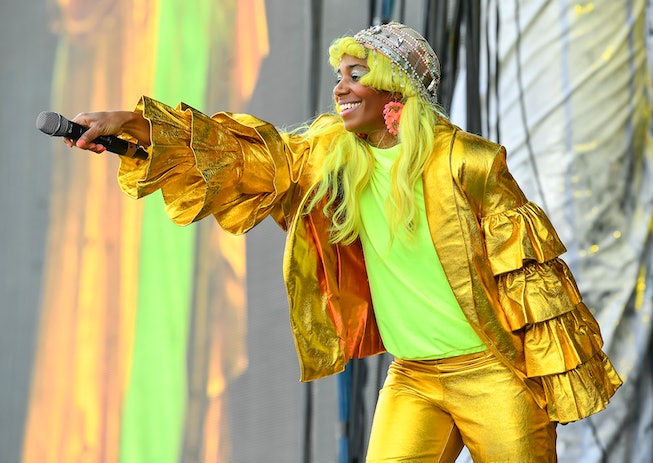 After a hiatus, Santigold is back with new music and a North American tour. The contemporary artist — best known for hit songs like “Creator” and “Disparate Youth” — has been working on her next big project and is (almost) ready to share new music.

Her fourth album, Spirituals, will be released this fall, through her label, Little Jerk Records. It was recorded during the 2020 lockdown, and, according to a press release, “captures the feeling of surviving in the modern world while elevating yourself to new places.”

Santigold is reportedly approaching this project from a holistic standpoint. Spirituals is not just new music, it’s a “multisensory experience” that will include video vignettes, a natural skincare line, and even teas. Santigold is also preparing a new podcast where she will interview other artists about the same themes explored in Spirituals. And if that’s not enough to pique your interest, she plans to explore literary, film, and product lines as well. In reference to her next creative era, she said, “I want to continue branching out in all forms of art, and I’m really excited to let my music take me to new places.”

Keep reading for everything you need to know about Spirituals and The Holified Tour — from the release date to Santigold’s tour schedule, and instructions on how to buy tickets.

When will Spirituals be released?

Spirituals is expected to drop on September 9th. In the meantime, she’s released two songs that give a little taste of what’s to come. “High Priestess” and “Ain’t Ready” are both available to stream.

According to a press release, “High Priestess” utilizes “the sound of her influences to create a futuristic version of punk, while “Ain’t Ready” is “a battle cry of resilience, perseverance, and stepping into your power.”

What are the Holified Tour dates?

The Holified Tour kicks off this fall and will hit a variety of venues across North America. According to a press release for the event, this concert gives fans “an opportunity to experience the world of Spirituals in person.” If you want to see Santigold’s creation live, check out the following tour dates.

How do I get tickets to the Holified Tour?

Tickets go on sale on Friday, June 24th, at 10 am local. Fans can secure seats to the show of their choosing on Santigold’s website. There’s currently a reminders feature that you can sign-up for if you don’t want to miss it!