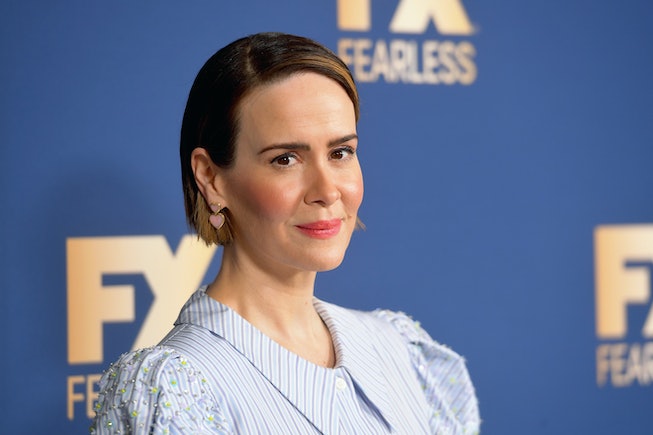 In 1976, Louise Fletcher won the Academy Award and the Golden Globe for her chillingly effective portrayal of Nurse Ratched, the fictional character who famously called for the lobotomization of Jack Nicholson's R.P. Murphy in Milos Forman's 1975 film adaptation of One Flew Over the Cuckoo's Nest. In 2021, we can safely assume that Sarah Paulson will be gunning for an Emmy for playing that same twisted nurse, as she breathes new life into the character for Ratched. After first being announced almost three years ago, the Ryan Murphy-produced origin story for one of literature's most reviled villains has finally received a release date (September 18th) and a batch of first-look photos.

Described by Ryan Murphy as "an imagining of how this monster was created,” the eight-episode Ratched is based on a spec script written by co-creator Evan Romansky that imagines the origin story of this fascinating antagonist — going back about 15 years before the nurse ever came across the patient brought to brilliant (Oscar-winning) life by Nicholson, back to 1947, when she was first seeking employment as a nurse at a psychiatric hospital in Northern California.

In an exclusive interview with Vanity Fair, Murphy said, “I feel like Nurse Ratched is sort of a shorthand for barbarism. She became almost like a catchphrase for any sort of institutional abuse of power. What was interesting was trying to create an emotional character from a reputation that’s very cold…trying to figure out every little detail about her childhood, her relationships, her sexuality. Because when people think of Ratched, they think of her as shutoff and cruel and uncaring.”

As with many Murphy projects, Ratched is headed up by frequent muse Sarah Paulson, who won an Emmy and a Golden Globe for her role as real-life lawyer Marcia Clark in Murphy's The People vs. O.J. Simpson and has been nominated for five other Emmys under the super-producer's tutelage. (She will soon return to her post as an American Horror Story mainstay for the pandemic-delayed, Macaulay Culkin-starring tenth season.) But with Ratched, which she also co-produced, Paulson was forced to tap into some very dark parts of her psyche.

“I identified very deeply with her loneliness," Paulson told Vanity Fair. "I think ultimately at the end of the day, that is sort of what drives Mildred — a pursuit of survival and of finding some sense of home. Even though the methods that she chooses to achieve that internal security are somewhat questionable, I would argue that she’s doing them with a potentially selfish need, but a survival need nevertheless. Sort of an animal need that blinds her to the inappropriateness of some her actions.” According to the actress, “By the time you get to the end of the first season, you will not wonder how and why Mildred became the way she did...you will understand it. It will make sense to you.”

In the official plot summary, Netflix describes Ratched as "a suspenseful drama series that tells the origin story of asylum nurse Mildred Ratched. In 1947, Mildred arrives in Northern California to seek employment at a leading psychiatric hospital where new and unsettling experiments have begun on the human mind. On a clandestine mission, Mildred presents herself as the perfect image of what a dedicated nurse should be, but the wheels are always turning and as she begins to infiltrate the mental health care system and those within it, Mildred’s stylish exterior belies a growing darkness that has long been smoldering within, revealing that true monsters are made, not born."

In addition to Paulson in the titular role, Ratched will also star Basic Instinct's Sharon Stone as an "eccentric heiress"; Daredevil's Vincent D’onofrio as a "leering politician"; Sex and the City's Cynthia Nixon as his campaign manager; The Deuce's Corey Stoll as a private investigator; Feud's Judy Davis as a "no-nonsense" nurse; Teen Wolf's Charlie Carver and Top of the Lake's Alice Englert as staff members at the hospital; and Paulson's AHS co-stars Finn Wittrock as a mass murderer (once again) and Jon Jon Briones as a "pioneering physician subjecting his patients to controversial treatments." Hotel Rwanda's Sophie Okonedo, Love's Liz Femi, and more will also appear in other roles.

Ratched premieres on Netflix on September 18th. Check out the official poster below.