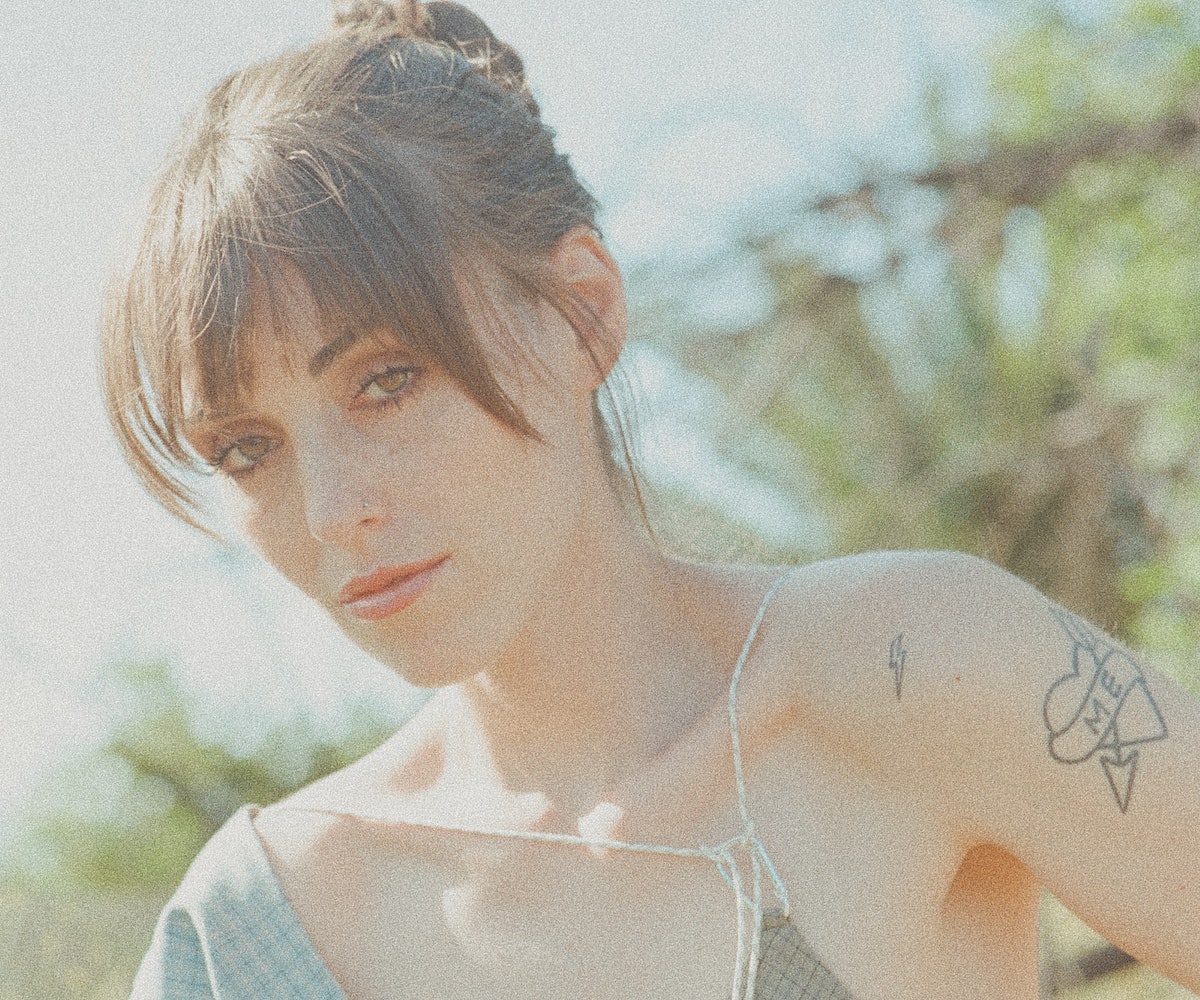 “I think this album is the first time I really trusted my gut,” Sasha Sloan says one recent Friday morning. The 25-year-old songwriter is referencing Only Child, her debut full-length collection of wistful folky-pop songs that tackle seemingly everyday anxieties with generous consideration.

Since her days working as burgeoning songwriter in Los Angeles at 19, Sloan has built the foundation of her career crafting immaculate pop hits for artists such as Camila Cabello, Charli XCX, Tinashe, and Katy Perry. But she was never fully satisfied. “I grew up listening to folk and more common music and Jazz, and then I moved to L.A. and got signed as a pop songwriter,” she recalls. She got thrown into pop songwriting-bootcamp, excelled (clearly) — “and then I got really confused about who I was.”

In many ways her debut album became the path back to finding herself, with many of its stories wind all the way back to her upbringing. Following three previous EPs, Only Child, trades the heartbreak and anxiety-exploration of her previous projects for realer, and arguably more daunting, topics — and does so gorgeously. The title track, all gentle guitar and piano, is basically the quietest existential crisis about the real and true loneliness of being an adult only child as your parents are slowly aging. It’s sad, but it’s also complicated; “This is more sad-woman Sloan,” she says.

Earlier this year, Sloan made the move to Nashville with her boyfriend after seven years in L.A. Speaking from her new home, she details the parts of her career that still feel surreal, what it was like growing up as an only child, and her transition to writing more mature, sad-woman songs.

Was there a key song, when after you wrote it, everything kind of clicked into place and you were like, "Okay, this is what the project generally is going to be about"?

So the first song I wrote that I knew was going to be on the album was, “High School Me,” which is the last song on the record. I wrote that with Shane McAnally and he's an amazing prolific songwriter who's on Songland and he's written for all the big country stars. I came up with the title, but I started writing it as a joke. And then I brought it to him and he was like, "No, this should be meaningful and actually talk about how much high school affects your psyche." We had a very similar high school experience. That was the first song I was like, "Wow, okay. This is the emotion that I want to create, the rest of the album." And it kind of went from there. That was the song that I held the others up to.

“High School Me” is where you’re kind of admonishing how younger you wouldn’t believe what your current life is like. What part of your life or career still feels kind of surreal to you?

I mean, I think just the fact that I met a boy who likes me back. That's been huge. I never thought that was going to happen. I was that kid in math class, writing lyrics down in my notebook, and I always wanted to do music. I had this really jaded mentality about it as a teenager. I didn't know anyone in the business and I didn't know how to do anything but open mic in Boston. I had kind of already given up on being an artist in high school but I knew I wanted to do music, in some way or another. I just didn't think I'd ever be able to make a living as an artist and songwriter, which is what I'm doing now. And I think if 15 year old me could see my life now, she'd be really, really stoked. But that's something I need to remind myself daily, because I forget about that sometimes.

What’s something surprising that you learned about yourself while you were making this record?

I think I realized I'm more jaded than I thought I was.

I don't know, this year has been one car crash after another, which has also been a really interesting time to release the record. But the album, I think it's the more mature version of me. On Twitter my handle is @sadgirlsloan, and I think this is more sad woman Sloan, because there's a big difference from 21 to 25. I think it's just a little more grown up than my other stuff.

Would you say that you're a pretty introspective person usually?

It's hard for me to say that I'm introspective, because I don't know how other people think. But I think, I definitely stop and think about things that maybe people who aren't songwriters don't or... I don't know. I think I'm just a very sensitive person and I feel things easily and maybe because I've been a songwriter for so long, I subconsciously try and see the world a little differently than other people. I think also so much therapy has made me overthink everything.

How did “Only Child,” the song, come about? What were you thinking when you wrote that track?

I always start songs with concepts or titles, and I had the title, “Only Child,” written down in my phone for a while, and I didn't really know how to write it. I knew that I loved the title, but I didn't know what the angle was on being an only child. And so I wrote this song with Shane and King Henry, and we're just sitting down and we started writing and I was like, "I have this idea called ‘Only Child’ and I'm not sure what it means." And then Shane just said, "Oh, it gets lonely being an only child, just pour it out." And I was like, "Wow, that's amazing." And then that song was written really quickly. I think it took an hour, top to bottom and it just kind of poured out and weirdly that was one of the most emotional songs I wrote. I don't really get emotional while I'm writing. I usually get emotional after. But that was one that I actually started to feel as I was writing because I felt these siblings could have existed, and they didn't.

Why do you think it was such an emotional process for you?

When I was growing up, I always wanted siblings for a lot of different reasons. When I'd go over to my friend's house, who had siblings, the home felt full, you know what I mean? I always wanted someone that I could fight with, who was my own age and someone who could have gone through the same upbringing that I did and kind of have someone to be like, "Hey, this is kind of crazy, right?" But instead I was doing it alone and I really envy people who have those built-in best friends. I know that's not true for all siblings, but if I get married someday, I don't know who my maid of honor is going to be. It just made me crave that bond siblings have. It's different from friendship, and I never got to experience that.

Another track that kind of feels similarly to me is your song, “Santa's Real,” where you're kind of just talking about how you wish the world was a better place. How has it been witnessing the state of the world, from your perspective, for the past couple of months?

That song came from being in a supermarket at the very beginning of quarantine, when masks were mandated. And it was super freaky. I mean, just seeing everyone in masks is still unsettling. So my boyfriend and I were in the grocery store and I saw all these kids running around with masks on. I was standing there super freaked out and they were just having a good time. And I looked at my boyfriend and I was like, "Wouldn't it be so sick to be a kid right now?" You know something bad is happening and you know you have to wear masks and things are different, but you don't fully understand why. And it's not weighing down on you all the time and you have adults to protect you. And in that moment, I kind of realized like, "Oh f*ck, I'm the adult now, in this situation." So definitely an interesting year, but that song was directly inspired by 2020.

Are you feeling hopeful for the future?

I mean, I never am, in general. I think it's such a scary time right now, especially in the U.S., that it could really go either way at this point, and all I can do is vote and cross my fingers and hope that we find a vaccine and things get better. I am hopeful, because countries have been in crisis before as you learn in history class and things always get better. It always comes back to normal, at some point. It's just unsettling, not knowing when that's going to be.