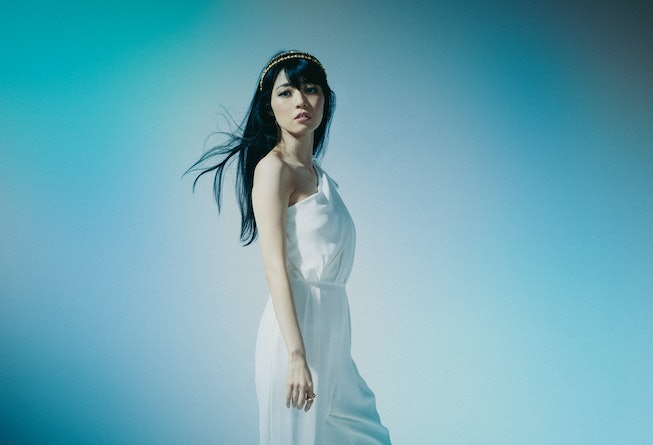 Pop artist and singer-songwriter Sena Kana knows that we don’t always have the right words to express what we’re feeling — but that we have to try anyway. On her new track “Show Me,” produced by Justin Bieber collaborator Poo Bear and featuring Ty Dolla $ign and premiering below, Kana explores the limits of language and the importance of proving your love through actions, not words.

"'Show Me’ is about the anxiety of not being able to convey what you want to say and highlights the importance of making an effort to show someone how you feel,” Kana tells NYLON. “It’s a song about the hope that comes from that effort of trying to connect with someone even when it is difficult.”

Ty Dolla $ign adds: “‘Show Me’ is all about that magic that happens in collaboration. It was originally brought to me through my brother Poo Bear and with his incredible production merging with Sena’s one and only voice, I knew it was a hit the moment I heard it.”

Infusing pop and R&B to create a refreshing sound, “Show Me” is a soulful sonic fusion lifted by Kana’s soaring, ethereal vocals. Watch the “Show Me” video below and read on for an interview with the Japanese artist:

How did "Show Me" and the collaboration with Ty Dolla $ign come about?

The collaboration with Ty Dolla $ign came about organically, after I was introduced to him by my dear friend, Poo Bear. “Show Me” started while Poo Bear and I were working on my debut EP last year. After we had finished writing the single, we felt like we should look to add another artist to the mix. Poo Bear connected me with his friend Ty, who was interested in the song after his first listen. We were also asking our friends, and in that time we asked around, Ty had written his part and recorded it, sent it over to Poo Bear and we both instantly knew that this was the perfect feature. Thanks Poo Bear & Ty!

You're the first female solo pop artist out of Japan to hit Gold status on a US release. How does that feel?

It feels great to have accomplished that, not just for myself, but also for other Japanese artists who dream of crossing over to the US. “Up” was a special record for me, and working with Wiz Khalifa and Sheppard made such an impact internationally. It was amazing to see it take off and see the positive response to the track and music video. I’d like to keep aiming higher and continue to sing in the hope that even one more person will be lifted up by my songs.

"Show Me" was made in collaboration with Ty Dolla $ign and Poo Bear. Who else would you like to collaborate with in the future?

I’m not sure exactly who I would want to work with next. I have enjoyed collaborating with Poo Bear on my last few projects and I would love to continue working with him, but I would be open to working with more artists and producers who share my vision for creating peace and spreading that message to our audiences.

What do you want your international fans to know?

I have the same message for all of my fans, whether they are from Japan, the US, or anywhere else in the world. My ultimate goal is to make the world a more peaceful and kinder place. There are many people who are still suffering from COVID, and of course for other hardships. I would just want my fans, and everyone in need to know that I will continue to make music that is a catalyst for positive change in their life, and the world around them.