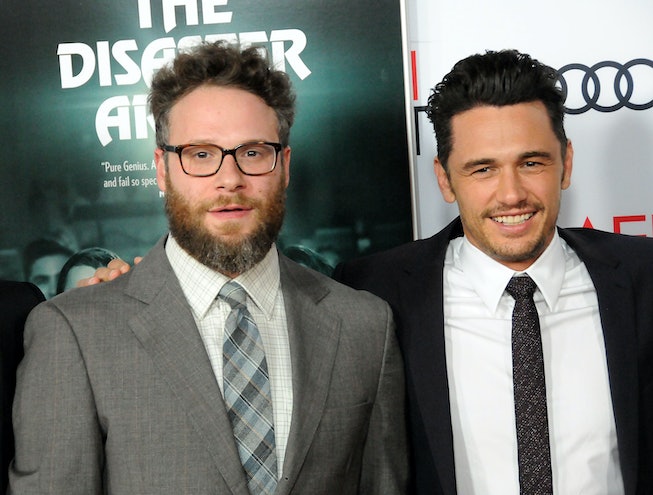 After decades of working side-by-side in Hollywood — starting as early as 1999, when the pair both appeared in the gone-too-soon cult classic teen dramedy Freaks and Geeks — Seth Rogen and James Franco will apparently be working together no more. Following numerous allegations of sexual misconduct made against Franco, Rogen has finally stepped up to publicly declare that he has no plans to work with the disgraced actor anymore.

In a recent profile in The Sunday Times — where, amongst other things, Rogen opened up about his public adoration for drugs and how his edgy mid-aughts stoner comedies have aged in our current cultural climate — the Emmy-nominated comedian, actor, writer, and director offered some comments about where his relationship currently stands with his old pal James Franco.

“I don’t know if I can define [our relationship] right now during this interview,” he told the British newspaper about Franco.” Referencing the multitude of sexual misconduct allegations that have been made against Franco over the past several years, Rogen added, “I can say it, um, you know, it has changed many things in our relationship and our dynamic.” Later, Rogen also clarified that the fact that he and Franco haven’t worked together in some time is “not a coincidence.”

“I also look back to that interview in 2018 where I comment that I would keep working with James,” Rogen continued, “and the truth is that I have not and I do not plan to right now.” Though Rogen admits that his split from Franco has been “painful,” he specified that it is “not as painful and difficult as it is for a lot of other people involved. I have no pity for myself in this situation."

Rogen’s comments follow accusations from actor Charlyne Yi, who recently disclosed, in an Instagram post, that she quit working on Franco’s The Disaster Artist due to the allegations of sexual misconduct leveled against him. “When I tried to break legal contract & quit Disaster Artist because James Franco is a sexual predator, they tried to bribe me with a bigger actor role,” she wrote. The actress then added that the bribe brought her to tears, noting, “[I] told them that was the exact opposite of what I wanted, that I didn’t feel safe working with a fucking sexual predator. They minimized and said Franco being a predator was so last [year] and that he changed...when I literally heard of him abusing new women that week.”

And according to Yi, Rogen, who was a producer on the Oscar-nominated film, was not innocent — in fact, she claims that he enabled Franco’s behavior. “Seth Rogen was one of the producers on this film so he definitely knows about the bribe and why I quit,” she clarified in the caption of her post. “Seth also did a sketch on SNL with Franco enabling Franco preying on children. Right after Franco was caught.”

Responding to those accusations, Rogen told The Sunday Times, “What I can say is that I despise abuse and harassment and I would never cover or conceal the actions of someone doing it, or knowingly put someone in a situation where they were around someone like that.”

And as for the Saturday Night Live sketch, where Rogen crafts an elaborate joke about pretending to be a 17-year-old girl to entrap Franco into meeting him at the Ace Hotel — mere days after Franco was actually exposed for trying to arrange a hotel meetup with a Scottish girl who very clearly said she was underage? Rogen responded, “I do look back at a joke I made on Saturday Night Live in 2014 and I very much regret making that joke. It was a terrible joke, honestly.”