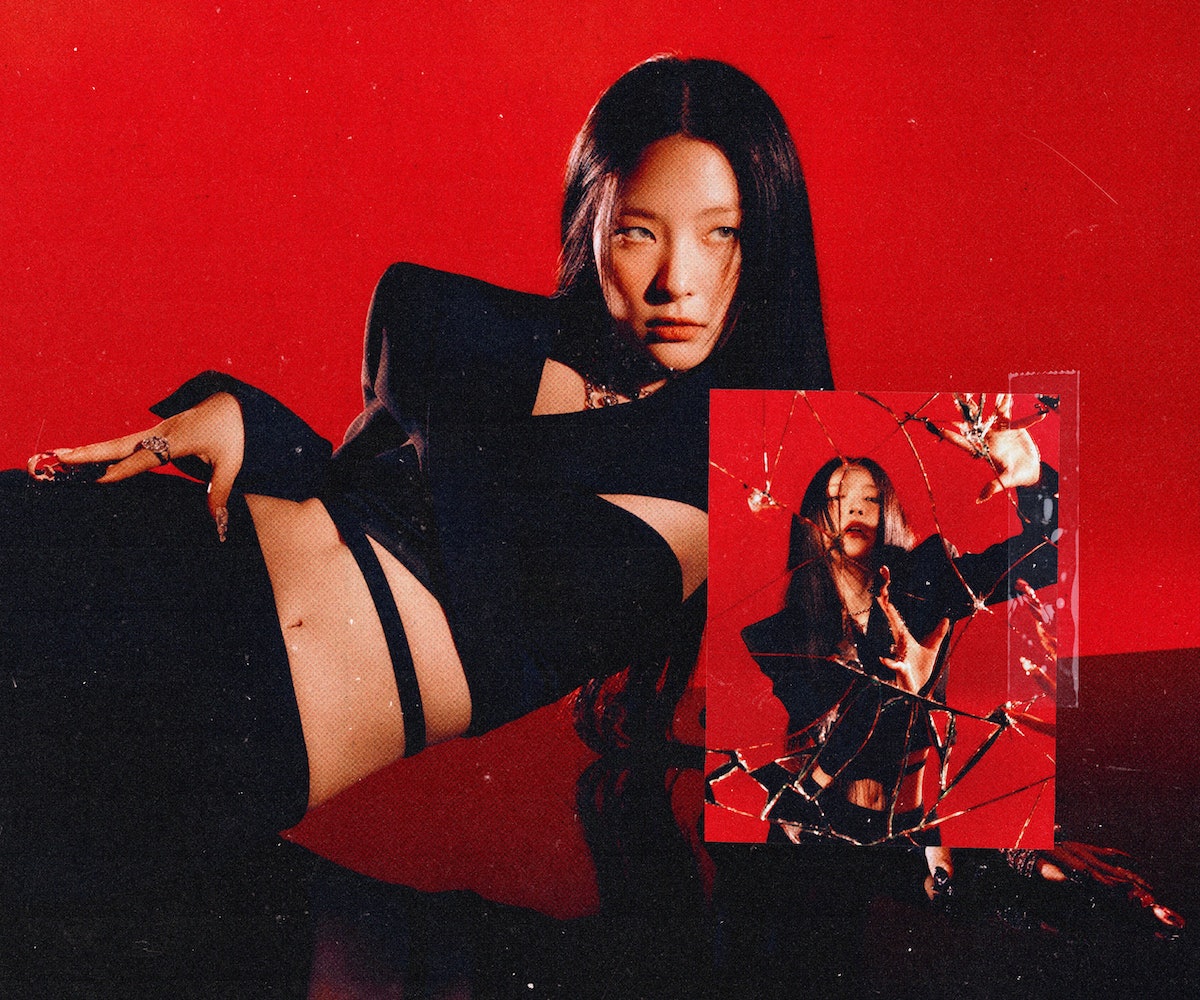 During one of the many company meetings in preparation for her solo debut, Seulgi reflected offhandedly: “Good and evil people are not clearly distinguished. Good and evil coexist within one person.” This thought ended up framing the entirety of her debut EP, 28 Reasons, out now. It appears on the cover of all its versions like a subtitle and defines the way she portrays Snow White and Grimhilde (the Evil Queen) in its teaser images, looking heavenly yet diabolical at the same time. It serves as the central theme of the cohesive six-track collection — a register of Seulgi’s best skills as she navigates dark and tempting narratives.

As the Red Velvet member’s first solo exhibition, nailing down the perfect concept and sonic identity of 28 Reasons was crucial to the project and also the most difficult part of the creative process. “There was a lot of contemplation and personal reflection,” the 28-year-old singer tells NYLON over Zoom. “I was wondering, ‘Should we do something mainstream that a lot of general people would like? Or should we do something that only Seulgi can do?’”

She only achieved clarity after she listened to the demo of title track “28 Reasons,” which many of her team members singled out as a perfect fit for her. “I leaned towards doing a concept that best portrays myself,” she says. “And the rest of the album just naturally fell into place when I set that direction.”

The haunting elegance of “28 Reasons” couldn’t fit anyone better. In the music video, Seulgi plays with the viewer like a cat with its prey. Draped in leather and chains, she sings defiantly and seductively, “The more you break, the more you’ll want me.” She embodies the character so naturally that the average person would never expect it to be the same bubbly, smiling woman on the screen of this call right now — but coexistences are inherent to Seulgi’s artistry.

From her early memories of growing up in her hometown of Ansan, South Korea, she recalls loving to sing and dance, even recording covers of artists that were on TV at the time. “I realized that ‘Oh, this is something that makes me really happy, it's something that I think I'm really good at,’” she says. The covers turned into auditions, and in 2007 she joined SM Entertainment, one of the largest South Korean entertainment companies. In 2014, Seulgi debuted as a member of Red Velvet, a quintet that built its discography upon two distinct concepts: the effervescent “red” and the sultry “velvet.” Throughout the years, she emerged as not only the assigned main dancer of the group, but also as one of its vocal pillars.

Often dubbed an ace of K-pop, Seulgi and her talents don’t stop at being a girl group member. Throughout the years, she’s had a number of duets and collaborations across the industry, including a subunit with fellow Red Velvet member Irene, and the debut of supergroup GOT The Beat in January 2022. Her nonchalant-chic fashion inspires many and led her to host her own radio show, Seulgi.zip, on Naver NOW. She is the face of several campaigns for brands like Converse Korea, Coca-Cola and Volkswagen. She also draws (28 Reasons features some of her artwork), dabbles in photography on her side Instagram account, and, most recently, tried her hand at writing lyrics for her song ‘Dead Man Runnin’,” which were chosen through SM Entertainment’s in-house blind test.

In K-pop, being an “all-rounder” is almost a prerequisite: Idols need to sing, dance, and charm global audiences, and they need to do it well. However, to say that about Seulgi feels like an understatement, a diluted description of all the intricate ways she stands out as a performer. The first thing one sees is her striking features — sharp yet soft, immediately recognizable no matter the hair or makeup style she’s wearing. Then, her silky voice echoes, followed by effortless dance moves that demand attention. It’s hard to miss her on stage and even harder not to be stunned by her presence.

“During my debut [with Red Velvet], because everything was my first time and I didn't have a lot of experience, I remember always wanting to do the best,” she recalls, looking up and humming as the memories came forward. “I was almost restricted, in that I only did what I was told. Now, I’m a little bit more flexible and more relaxed, and I can be more fluid in terms of my decisions, actions, and my work as well. I think you can see that fluidity in my [album].”

For Seulgi, the constant back-and-forth of embodying different Red Velvet concepts was essential to bringing out the multifaceted delivery of her solo debut. “It helped me to concentrate better and transition [between] both [concepts of] good and bad,” she says.

Working on the album also gave her plenty of time to think about this dichotomy. In a behind-the-scenes video about the making of 28 Reasons, she reflects on her own dark side, though says she’s never gotten “negative enough to want to ruin someone” despite past hardships. She considers herself to be a generally positive person. “Rather than feeling bad and hurting other people, I think it's [better] to choose to be good and bring up the best versions of yourself,” she says.

Through daring exploration of themes ranging from post-heartbreak despair to blissful escapism, 28 Reasons showcases the best of Seulgi. “This album has every skill and strength that I wanted to appeal to,” she says. Her voice portrays vivid misery on the dramatic “Dead Man Runnin’,” and regal dominance on the somber R&B cut “Crown.” On the melancholy duet with rapper BE’O, “Bad Boy, Sad Girl,” she lets her vulnerable side come forward, mulling over her feelings during a sleepless night. “Anywhere but Home” recalls the laidback, breezy vibes of Estelle’s “American Boy,” and the mind-numbing techno drop chorus of “Los Angeles” contrasts starkly against Seulgi’s ethereal verses.

28 Reasons isn’t just a portrait of a singular star in bloom; it’s her gateway to a promising future. “I want to become an artist that everybody can look forward to what kind of thing I will do next,” says Seulgi. “Not just be impressed with what I brought out.”

At the end of our conversation, Seulgi then vehemently asks me to include — in all caps — that “This project [took] a lot of effort and time, not just mine but of a lot of people involved.” More than anything else, working on her solo debut taught her that none of it would be possible on her own.

“This was a moment where I took the time to understand how much work everybody else has put in,” she says. “I feel proud of this album not because I found great strength or skills, but rather because of how a lot of people came together and gave [it] their best.”