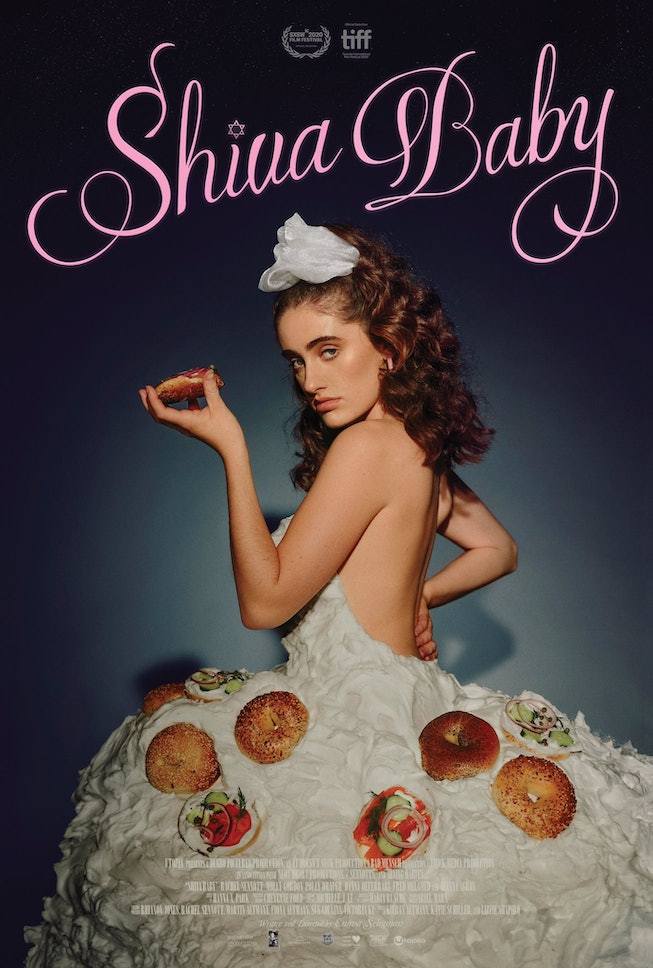 No one wants familial and romantic chaos to collide, but when it does, it's a beautiful disaster. It's also the very premise for the buzzy, debut feature film by Emma Seligman, Shiva Baby. Starring comedy princess and rising indie darling Rachel Sennott, the film has charmed the festival circuit as one of the breakout hits of South by Southwest and the Toronto International Film Festival, and is now finally getting a theatrical run and VOD order.

Shiva Baby's trailer give a peek into the its hilarious and claustrophobic world, following Sennott's Danielle as she attends a shiva — a Jewish funeral service — turned absolute hell on Earth. Danielle's parents are pestering her about her future, her bisexuality is on trial, her high school ex-girlfriend is in attendance, and if things couldn't get worse, she spots her sugar daddy, along with his wife and newborn baby. Unconvinced parties need only look at the film's stunning poster — Sennott dressed to the nines in Jewish deli couture is nothing short of pure camp.

"Shiva Baby is about the exhilaration, insecurities, confusion, and horror that accompany young female sexuality and the realization that your sexual power isn't as far-reaching as you may hope it to be," Seligman said in a statement to Entertainment Weekly. "I think many young women feel the contradictory pressures to seek future husbands and stable careers while somehow also being independent and sexually empowered. I wanted to showcase the emotional roller coaster these pressures can create and give young women a chance to feel seen, alongside being entertained."

Watch the Shiva Baby trailer below, and catch the film in select theaters and VOD on April 2.