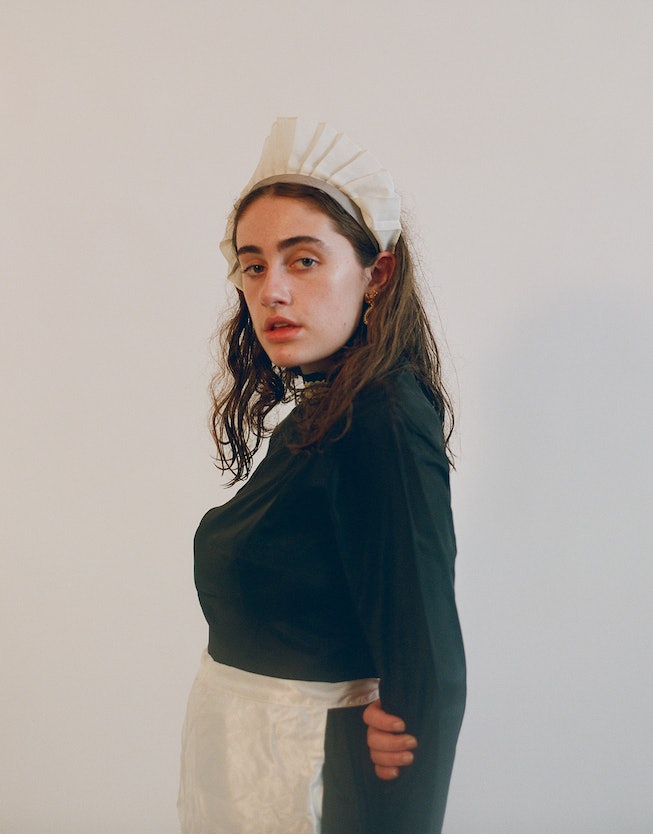 These days, Rachel Sennott is in the business of boosting morale. For the 24-year-old actress and comedian, that doesn’t mean banging pots and pans for essential workers. It’s more nuanced — like answering emails and cooking in her “work uniform,” which just so happens to be a baby pink, leopard print bikini and heels. It’s images like this that represent Sennott’s unique strain of comedy, one that turns the concept of a “hot girl” on its head with frank observations, confessions, and a little bit of insanity. Through her blistering stand up sets, original shorts, and online presence, Sennott has turned the phenomenon of f*ckboys and reply guys into an anthropological study.

Sennott’s Twitter holds evidence of the expanses of the male psyche; DM screenshots ranging from lewd comments to doting followers who ache for a chance to take her out to a pasta dinner date, all begging for her attention and the chance to be immortalized. This devotion can be fun to toy with, she explains to me while standing on a chair to get better reception from her parents’ house where she’s isolating in Connecticut.

“I feel like I’ve reached the point where I’m like, ‘OK, none of these guys are going to kill me.’ I post my location all the time, and so far I haven’t been murdered. So I feel like they’re joking,” she says. “Sometimes I’ll play with it. One time I tweeted, ‘Do any men want to call me and tell me they love and that they would die for me?” And a bunch of men sent me voice memos going, ‘I love you and I would die for you.’ I love listening to them, they’re so good.”

It’s this type of awareness that makes Sennott a cut above the rest. Reply guys are at her beck and call — if she’s in the mood for it. It extends to her Instagram persona, an account that firmly eschews coyness in favor of the deadpan. “I think the way women are perceived on Instagram is that you have to be hot, but it also has to be a secret,” she explains. “I think it’s funny to go all the way, like I am going to wear a bikini while I walk my dog to boost morale for people in my parents’ neighborhood.” Sennott takes gauche and coquettish concepts — like holding a dog over one’s bare breasts — and spins them into comedy gold every time.

“When I first started comedy, I didn’t know about the alt scene and I just started doing open mics in Manhattan and a lot of them were just horrible,” Sennott remembers. “I would be the only girl, everyone would be a 35-year-old who drove in from New Jersey to joke about how he wished his wife was dead. It just sucked and I never thought I could really do well there. Even if I was getting a laugh, it always felt like it was laughing at me, and not with me.”

The shift came with Sennott’s first big booking in the alt scene: Cohen, Mitra Jouhari, and Patti Harrison’s delightfully deranged monthly show It’s A Guy Thing. It was the opposite of the comedy clubs; everyone was kind, welcoming, had a sense of personal style, and most importantly, was hilarious. The audience was primarily young NYC-dwellers, anyone who could afford the tantalizingly low five to ten dollar tickets that came with no drink minimums. Sennott’s jokes landed in this environment. The audience truly got her because they were like her themselves; twenty-somethings navigating the hellscape of dating, horniness, insecurity, and the pangs of growing up. It didn’t take long for Sennott to become a staple performer in the alt crowd, and with it, her relatable comedic voice had the chance to flourish.

Her voice is now distinct; there’s a certain type of “messy” that is strictly Sennott’s. “Guys are always looking for a full-time freelance relationship,” reads one seminal tweet, a succinct evaluation of the shortcomings of both the broken romantic and job markets. Her confessional air breeds familiarity. Men aren’t the only ones flocking to her inbox; young women fans often message her, ready to spill about their latest triumphs or despair in love.

Sennott meets these girls with empathy. After all, these are the people she’s speaking to in her comedy most directly. “Sometimes a girl will DM me like, ‘I just hooked up with my ex, I’m being super toxic. Slay girl!’ and I’m like ‘Oh, no! That’s not what I meant for you to do,’” she says. “I obviously want to perform for everyone, but I want to perform for young women a lot.”

Sennott’s creative wheelhouse extends beyond live performances and celebrated shitposting. She’s working on a Comedy Central digital series with fellow comedian and friend Ayo Edebiri, developing scripted projects with Patriot Act writer Moss Perricone, and with and her training as an actress from New York University’s Tisch School of the Arts has landed her roles in HBO’s High Maintenance, the lead in Emma Seligman’s independent family drama Shiva Baby, and the ABC comedy pilot My Village.

Set for a South By Southwest debut, Shiva Baby was meant to be Sennott’s big indie movie premiere. As it turned out, the festival was called off in one of the first waves of cancellations over public safety in the midst of the COVID-19 pandemic. Sennott still celebrated in style; she and her family dressed up for an at-home “quar” premiere, including the tiny, floppy-haired family dog, who wore a custom dress sewn by Sennott’s mother.

One of Sennott’s most viral hits is a snapshot parody of movies set in Los Angeles, set to “212” by Azealia Banks — a likely nod to Sofia Coppola’s The Bling Ring. “Come on, it’s LA,” she beckons in the 18-second video, which features her spinning in front of the camera in what could easily be an Adderall-induced craze. “If you don’t have an eating disorder,” she grins, her eyes visible under a pair of Bella Hadid-core tiny sunglasses. “Get one, bitch!”

With her success comes plenty of sour haters. Sennott’s naysayers love to reduce her work to her physicality, angry that a young woman can acknowledge being sexually confident or feeling hot, and still poke fun at it on her own terms. “Sometimes I’ll see posts from bitter, ugly-ass dudes saying, ‘Oh, comedy now is just jokes about being hot?’” she says. “You can’t be mad at people for being funny and putting on cool pants. You can get pants, too, if you want!”

The magic of Sennott is that you can always spot the truth in her writing. It’s exaggerated, sure, but you would be pressed to find something forced or fabricated. The online and offline versions of herself are never too far apart, the type of honesty that makes her fans feel connected to her and pushes her humor into ubiquity. On a quarantine Zoom call catching up with friends, someone brings up one of Sennott’s tweets. “Did anyone see that tweet by Rachel Sennott?” my friend asks the group before reciting it. “Connecticut is basically LA if you listen to the right music and close your eyes a little.” We all burst out laughing.

NEXT UP
Life
An Exhaustive Breakdown of Ezra Miller’s Run-Ins With The Law
Life
Yes, Sydney Sweeney Has Seen All Your Euphoria Memes
Entertainment
Maneskin's "Supermodel" & 9 Other New Songs Out This Week
Entertainment
Joe Alwyn & Alison Oliver On Playing Characters Who Can't Communicate