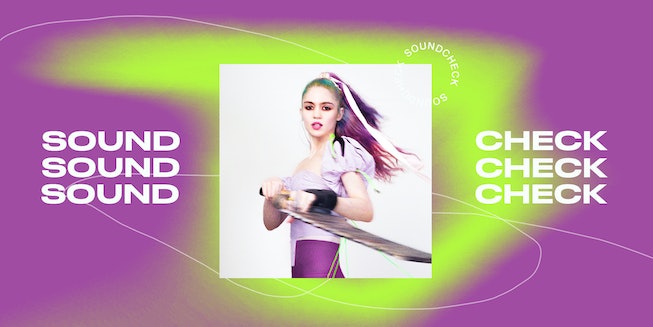 Every weekend, we bring you #SOUNDCHECK—your destination for the best new music that hit the web over the course of the week. Because you should always be prepared when someone passes you that AUX cord. This week's roundup features 15 selections from of our favorite emerging and established artists. Turn up, tune in, and tune out.

Blessings abound this week for Grimes has finally delivered her highly-anticipated Miss Anthropocene album, an ambitious and pristine collection of pop heavily imbued with the anxieties of impending apocalypse; while Arca made her return with a clanging, clashing and chameleonic 62-minute track, "@@@@," one that sounds like it zipped down from some distant planet hundreds of light-years ahead. That felt like a common theme: artists are trying to chase the sounds of the future.

Elsewhere, Purity Ring made their five-year return with "Stardew," a twinkling number that sits as delicately as early-morning condensation. And the gloom monster (an affectionate title) King Krule softened up as he mused on about fatherhood. There's also plenty for your ears to gobble up — continue on for the best tracks.

With a title that channels the infamous Justice League villain, "Darkseid" delivers a mood fit for an action sequence.

A calm-inducing cut to reduce your cortisol levels.

Christelle Bofale's plea for a world on fire is the prettiest you've ever heard.

Purity Ring replicates the wide-eyed magic of opening a music box with "Stardew."

Azealia slows it down for this one-minute track that's deserves to be much longer.

Kodie Shane meets guitar in this smooth and nostalgic track.

62 minutes of the future.

King Krule's typical gloom is awash with baby pink, as he muses about fatherhood.

Waxahatchee's perfect folk feels like it unwinds in sync with a lilacs' life cycle.

The song to request at the club on your Friday night.

As the weather thaws, so does my sex drive.

A breakup song and a bop all in one.