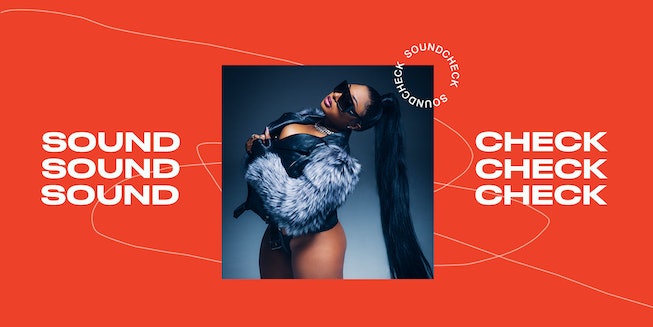 Every weekend, we bring you #SOUNDCHECK—your destination for the best new music that hit the web over the course of the week. Because you should always be prepared when someone passes you that AUX cord. This week's roundup features 11 selections from of our favorite emerging and established artists. Turn up, tune in, and tune out.

As the outside world gets progressively worse and closer to apocalyptic, at least there are Good Tunes to temporarily staunch everyone's anxieties. At least, that's the silver lining I'm tenuously grasping onto these days. That said, music did declare loud and clear that this week would be the week of immaculate returns. Cue the Dixie Chicks, dropping their incredibly good and wonderfully eviscerating track "Gaslighter" after fourteen years of silence. Listening to the timely lyrics and the catchy hook, it's like they never left.

On the other end of the spectrum, the internet's favorite raunch-rapper CupcakKe also resurfaced after a few quiet months with "Lawd Jesus," the same phrase she'll have everyone else saying as they fan their necks, pressing play for the umpteenth time. And as the cherry on top of this extra-draining week: Lil Uzi Vert finally released his highly-highly-highly anticipated album Eternal Atake after teasing it 599 days ago — yes, someone really did crunch the numbers. Elsewhere in the world, PC Music's Planet 1999 has seen the future, and it's really just the past but better. Along with it, Berlin-born HAWA drops off a tidy, micro-sachet of pure fire that I desperately need more of. Hear all of the above, and more, below.

Dixie Chicks has returned with a huge, wonderful, and incredibly-timely middle finger to the world's gaslighters.

The junk drawer in your house if it was music: bewildering and wondrous.

"Give Me Another Chance" - Empress Of

Empress Of goes dance with this hyper-hypnotic cut.

Rina Sawayama brings it back to early aughts Britney Spears.