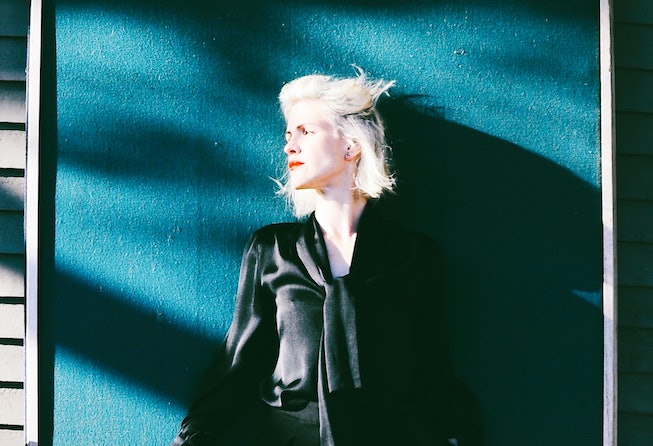 Spring Summer is the recording project of San Francisco-based musician Jennifer Furches, who spent a large part of her career in the aughts making a name for herself by touring and playing with musicians like Cass McCombs, Coconut Records, and Ben Lee. About a year ago, in 2021, she finally launched her own solo career and released a couple of delicate, folksy guitar songs on Dangerbird Records. Now, Furches announces the arrival of her forthcoming debut album, T.E.A.R.S, out July 15 and produced closely by friend Jenny lee Lindberg of Warpaint.

Below, NYLON exclusively premieres the video of the album’s lead single, “Mountaineer,” a sturdier and more robust version of the indie rock first previewed by the musician and multi-instrumentalist. Over shuffling guitar and drums infused with a crisp and clean feeling, Furches works through overcoming life’s obstacles with a partner while maintaining self-preservation through writerly, graceful lyricism. “I’m tough as nails/ I am a mountaineer/ I will climb these jagged peaks and leave the valleys for you dear,” she sings. Any hint of tension in its lyrics is tempered by the song’s grand and sweeping sound, like you’re also perched on the mountain peak next to her.

Of the song, Furches writes in an email: “There’s a running theme on the album of losing yourself in another person, and this song is about the push-and-pull between the feeling of ‘I would do anything for you’ and ‘I can’t do anything for you, I need to be strong and do things for me.’”

In its miniature-filled music video directed by Jon Sortland, she captures that feeling of towering above everything else quite literally, recreating a haunting but cozy world through dollhouse sets and beautifully illustrated natural landscapes. Furches herself is seen interacting with the world through clever editing that makes it look like she’s inhabiting the sets, but is simultaneously caught setting them up in the first place — adding another meaningful layer to the song’s contemplation.

Watch “Mountaineer” below, and read on to learn a bit more about Furches. And be sure to catch her record T.E.A.R.S when it drops on July 15.

I’m sitting in my practice space in our garage in San Francisco. There’s nothing soundproof about it and I live on an echo-y alley, but luckily the neighbors don’t seem to mind that the kids and I have started a 90’s cover band.

What's the story behind your new song, "Mountaineer”?

I wrote the first incarnation of Mountaineer before I had kids. I was 4 years into a relationship, and kind of passing that puppy-love stage where you want to just do everything for someone and be with them all the time… and starting to feel like I had lost — or forgotten — about myself. Then after kids, many more years into the same relationship, the same feelings were hitting me. It’s so easy in life and love to give yourself away. I had to make a very conscious effort to find some balance.

I had never done anything with that song, but it was suddenly resonating heavily with me again. I played it for my cousin Jason and he had all these great suggestions to make it something new, which appealed to me. I loved the feeling of it having lived so long as one song, and then getting to transform it into another version of itself. As I guess I wished to do. (Thanks to Jen we recorded the old version, too — we’ll put that out one day!)

How did you land on the idea of using miniatures for your "Mountaineer" video; they're really having a moment right now.

I feel like miniatures have been heavily utilized forever! But I guess you mean maybe they’re being used in a more obvious way, as we did, rather than the old-school Hollywood trickery?

You know — I just loved Jon Sortland’s work so much! He made all these great videos for his band The Shins (a few of which use miniatures) and he is just constantly making things that make me laugh and reel me in. I feel like he finds a wonderful way of mixing the magical world and real life. So the miniatures came from his experience with them… but in the end when COVID hit and we ultimately had to call on my husband Roman to shoot my part of the video, I thought it was kind of a fun twist of fate because Roman has shot a lot of second unit and special effects work through his career which often involves miniatures — so I felt like there was a nice connection there between the two of them.

After spending a large part of your career playing with other artists, how does it feel to be releasing music of your own?

Great! For so many years I was scared to record my own music. It was so much easier to be a sort of hired gun (and of course also get to play with musicians I admired). But now I just want to do hard things. I want to learn, and challenge myself. It’s all one big puzzle… and I love puzzles!

In the spirit of the song, what's the last mountain you climbed and do you have a favorite?

Last summer: Chimney Rock outside of Asheville, NC with my dad and my sister Amanda. I’m from North Carolina and spent my life in those mountains. They hold a special place in my heart.