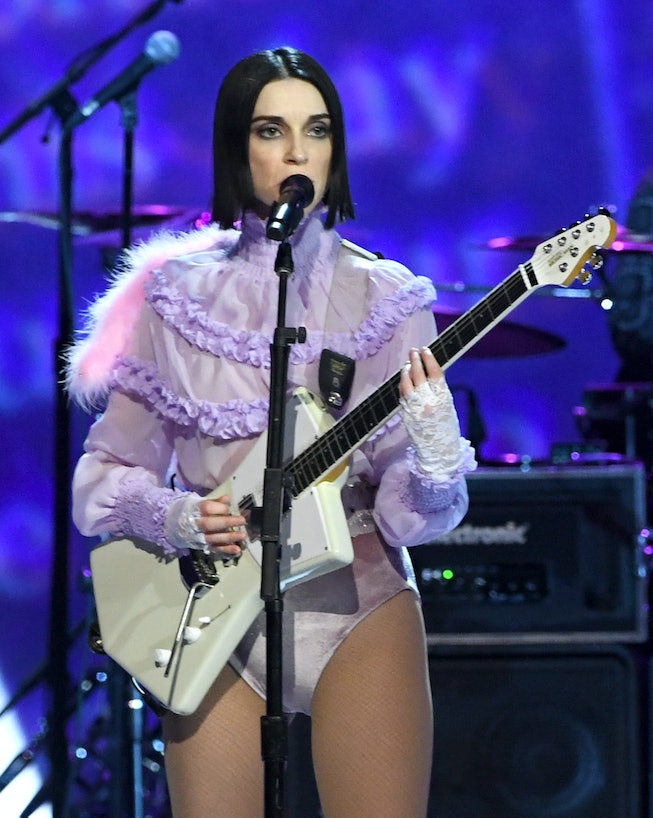 While it could be easy to dismiss the title of St. Vincent's forthcoming studio album as a byproduct of pop culture's recent obsession with the word "daddy," it turns out the name, Daddy's Home, carries a more intimate layer of meaning for the rock star. In a revealing interview with the Guardian's Laura Snapes, St. Vincent, real name Annie Clark, opened up about how her seventh studio album is inspired by her father's 2019 release from prison, and how his time incarcerated impacted her during her previous album cycles.

Although Clark's father was sentenced to 12 years in jail for being involved in a multimillion dollar stock-manipulation scheme back in 2010, the public didn't really learn about it until 2016, when the Daily Mail dug up the news in an article about her relationship with model Cara Delevingne at the time. Clark, however, continued to stay fairly mum about the topic, as she had since the beginning — that is, until now.

Speaking to Snapes, the article reveals that Clark often "flayed herself externally" during her Strange Mercy tour in 2012, just two years after her father was incarcerated, to cope with the pain. Additionally, the angularity of 2017's Masseduction in its skin-tight latex aesthetic and tight pop sound, Clark reasons, was also a manifestation of her using her art as a source of total control, as everything else around her was spiraling without it. "I think I got that rigid because the music was a deep lifeboat for me to get out of a bananas emotional space," she told Snapes.

"I’d been feral for so long," she continued. "Constantly on the go. Never grounded. Like halfway out of the rollercoaster cart, white-knuckling it. I was sort of in outer space. And it was cool — I don’t have any regrets. But I was pretty blotto for a while there.”

Coming into the new album, Clark says that in recent years she's been able to find healthier ways of coping and "less bonus pain" in her life by surrounding herself with "pretty grounded" people. Her father was also released from prison in 2019.

Later in the interview, Clark recounts a visit to see her father in jail, which ended up informing the empathetic and humanity-forward messaging of Daddy's Home. It ties in with lead single "Pay Your Way In Pain," which she wrote in 2020. "I was watching the various mechanisms of power crumble, or at least get rocks thrown at them," she told Snapes, perhaps alluding to the George Floyd protests from that summer. "And it seems like people have to make some Faustian bargain between dignity and survival. Everybody just wants to be loved. We want to have a little shelter and a little food. But we’re caught in a system that makes that hard for most people.”

On Thursday morning after weeks of teasing, the singer also shared the song and video for "Pay Your Way In Pain," a brilliant exercise in high-functioning chaos. It's a skeezy, psychedelic trip like no other, and finds Clark commenting on the taxes we pay for just existing at all. "Pay your way in pain/ You got to pray your way in shame." For its serious subject matter, the song is destined for the dance floor — and St. Vincent takes it there in its accompanying video.

Watch below, and read her interview on the Guardian.