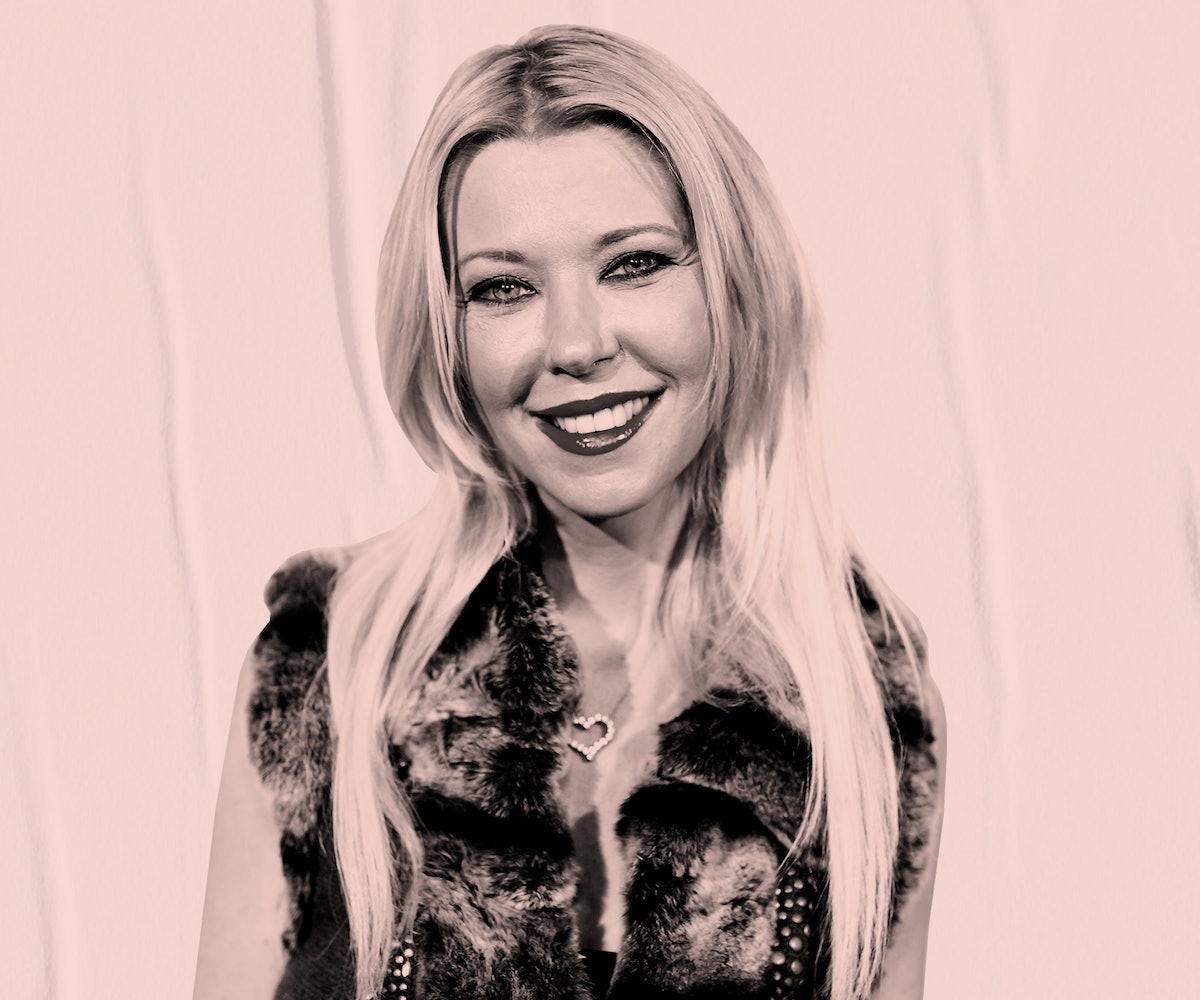 "If it came my way, it would be a great character to play, but you never know," Tara Reid says from her Los Angeles home via Zoom. "I think it's a great show and everyone is obsessed with it, but it's more of like rumors and possibilities." The '90s icon is in the middle of setting the record straight on what have these past months become a fervent — and supposedly "confirmed" — internet rumor that she will play the role of Carole Baskin opposite Nicolas Cage in a much-anticipated adaptation of the Netflix hit series Tiger King — encouraged ever so slightly, no doubt, by a rather teasing Twitter post from her at the time: "Hey all you cool cats and kittens RAWWWR," she wrote.

"[It's] kind of like how that Tara Reade thing was a Tara Reid thing, you know, how everyone has been going crazy lately?" she says. Owing to having the same name — but a different spelling and being different people — Reid found herself confused with Tara Reade, a former Joe Biden staffer who accused the presidential candidate of sexual assault. "I'm like what are they [Twitter] talking about? I had no idea and I'm not political. But I wish everyone the best in that situation."

One internet rumor that is true: Reid has been spending her time in lockdown with Jedward, John and Edward Grimes, the identical Irish twins from the UK's 2009 X-Factor reality television show. The trio met in 2011 while filming Celebrity Big Brother, also in the UK, and have been friends ever since. "They're like family," she says, and is happy to have had their antics (they're working on a new album) to keep her company.

During our Zoom call, Edward is playing "professional cameraman as a side job," as he declares off-camera. He's off to a rocky start though, as Reid, wearing a cherry-red Dolce & Gabbana top and sitting in front of a giant amethyst crystal, comes into frame upside down. "Is it working now? Yeah?" he checks, rectifying the situation as Reid's kohl-rimmed eyes and signature blonde hair are now back in focus. He later proves himself to be both a pet handler (Reid has two very cute dogs that join us) and PR prompter, as he helps hype the different film projects she has going on right now.

"It's probably my biggest year in my career. And it feels good," says Reid, now 44. Tiger King or no Tiger King, 2020 marks something of a comeback year for the actor. There's the dark drama 5th Borough, out now; her self-confessed "baby" Masha’s Mushroom with Vivica A. Fox, a psychological thriller in which we'll see a different side of her than we've seen before, she teases; and the UK comedy Tom, Dick & Harry "that's hysterical." There's also talk of a remake of the 1998 film Urban Legend, in which she starred alongside Jared Leto. "Obviously, I'm not going to play the same girl [Sasha Thomas]," she notes. Her Instagram also highlights a new movie called Dr. Quarantine (apt!), directed by White Cross, as coming soon. "So, there’s a lot of stuff!" she concludes.

Of course, quarantine has slowed things down a little. She hasn't left her apartment in close to four months — "and going stir crazy a little bit" — but has been relishing the opportunity to read new scripts. She's also been making the transition to producer, a role she has on Masha's Mushroom. "It was hard at first and definitely a lesson learned and I'll keep learning. Calling up the agents and not calling as an actor but the boss, as the producer, it's a whole different story," she reflects. "So feeling that respect that's coming back to me is incredible. Also, making those roles that I've always wanted to play, in doing so I've kind of turned the tables on it and it feels great."

Ask anyone their favorite Tara Reid role, and chances are at least three spring to mind (of course, there are more): American Pie; The Big Lebowski, in which Reid's poolside scene (involving nail polish and propositions) manages to upstage both Jeff Bridges and the late great Philip Seymour Hoffman; and more recently, Sharknado, the surprise camp hit that spawned five sequels and even a perfume, Shark by Tara. ("It's pretty, it's light, it's sweet, it's nice," Reid says, posing with spoof advert finesse.)

The unifying trait between all three of these films is their now cult status — even if at the time that wasn't necessarily always recognized. The Big Lebowski, for example, was deemed a box office disappointment with mixed reviews when released and Sharknado, with a premise of shark-infested freak hurricanes, was never going to be everyone's jam but became one of the most successful movie franchises of all time. Lucky be the actor who stumbles into just one cult movie during a lifetime; Reid has curiously managed to make an unexpected career out of it.

"It's funny everyone says that to me," she says. Of her own favorite roles, she brings up the 2001 musical comedy Josie and the Pussycats. "It was underestimated at the time, it was almost ahead of its time." Years later, in 2017, the L.A. Times wrote that its "sharply satirical vision of the hyper-commercial record industry feels only more relevant" and even Wikipedia has it revised as a cult classic. "I wouldn't take back anything I've done because it's made me who I am today as an actress, and the directors, and the relationships I have. I'm very happy to be where I'm at right now," says Reid.

Cult success, however, hasn't come without critics, and Reid has found herself no stranger to them both professionally and personally over the years.

"At first when I used to see things I didn't really like, it did hurt my feelings; if you cut me, I do bleed. But then after a while you realize you can't let all the people hating or bullying you [in], and you stop looking at it because it does hurt," she says. "I pretty much ignore it as much as I can. And some of the stuff that's absolutely ridiculous I can take a laugh on."

Meditation is something, she's discovered during quarantine, that can help with that. "It's absolutely the best thing I've ever done in my life. I've seen my life even change, I feel better, I feel happier, I feel [about] friendships differently, career[-orientated] more." There's also a newfound obsession with period pieces ("We just finished Vikings and it was incredible. Even if [the show is] a little bit older, and it has a British accent, then I'm pretty much into it.") and cooking ("I'm a great cook. I don't mind bragging about it."). Perhaps a Tara Reid cookbook is part of the 2020 comeback plan? "I guess I could do that for sure, but everyone has a cookbook these days." She's not wrong. "I love what I do and I don't know what else I would do, but I'm expanding and doing different things, which everyone is doing so why not? And it's a lot of fun and very creative. We'll see what happens."