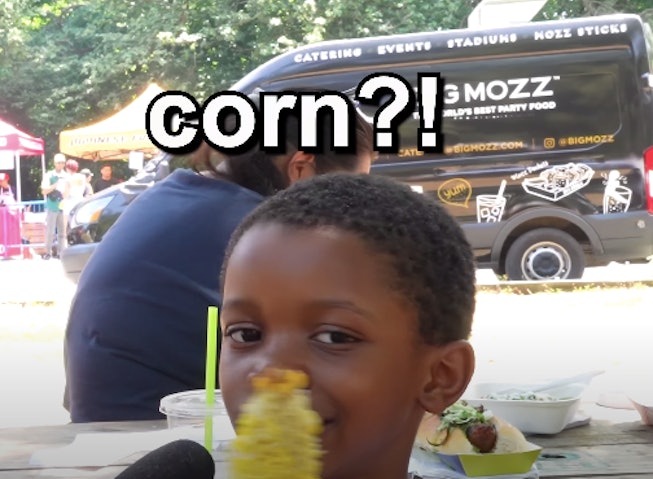 Whenever a soundbite goes viral, the internet finds a way to extend its shelf life with an even catchier song to match. This month, a little boy adorably explaining his love of corn became the latest internet sensation. The boy, whose name is Tariq, was featured on the web series Recess Therapy, in which comedian and actor Julian Shapiro-Barnum interviews children in New York City playgrounds. (The series launched in 2021, and the Instagram account already has 2.2 million followers).

Tariq — now known as the “Corn Kid” — shared his delightful commentary on the joys of corn during his interview, and the video of the exchange quickly went viral. Now, the little boy is being referenced by any brand that can find a way into the corn discourse (he’s already been featured in a Chipotle ad), and Tariq is doing videos on Cameo, which has raised eyebrows over the ethics of a child appearing on the platform. “Not them making money off the kid,” one person commented on the custom video service’s TikTok announcement of the addition of the new star. Another asked why there was a need to “capitalize” on his joy at all. Tariq and his family, who presumably set up the account, are being labeled by some commenters as “sellouts.” While the ethics of a child making Cameos might be murky, if it’s wrong for Tariq to profit from going viral, should anyone?

Internet creators The Gregory Brothers, for instance, have already remixed the original video, turning the soundbite into a song for millions of views called “It’s Corn.” The group (of all white creators) originally became famous for their “Songify The News” bits on their Schmoyoho YouTube account, which has since expanded to a bigger audience on TikTok and other platforms, turning viral soundbites from news clips into autotuned songs. One of the most notorious examples is the “Bed Intruder Song,” which entered the Billboard Hot 100 after receiving upward of 140 million views on YouTube in 2010. The song turned a viral clip of the then-unknown Antoine Dodson’s account of a real home invasion into a mainstream phenomenon, and helped launch the channel’s success.

The “It’s Corn” song has also quickly gone viral, furthering Tariq’s internet fame. As is standard with any trending sound, TikTok users were quick to use the audio to share their obsession with corn, along with their pets, their cult favorite products, and even their own merch based on the song. Brands have jumped on the trend on Twitter, and while just about everyone online has been allowed to commodify Tariq’s words, it seems it’s only when he and his family tried to profit from the moment too that criticism arose. But in a world where Black people regularly go viral and (and forgotten just as quickly), it might be imperative to seize the moment while they can.

On Monday, August 21st, the Recess Therapy Twitter account announced that the “It’s Corn” song’s proceeds would be “split with Tariq and his family.” A video of the song was accompanied with the caption: “We’re so excited to announce that, in partnership with Tariq, his family and @schmoyoho — we’ve launched ‘It’s Corn,’ the official song of this crazy corntastic moment we all created together! All proceeds are being split with Tariq and his family. So, please support and give it a listen! It’s streaming everywhere.”

Tariq has been credited on Spotify as a writer on the song, and Andrew of The Gregory Brothers tells NYLON that in addition to splitting the IP with Tariq and Recess Therapy, they have been advising his family (and their representation) on how to register with either BMI (Broadcast Music, Inc.) or ASCAP (American Society of Composers, Authors, and Publishers). Andrew adds: “We are splitting the royalties with Tariq & Recess Therapy, just like we have been splitting the royalties with our other partners over the last 12 years.”

Tariq and “It’s Corn” are really a case study of a wider issue — pop culture’s relationship with Black people on the internet. When TikTok became a household name at the start of the pandemic, dances created by Black teenagers went viral and were quickly coopted by white creators, who went onto have massive, even mainstream careers themselves. In the wake of the protests over George Floyd’s murder, those who had capitalized off of Black creations quickly scrambled to give credit where it was due, but for many, it felt like too little, too late. As Black creators continue to receive far less than their white counterparts for their genius, let’s hope that Tariq benefits from this moment. Anything less would just be corny.

Update, September 16, 2022: This article has been updated to reflect a quote and additional information provided by Andrew Gregory of The Gregory Brothers about the nature of Tariq’s songwriting credits.