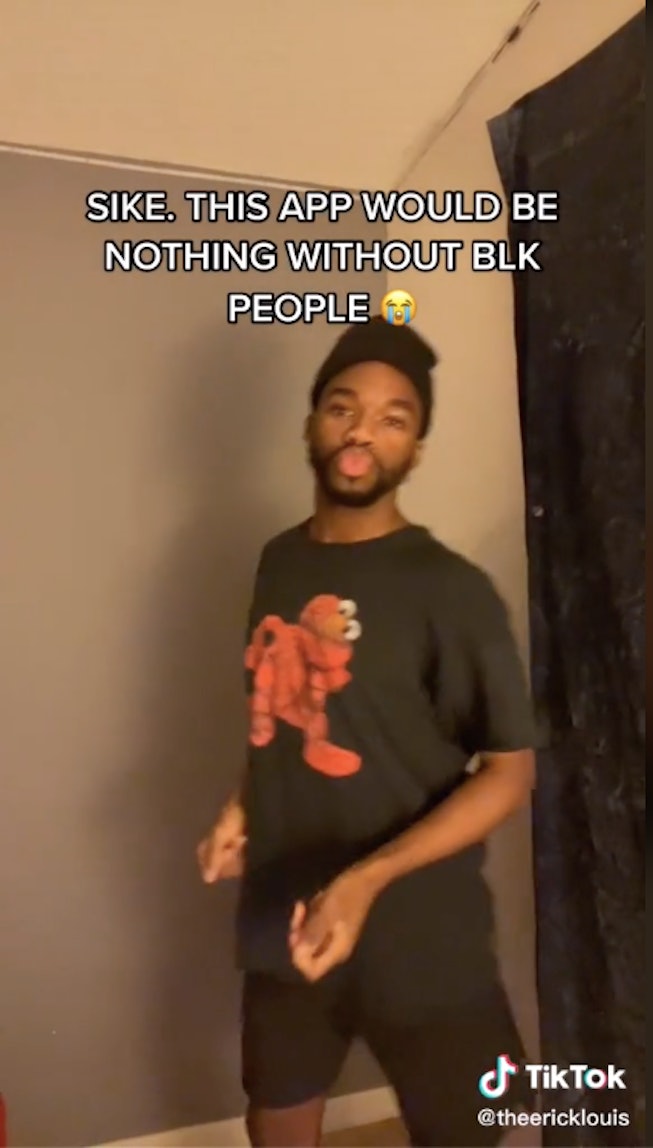 Over the weekend, many Black TikTok creators took a quiet vacation, deciding not to create a viral dance for Meg Thee Stallion’s latest hit, “Thot Shit.” This strike resulted in many feeble — albeit, funny — attempts at dancing to the song's catchy beat, and proved what Black people have been saying for far too long: TikTok would be nothing without us, and it's time to show some respect.

Truth be told, Black creators are hurt and exhausted. They set the trends, make the jokes, and choreograph the routines that everyone loves, but have little to show for it. Some may wonder why, but to Erick Louis, a fellow TikToker, the answer is simple: “anti-Blackness.”

It is both how and why we can drive culture without being included in it. Take a recent incident on The Tonight Show With Jimmy Fallon, for example. Addison Rae was asked to go on national television — receiving money and recognition — to perform dances that she did not create. And, to add insult to injury, the actual choreographers, who were all young POC, weren’t credited for their work until the show faced public scrutiny.

Though this drove a large conversation about the intersection of race and media, it ultimately didn’t change anything. White TikToker’s are still building platforms off the creativity of their Black counterparts. And in turn, as Louis explained to NYLON, Black creators have realized the power of their influence. So when “Thot Shit” dropped they, somewhat unanimously, decided not to participate.

“I think collectively Black folk were like, ‘you know what, we're just going to take a seat and see what white people can come up with,” he said.

The phenomena sparked a conversation on Twitter amongst TikTok creators and users alike. Challan, a popular TikToker, jokingly wrote, “Not Black TikTok on strike from making dances PLEASE LMFAOO.” The comments echoed her amusement. One person tweeted, “I’m all for it,” while another pointed out the irony of people struggling to come up with choreography, because the song includes instructions.

Louis used TikTok to join the conversation in his own way. He posted a video, which now has over 426k views, pretending to offer a dance to the public. The beginning shows him bouncing around to Megan’s verse — seemingly about to jump into choreography — before he stops and flips the camera off. Then a caption,“Sike. This app would be nothing without Black people,” appears before he walks off screen.

When asked what inspired the video, Louis said it was the consistent dismissal of Black creators. “I think as a collective we’re aware, as Black folk, that we’ve always been excluded and othered,” he said. “Now even in these spaces we manage to create for ourselves — whether it be music, fashion, language, etcetera — non Black folk violently infiltrate and occupy these spaces with no respect to the architects that build them.”

To his point, a few Black TikTokers eventually did make dances for the song. And like clockwork, others copied their choreography and reposted it without giving them credit. A recent Twitter thread shows the dance that @skaibeauty created, along with the copied version. According to the thread, the other TikToker deleted their comment section, which was likely filled with criticism. And now, they seem to have deleted the video all together.

When this happens, Black people are often told to relax, that it's “just a dance,” and that it's not a big deal. But the problem lies within that notion. If it’s just a dance, then why is it so hard to give credit where it's due? Why do people — specifically privileged white people — neglect to uplift the creators that facilitate their content?

Louis noted that it's simply easier to pretend like we’re not here, than it is to acknowledge our contributions. “No matter what we say, no matter what we do, no matter how we express our concerns, it's easier for people to willfully disregard and not pay attention, because in the end it's more beneficial for them,” he said.

And he’s right. Not paying attention to the wishes of Black people, making white people the face of trends they didn’t create, and refusing to credit the minds who did — intentionally or not — has built many careers at our expense. It’s anti-Black, it’s wrong, and it needs to stop.

NEXT UP
Culture
On The List (With Melissa Rich): How To Throw The Ultimate Apartment Party
Entertainment
Meet Andreas Metaxa, The Man Behind The Miami Jet-Setting Memes Of Supersnake
Beauty
Meet Naezrah, The Abstract Makeup Artist Behind SZA’s Coolest Looks
Entertainment
Meet Amy Allen, The Grammy-Nominated Songwriter Behind Pop's Most Honest Hits
Style + Culture, delivered straight to your inbox.