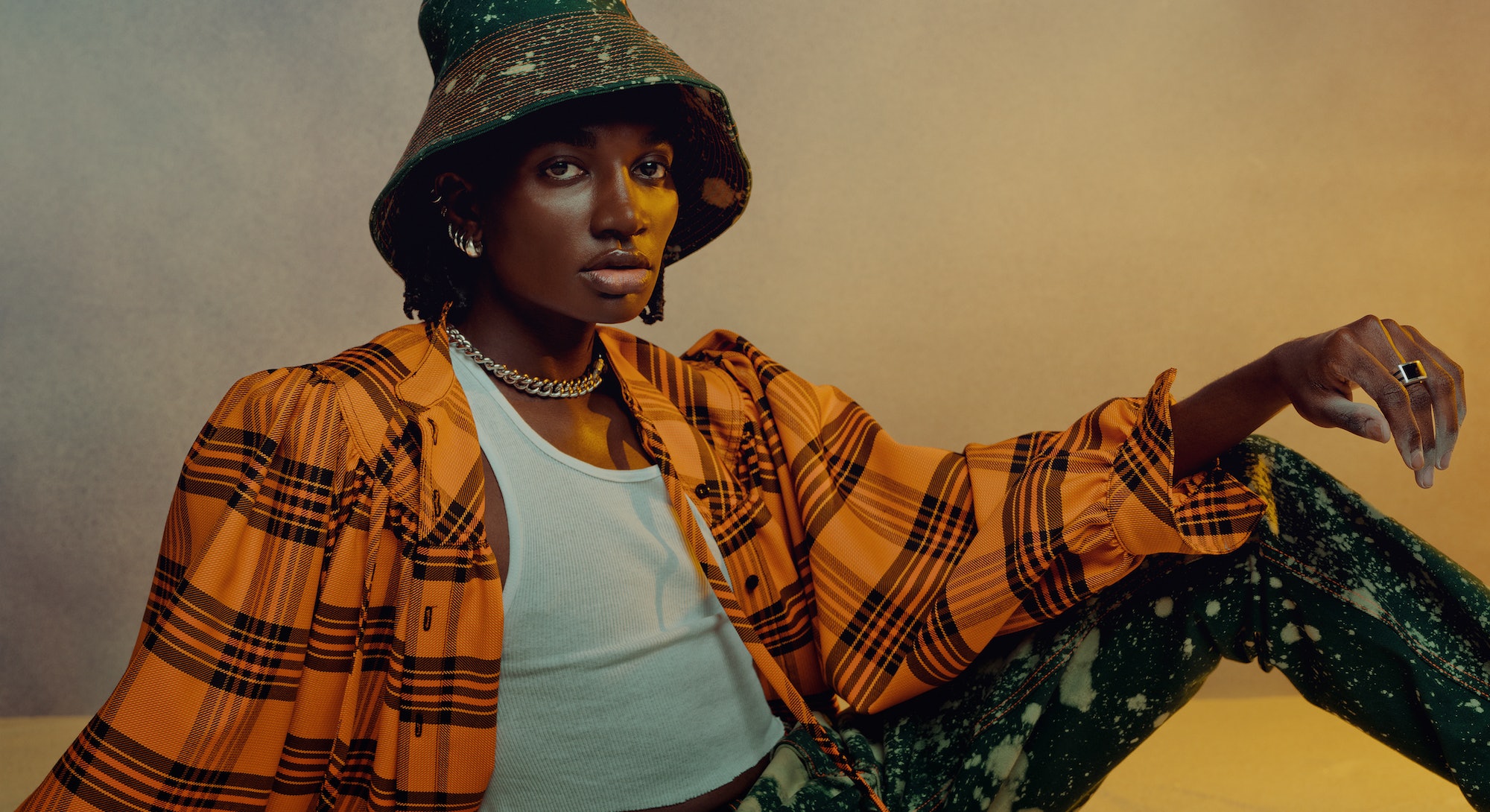 Above Rickey Thompson’s bed there is a painstakingly arranged collage of posters. The cover of Missy Elliott’s trailblazing 2001 album Miss E… So Addictive sits between the movie poster from John Singleton’s Oscar-nominated 1991 classic Boyz n the Hood and the ever-iconic picture of Destiny’s Child mimicking the Charlie’s Angels pose circa “Independent Women, Pt. 1.” Directly beneath those is a movie poster for the 1992 Tupac Shakur vehicle Juice, which slightly overlaps with one for the 1995 Emma tribute Clueless and a portrait of the Spice Girls in their prime.

It’s clear that the wall, which is completely covered from end to end, was a passion project for Thompson, a loving ode to all things ‘90s and early aughts. The social media influencer, actor, and model admits that he “hunted” each and every poster down himself, letting go of “a lot of money” in the process. But after turning 25 in February and feeling inspired to undertake a total apartment makeover — his attempt to open “a new chapter of my life,” as he describes it — the wall is also the only remnant of Y2K nostalgia left in his Los Angeles living space.

“When I turned 24, I was like, ‘OK, I still feel like a cute 21 or whatever,’” he says. “But now, since I’m 25, just five years until I’m 30, I’m like, oh wow.” So after years of living in an apartment that “looked like some set from a ‘90s teen movie,” Thompson decided that it was time for less adolescent indulgence and more Matisse art in the living room. The upgrade reflected in his personal styling choices, too. “I was dressing like a ‘90s pop star,” he says. “Then, I was like, ‘I’m 25 years old. I need to start giving grown and sexy, not preteen.’”

It’s late morning and Thompson, still in bed, is initially reluctant to turn his camera on, claiming that he looks “real rough” after recently waking up. But after spending two minutes sprucing up, he appears, his skin glowing in that much-coveted dewy aesthetic that has turned Glossier into a billion-dollar empire. “Well, I had the bonnet on,” he says when I make note of this. “You know I had to take the bonnet off.”

Thompson has spent the better part of the last decade amassing the kind of following most content creators could only dream about (5.5 million followers on Instagram, 2.6 million on TikTok, and close to 1 million on Twitter). But the origins of his fame lie in Vine, the now-defunct video platform where short-form content was king. An early adopter, Thompson made a name for himself with videos that were uproariously funny and strangely inspiring, using his trademark wit (and impressively athletic dance skills) to impart messages of unshakeable confidence, often while sending up a stiff middle finger to any potential haters. (“Mirror mirror, on the wall, who’s the baddest of them all?” he asks in a memorable clip. “Me, bitch!”) On the strength of his internet persona, he’s managed to branch out into several different arenas — he nabbed a lead role in the YouTube Premium series Foursome, narrated several interludes on a mixtape for rapper Aminé, and is currently fronting fashion campaigns as one of the faces for American luxury brand Coach.

Still, as he looks back on a quarter-century of life, he can’t help but feel like he’s destined for even more. “I feel like I’ve been this same person for the past seven years,” he says. “But I’m getting older and I feel like I’m getting more mature. I just want to be taken more seriously. I want to start doing things differently.”

Raised in Raleigh, North Carolina, Thompson describes his teenage self as shy. “I was not the most popular kid. I literally had not a lot of friends.” Luckily, he had the world of theater to keep him company; throughout high school, he appeared in a number of productions, from Mulan to Les Misérables, My Fair Lady to Little Shop of Horrors. “I just always found my voice in performing,” he says. “I felt like anytime I got on that stage, anytime I was acting out a scene, I could do anything. My nerves went away. I wasn’t scared to be myself.”

The version of Thompson we know — the relentlessly unapologetic, magnetic superstar — first revealed himself around the performer’s junior year, right around the time the Vine app was coming into vogue. Crawling to the internet as a means of escape from the bullying he was experiencing in the real world, Thompson began to make videos about his experiences. “I just randomly thought of ideas, like, What if I said this in the video? Maybe somebody will understand,” he recalls. “And every single time I made a video, people were like, ‘Oh my God. That is so me! I relate to that!’”

Soon, Thompson had millions of followers — and it didn’t take long for people at his high school to notice. “Everything switched for me,” he says. “People started realizing, ‘Oh! The shy kid is actually funny and amazing.’ I became the most popular kid in school. I won prom king. I literally went from being the underdog to being at the top.”

“I went through a lot of friend groups and knew a lot of people who weren’t on my side. They weren’t really rooting for me. They were talking mad mess behind my back and whatever.”

Thompson moved to Los Angeles shortly after graduating and, buoyed by his newfound confidence, did the exact opposite of what he did in his hometown: he sought out new friendships wherever he could find them. “I wanted to be in the center of everything. I just wanted to be friends with everyone,” he says. But just as quickly, he realized how dangerous this mindset could be. “I went through a lot of friend groups and knew a lot of people who weren’t on my side,” he continues. “They weren’t really rooting for me. They were talking mad mess behind my back and whatever.” Eventually, he came to the conclusion that, sometimes, smaller friend groups are better, and today he’s “finally found [his] core group of people.”

This includes Denzel Dion, a close collaborator who Thompson calls his best friend (the pair host Spotify’s We Said What We Said podcast together), and a boyfriend he has somehow managed to keep out of the public eye. “I feel that it’s just so good to have something private,” he says about the latter relationship. “You just want to mess around and have that to yourself.”

Thompson’s insistence on maintaining privacy around this facet of his life immediately distinguishes him from the younger microgeneration of content creators popping up in the post-Vine era. While the most-followed members of a place like Hype House are inclined to use their relationships to maintain audience attention, Thompson’s refusal to even offer a name for his partner — let alone post a picture of him to any of his social media platforms — is just one sign that he’s not exactly pursuing the same kind of fame.

Thompson’s Vine-honed, short-form comedy translated well enough to Instagram (less so to YouTube, where Thompson briefly tried his hand at fashion videos). But when it comes to TikTok, which is, for better or for worse, Vine’s true successor, he found himself a bit slower on the uptake. “At first, I was very nervous because I felt like I was too old to be on TikTok. I was like, ‘All these [users] are young children,’” Thompson tells me. “I remember when TikTok was Musical.ly. I hopped on that and I just saw all these comments, like, ‘Oh my God! You said bitch! You said ass! This is too inappropriate!’” He ultimately found his footing, primarily through the same kinds of content — rants, dances, motivational speeches — that made him such a hit on Vine.

But it wasn’t quite the same. With his massive cross-platform following, there’s no denying that Thompson is one of the most visible creators on the internet right now. However, as a gay Black man in the modern-day “influencer” media landscape, he exists in a league of his own, poking through a translucent bubble already crowded with mostly heterosexual white people.

It’s something we both can’t help but compare to Vine: during its prime, the most prominent Vine creators were often Black and, as a quick Google search will remind you, were recognized and celebrated as such. In the era of TikTok, however, creators of color are frequently finding their contributions erased and usurped by their white counterparts; look no further than Jimmy Fallon’s recent invitation of a white TikTok influencer onto his show to teach him several viral dances originally choreographed by people of color. (After complaints, the talk show host invited the original creators on as well.)

“I feel like, back in the day, Black people were just being funny and that was highlighted way more,” Thompson theorizes. “But now, it’s so hard. Now, I feel like, for you to be popping, you have to be white, cute, and straight.” It doesn’t help that he now sees lifestyle and beauty content largely overshadowing comedy on the algorithm — a shift he doesn’t hesitate to say he “hates.” “I think that's what the new generation wants to see. Our generation, we just wanted to laugh, have a good time. Now it's like, oh, who's going to be the prettiest, who's going to be the richest, oh my God.”

Of course, Thompson’s ability to pierce through that bubble is only further proof of his singular charisma, which he has honed into an instantly recognizable brand, one many would find hard to replicate without plainly coming off as a plagiarist. Still, Thompson is imagining a world for himself beyond the confines of social apps, anyway. He points to the “comedy genius” Regina Hall as a lifelong inspiration, citing his own desire to one day be part of a long-running franchise like Scary Movie. “I want to master that — how you go to the movies and you just die laughing when you see me. That's what I really want to be.”

It’s partially why the role of Dakota on Foursome, the YouTube scripted series that ran for four seasons, meant so much to him. Even though he bombed his first audition — “It was rough,” he says, “It was sooooo bad” — he got the part by being himself. As he recalls, he was the “only Black boy” in the audition room, but ultimately beat out “all the blonde, white boys” for the part of, as the pilot put it, “the gayest straight-shooter.” He cherished the opportunity to play a character that gave voice to gay Black boys like himself, and wants to secure similar roles in the future. Not that he would turn down a juicy straight part if offered one, but as he says, “When I’m playing somebody gay, I’m just so comfortable.”

And why shouldn’t there be a Rickey Thompson-esque character in the next ‘90s reboot or moody teen drama? After all, the fashion world came around. He finds it funny to look back on his early days in LA, when a modeling casting agent once told him that he was “too funny, too comedy” to ever get true work in the cutthroat world of high fashion. “Well, look at me now!” the Coach model says. “I’m over here, gracing the covers of magazines!”

Towards the end of our call, I ask Thompson what he, in all his present-day glory, would say to the shy little teenager that was simply honored to get a part in his school’s production of My Fair Lady. “I would tell him to just literally never, ever, ever give up,” he responds. “I would say, ‘Hey. I know life right now is not the best. I know it’s a struggle. But you’re going to be it. You’re going to be successful. People are going to love you. You’re going to have your haters and whatever, but you got this. You’re going to be a star.”