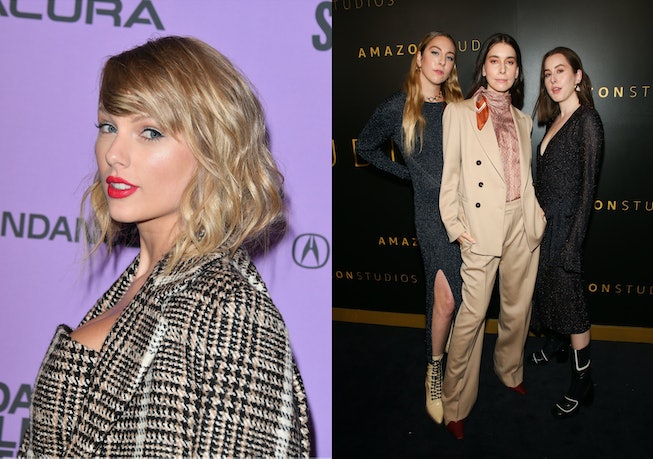 The girls are back. Just days after sleuthing fans discovered a new "Gasoline" remix featuring Taylor Swift registered to the ASCAP, Haim and Swift unleashed the full version on Wednesday, off the Grammy-nominated trio's expanded edition of their album Women In Music Pt. III. The song joins a Thundercat remix of "3 AM" as the two new additions to the album's expanded version, out now.

Appropriately, the "Gasoline" remix boasts no super unnecessary or fancy sonic additions; instead, it just has Swift exuberantly taking over its second verse, wailing with equal amounts of verve as Danielle Haim; Swift also adds some subtle ad-libs to the bridge by way of whisper-chanting: "Strike a match, strike a match, watch it blow."

Prior to the collab, Swift and Haim first linked up on the ex boyfriend-killing tune "no body, no crime" from the "Love Story" singer's latest record evermore. In a Beats 1 interview about the project, Swift described her friendship with the sister trio as one in which she could "play [music] with these people forever."

"The HAIM girls are my best friends, and we have... It's weird," Swift said. "We always end up at parties where there's a stage and people are like, 'Go play something. Play something.' And so we've played live together so many times, we've been on tour together, but this is actually the first album where Este, Alana, Danielle, and I, have actually collaborated on a song."

Women In Music Pt. III is nominated for Album Of The Year at the 2021 Grammys, while their song "The Steps" is up for Best Rock Performance. These are the first Grammy nominations for Haim since they were up for Best New Artist in 2015. They are also making history as the first all-female rock group to be nominated for Album Of The Year. Hear the "Gasoline" remix below.