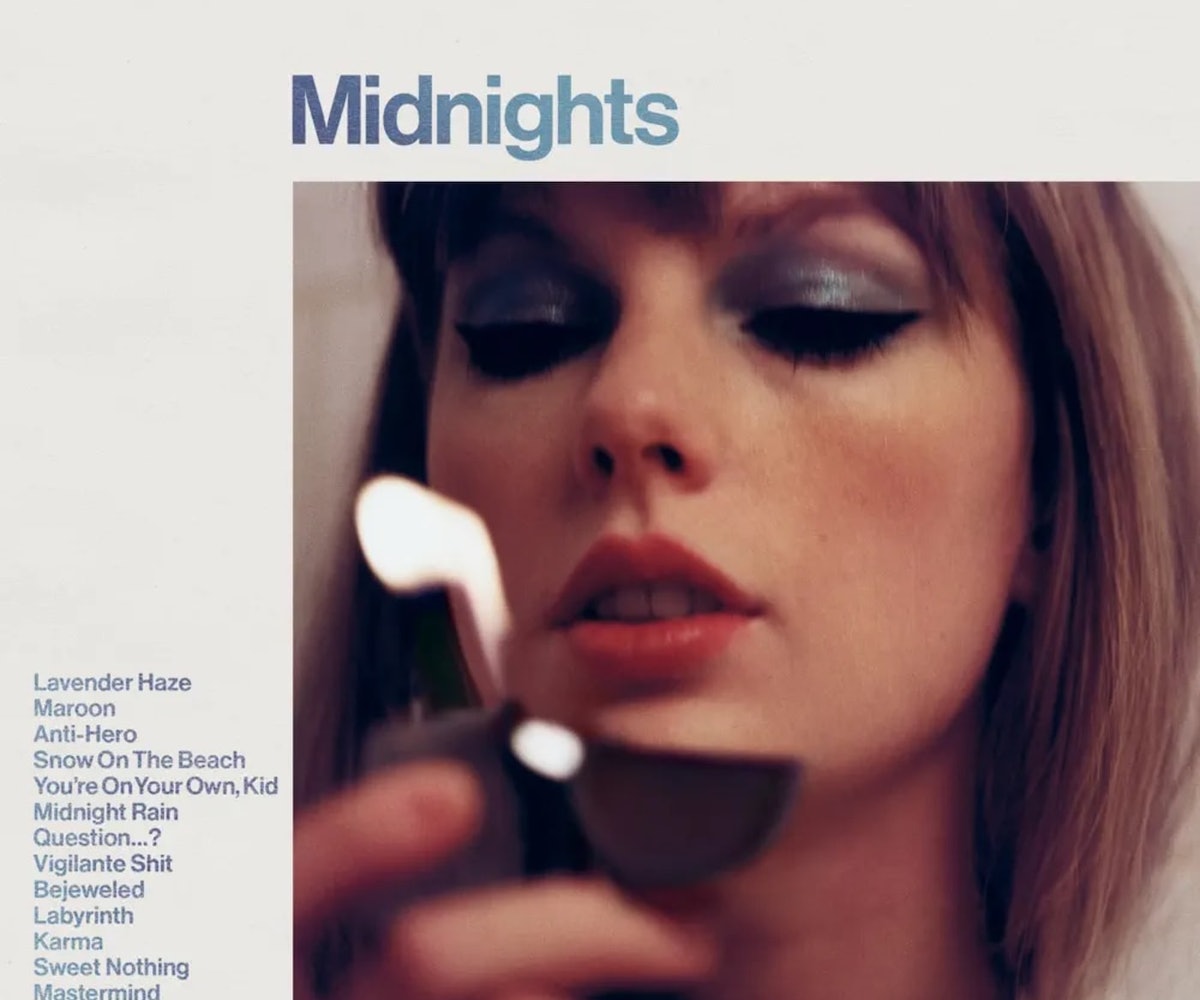 Taylor Swift’s tenth studio album, Midnights, has arrived. Per the pop star’s previously released note, the 13-track project journeys through the terrors, nightmares, and sweet dreams that plague her during the twilight hours. It’s not often that a Taylor Swift album release arrives with such a succinct thesis and forthcoming pre-release cycle as with this one. In the weeks leading up to Midnights, Swift excitedly revealed song titles, explainers, and lyrics from the album — a first for her — which seemed to convey there’s something different with this record. Indeed, in many ways, Midnights contains some of her most open, adventurous songs to date.

Across the project, Swift plays with mood, production, and delivery to craft a subtle album that reflects growth in many aspects for the singer. Following the release of Folklore and Evermore, highly regarded as the songwriter’s most mature efforts to date, Midnights taps into the writerly voice of those past two records and merges it with her signature pop sound. That being said, there are no big bangers on Midnights; its songs are softly pulsating anthems that brilliantly highlight the complex interior emotions that play out across them. On some, we hear Swift as we’ve never heard her before. “Anti-Hero” finds the singer genuinely fretting, this time without cheek or jest, that maybe she really is her own worst enemy. On opener “Lavender Haze,” Swift complicates her own previous ideas about marriage and being a bride. Deluxe bonus track “Could’ve Would’ve Should’ve” reassesses her past high-profile relationships with a more mature perspective.

Decades into her career, Swift is still turning over sides of her that we haven’t seen, putting herself under a microscope to nuance an image of her that she refuses to keep static. Below, we rounded up the best and most essential songs from Midnights and its deluxe version, Midnights (3am Edition), which show the pop star at her songwriting and song-crafting best.

Midnights flings open the door to Swift’s moody nocturnal world with opening track “Lavender Haze.” Like an overture, the song sets the stage for the rest of the album — mid-tempo, emotional electro-pop filled with defiance, longing, and rumination on the past. Addressing her boyfriend of many years, Swift admires the way he handles the endless scrutiny she faces, while also touching on another theme repeated later on “Midnight Rain:” marriage. While Swift’s early catalog featured epic fairytale weddings (“Love Story” literally ended with Swift-as-Juliette getting married in a white dress), “Lavender Haze” immediately sets the record straight that the singer now lives outside the restrictive binary of “one night or a bride.” The phrase itself comes from an episode of 1950s-set Mad Men, which she then defies with the lines “No deal/This 1950s shit they want from me.” Notably, the writing credits include Zoë Kravitz and Kendrick Lamar collaborator Sounwave. —Claire Valentine, Entertainment Editor

It’s not often, or ever, that Taylor Swift writes a song that feels genuinely ominous. “Maroon,” Midnights’ second track, written in ode to a red-hot relationship from her past, gets a nervy, disquieting edge from a droning synth hovering over its pop melody like a storm cloud. As Swift (ostensibly) fondly remembers flickers of their time together — “When you splashed your wine into me/ And how the blood rushed into my cheeks/ So scarlet, it was maroon,” she exhales — a foreboding sense of dread lingers in its undercurrent. It’s a marker that the “Red” singer has finally grown up, and that the red of her youth has finally crusted over into something darker. — Steffanee Wang, Associate Music Editor

Who among us hasn’t spiraled into a pit of self-loathing after spending too much time alone with our own thoughts? But when it comes to sharing our deepest, darkest inner secrets, those conversations are usually saved for our closest friends or our therapists — not millions of (possibly very judgmental) strangers around the world. Anxiety, paranoia, trust issues, body image, unhealthy coping mechanisms — you name it, Swift touches on it in Midnights’ lead single, “Anti-Hero.” It’s a brave, relatable bop infused with just the right amount of humor in its music video to balance out the intensely personal subject matter. Self-reflection is difficult enough in private, but Swift’s willingness to do it in such a public manner further proves why legions of fans turn to her songwriting to feel seen and understood. Taylor Swift, she’s just like us! —Alyssa Vingan, Editor-In-Chief

It’s only right that the first song Taylor Swift and Lana Del Rey decide to do together is utterly ethereal. “Snow On The Beach,” as its chorus states, is weird but f*cking beautiful — I’d argue the quiet standout of the album. Lightly Christmas-sy and psychedelic, there is something mesmerizing in how the song falls like ice hitting the fingertips. Fans initially complained about Lana not having a large enough part on the song, but I’d argue that her feature is perfect: she blows in and disappears like an icy, otherworldly gale. The song is all about the wonder in those once-in-a-lifetime happenings, like falling in love, or a freak but beautiful weather event. Let’s hope the Swift and Del Rey collaboration won’t be one of them. —SW

The sad, synth-heavy “Midnight Rain” finds Swift reflecting back on a love she left behind in favor of her own future. “He wanted it comfortable, I wanted that pain/He wanted a bride, I was making my own name,” the chorus intones with distorted, pitched down vocals. In some ways, it’s another callback to her earlier songs, as she reflects on the towns full of “pageant queens and big pretenders” she sang about on country albums like Fearless, and refers to the subject of the song as “my boy.” Now grown up, Swift is peering back in time at the “life [she] gave away,” and at the person she “never thinks of, except on midnights like this.” —CV

Swift is a master at the slow build, and she executes a brilliant one on “Question…?,” a song that gently erupts in its own chaos. What starts off as an innocent interrogation from a “good girl” to a “sad boy” quickly spins out of control as real intentions surface: “And what's that that I heard? That you're still with her?/ That's nice, I'm sure that's what's suitable and right,” Swift blurts on the bridge. When the drums finally kick in, the song veers into strange territory as Swift bends her vocals to very fun effect, Imogen Heap-style — and it certainly lives up to the drama and intrigue. —SW

On the opposite side of the “Anti-Hero” coin, “Bejeweled” is a self-love anthem in which Swift confidently takes her power back from someone (or someones) who either didn’t deserve it or took it for granted. She’s making sure to let her exes, her haters, anyone who’s listening, really, know that she’s hot shit and well aware of it. Swift doesn’t need anybody else to validate that, which is a personal growth milestone we should all aspire to. —AV

“Labyrinth” is a slow-burn ballad about the rush of falling in love quickly. “I thought the plane was going down/How’d you turn it right around?” she sings on one of the more hopeful and future-facing tracks on Midnights. Though she’s “lost in the labyrinth of my mind,” Swift’s lover wants to pull her out of her late-night dark thoughts and into a happier place, if only she can surrender to the feeling. —CV

For the most wholesome song on Midnights, look to “Sweet Nothing,” the record’s penultimate song written jointly by Swift and Joe Alwyn. The credits alone already make the lullaby-esque track extra special, but a listen to its lyrics highlight it as one of the most tender songs they’ve written about their relationship. It’s all built around the core realization that “All that you ever wanted from me was sweet nothing,” a quality that’s invaluable when dallying in the arena of celebrity love and dating. Haters and skeptics still doubt the merits of Swift and Alwyn’s relationship, but “Sweet Nothing” enters like a gentle salve to the chatter. They’ve found sanctuaries in one another, and you hear it clearest here. —SW

No Taylor Swift album is complete without a breakup bop, and on Midnights (3am Edition), boy did she deliver. Like the album as a whole, "Would’ve, Could’ve, Should’ve" is a deep dive on Swift's psyche as a whole, rather than the immediacy of a fleeting feeling which she's done so expertly in the past (see: "Enchanted"). With the help of Aaron Dessner, she ruminates on a long lost relationship that still haunts her; it may not be the most appealing truth, but sometimes a breakup lingers long past its expiration date. Here, Swift comes to terms that though she knows better now, you can't change the past and its effect on the present. — Lauren McCarthy, Executive Editor

Taylor Swift’s ‘Midnights’ is out now.