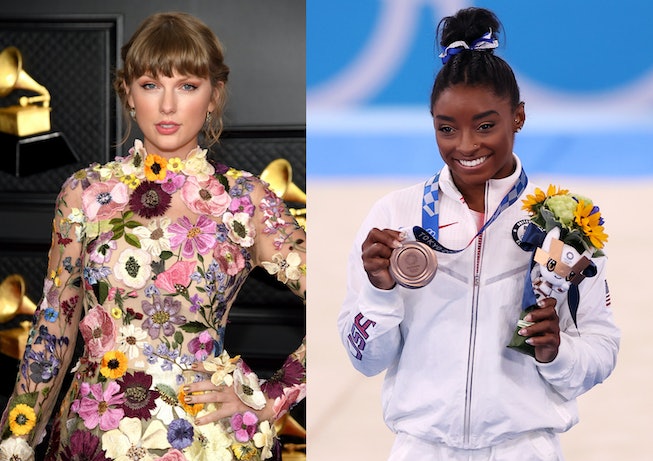 Taylor Swift created a touching tribute for Simone Biles, ahead of her final event at the 2021 Tokyo Olympics. The elite gymnast qualified for every competition but withdrew from a majority of them last week, taking a monumental step-back for both her mental health and physical safety.

Biles explained that she had the “the twisties,” which blocks gymnasts from feeling connected to their bodies in the air. Without that spatial awareness, their mesmerizing stunts can lead to a critical injury. Despite taking the necessary precautions to preserve her well being, Biles endured a lot of public scrutiny for her decision.

In an interview with NBC, Biles said that she needed medical clearance to compete, and was waiting for the green light to do so. But after stumbling through practice rounds, it didn’t seem likely.

Before withdrawing from her final event, Biles worked with her coach to simplify her beam routine. “I asked Cecile if we could try a downgraded dismount that I probably haven’t done since I was 12 or 13,” she said. The idea worked and she was able to compete last night, despite burgeoning critiques that she’s not as talented as she used to be.

Swift, who’s also dealt with public scrutiny, narrated a tribute ahead of Biles' performance. The video, set to Folklore’s “This Is Me Trying,” opened with a pressing question. “What do we want from our heroes?

The singer asks, “What do we expect of them? What do we need from them? What happens when they surprise us?” over footage of Biles’ vault routine.

“When you have the attention of the world, everything you do takes on a bigger meaning. It can be a heavy burden,” Swift says in the video.

“Throughout the last week her voice has been as significant as her talents,” she concludes. “Her honesty as beautiful as the perfection that had long been her signature.”

Biles saw the video and tweeted, “I’m crying how special.” Swift then responded, “I cried watching YOU. I feel so lucky to have gotten to watch you all these years, but this week was a lesson in emotional intelligence and resilience. We all learned from you. Thank you.”

Biles placed third on the beam, winning a bronze medal for the US team. But she remains one of the most decorated gymnasts of all time, earning a total of 32 Olympic Medals throughout her career.