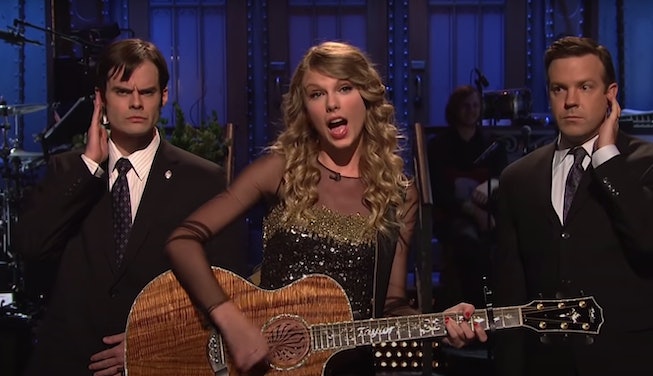 Much of the world may be preparing for the holidays, but we still have another season to get through — and that’s the Taylor Swift Red rerelease album rollout. To kick things off, Saturday Night Live announced that Swift will be returning as the show’s musical guest on November 13, a day after the album drops.

It’ll be Swift’s fifth time performing on SNL. The first was in 2009, when she was playing hits off her sophomore album Fearless, and the most recent was in October 2019 when Swift performed songs from Lover (and Phoebe Waller-Bridge hosted). If we’re lucky, we’ll catch Swift in another “Californians” sketch.

This time, Jonathan Majors will be hosting the evening. He’s known for roles like Spike Lee’s Da 5 Bloods, A24’s The Last Black Man In San Francisco, and HBO’s Lovecraft Country. He’ll also play villain Kang the Conqueror in the MCU, after making his Disney debut in Loki.

SNL also announced two other dates on the calendar — Succession star Kieran Culkin will host this Saturday, November 6 with musical guest Ed Sheeran, and Shang Chi and Kim’s Convenience star Simu Liu will make his hosting debut on the 20th, with Saweetie performing.