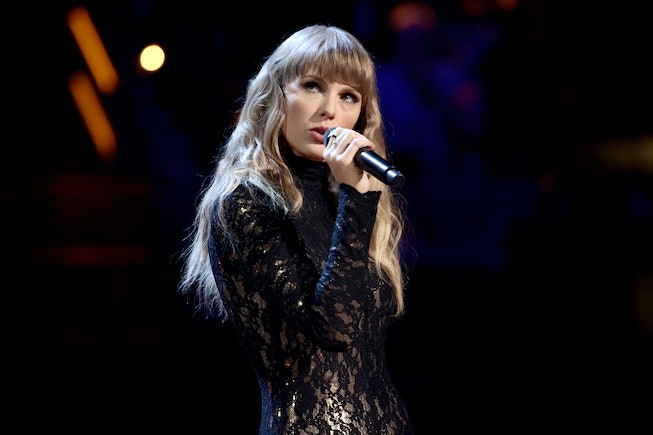 Another Taylor Swift album cycle is well underway, which means by now there’s already one song that’s taking over headlines. Just hours after the singer unleashed her tenth studio album and its accompanying deluxe edition, Midnights (3am Edition) at 3 a.m. on Friday, Oct. 21, that song has emerged as “Would’ve Could’ve Should’ve,” one of the seven bonus tracks added to the album’s expanded edition, and which appears to address one of Swift’s earliest relationships: her rumored 2010 romp with John Mayer. Produced by Aaron Dessner, “Would’ve Could’ve Should’ve” finds Swift expressing regret about the relationship, calling him a “ghost” from her past, while also opening up about the finer details during their time together, and skewering their age-gap.

Swift was only 19 when she was rumored to be dating Mayer, who was 32, in 2009. Though the two never publicly confirmed their relationship while they were together, they were invariably linked after Mayer appeared on stage with Swift a few times during her tour. Later when Swift released 2010’s Speak Now, she released the breakup track “Dear John” which more or less served as confirmation that they, indeed, were involved. On that song, she expresses concern for the age gap, writing explicitly, “Don't you think nineteen is too young?” a lyric that’s now infamous in her catalog. Now, coincidentally (or not) at the same age as Mayer when they started dating, Swift, 32, is revisiting their relationship again through more mature eyes.

And, lyrically, Swift isn’t holding back. The new song, which takes on a gruffer rock sound, makes “Dear John” sound like a lullaby, as she kicks off by getting right to the core of their power. “If you would've blinked, then I would've/ Looked away at the first glance/ If you tasted poison, you could've/ Spit me out at the first chance/ And if I was some paint, did it splatter/ On a promising grown man?/ And if I was a child, did it matter/ If you got to wash your hands?,” she sings.

The final four lines are particularly scathing as she comments on society’s tendency to disproportionately place the onus of a wide age-gap relationship on the woman. And, indeed, in the overall cultural memory of the Mayer-Swift affair, it does land as a bigger blip on Swift’s timeline than Mayer’s.

Throughout the rest of the song, Swift builds on why she regrets the relationship now, and how it still haunts her to this day. Relying heavily on religious symbolism and terminology, she brings up her age at the time, 19, seemingly confirming that she is talking about Mayer. “Ooh, all I used to do was pray/ Would've, could've, should've/ If you'd never looked my way,” she sings on the pre-chorus and chorus. “I would've stayed on my knees/ And I damn sure never would've danced with the devil/ At nineteen/ And the God's honest truth is that the pain was heaven/ And now that I'm grown, I'm scared of ghosts/ Memories feel like weapons/ And now that I know, I wish you'd left me wondering.”

On “Dear John,” Swift admits that their relationship was wrong, but on the bridge of “Would’ve Could’ve Should’ve,” she now explicitly states she regrets their time together. “God rest my soul/ I miss who I used to be/ The tomb won't close/ Stained glass windows in my mind/ I regret you all the time/ I can't let this go/ I fight with you in my sleep/ The wound won't close/ I keep on waiting for a sign/ I regret you all the time.”

This being Taylor, there’s a certain degree of artistic license you have to assume she’s taking as a songwriter when she talks about these extremely personal and high-profile events — but the lyrics here are bleak, especially as she follows it up with the heavy third verse: “If clarity's in death, then why won't this die?/ Years of tearing down our banners, you and I/ Living for the thrill of hitting you where it hurts/ Give me back my girlhood, it was mine first.”

With “Would’ve Could’ve Should’ve,” Swift follows a string of women pop stars who are speaking out about exploitative age-gaps in their music. Billie Eilish’s “Your Power” from her sophomore record, Happier Than Ever, is about “many different situations that we’ve all either witnessed or experienced. i hope this can inspire change. try not to abuse your power,” she said of the song. While Demi Lovato’s “29,” skewered the age-gap between her and her ex Wilder Valderrama. The song, too, was incidentally written while she was Wilderrama’s age when they were dating.

Swift’s fans are already warning John Mayer of the incoming apocalypse headed for his social media pages (a la Jake Gyllenhaal after “All Too Well (10 Minute Version)” dropped) in the wake of “Would’ve Could’ve Should’ve.” See more of the discussion online, below.