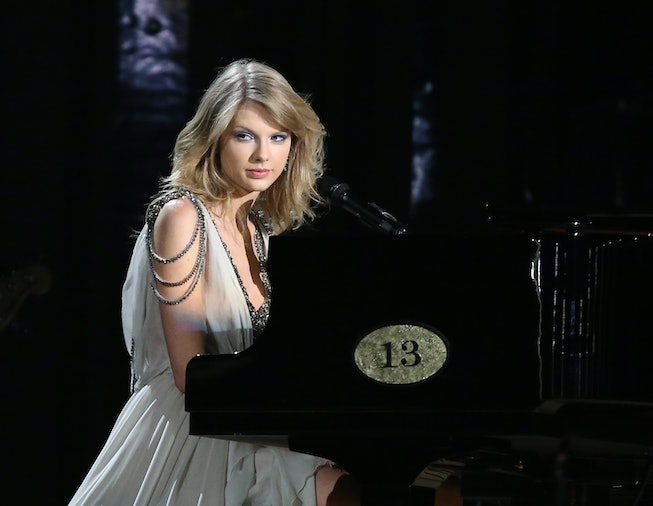 Taylor Swift's biggest songs — the chart-topping, record-breaking, radio-playing hits — have always been her most colossal: "Shake It Off," "Love Story," "Blank Space," "You Belong With Me." But Taylor Swift's best songs — the ones that fans obsess over and analyze for years and years — are her most intimate. On songs like "All Too Well" or "Out Of the Woods" or "Cornelia Street," the singer paints a moment in time with hyper-specific imagery that listeners can cling on to: a forgotten scarf, or a clandestine winter accident; the city whizzing by from the backseat window, drunk on a summer night. With her new album, folklore, which dropped quietly at midnight on Friday, the Bon Iver-featuring track "Exile" joins those ranks.

In her earlier days, Swift had a tradition of leaving "secret messages" in the liner notes of her lyric books; random letters would be capitalized to spell out a phrase that gave hints about the meaning behind what (or who) that particular song is about. "Back To December" called out TAY, a nod to song recipient Taylor Lautner; "Last Kiss" spells our FOREVER AND ALWAYS, indicating it's a sequel to the Joe Jonas-centric "Forever and Always;" and so on. Swift left that particular tradition behind with 2017's Reputation, and three years later with folklore, she abandons the notion of littering the internet with Easter eggs of song titles and music videos to come altogether. After last year's Lover press cycle, which was all but predicated on dropping cryptic hints about the album for months leading up to its actual release, Swift dropped folklore with nary a single clue, giving the world less than 24 hours notice of its arrival.

Part of the fun of Swift has been in getting into these complicated goose chases to find secret meanings in the lyrics that can provide some insight into the singer's now very private personal life. But on folklore, the 30-year-old proves that she doesn't need that particular trick anymore; these songs stand alone and shine without any gimmicks. And what's crazier: this time around, there may not even be a proverbial goose to chase. To coincide with the midnight release, Swift shared a letter to fans saying that folklore is not so much about her own life, but rather "characters" she's made up during isolation. "I found myself not only writing my own stories, but also writing about or from the perspective of people i've never met, people I've known, or those I wish hadn't," she writes.

They say you should write what you know, and Swift has done that to the max for the past decade. What makes her songs so special are those personal flourishes, the hyper-specific memories and details that she peppers her songs with. If you remove those autobiographical elements, does a Taylor Swift song lose its spark? As it turns out, absolutely not. At her best, Swift lyrics can feel like a true gut-punch, the type of words that hold such meaning that you don't know if you want to scream them from rooftops or whisper into your pillow. folklore is filled with those gut-punches, and no more so than on its fourth track, "Exile." A sort-of of spiritual sister to Red's "The Last Time," the song is a back and forth exchange between Swift and a former love, this time swapping out Snow Patrol's Gary Lightbody for Bon Iver's Justin Vernon. The latter's deep baritone opens the song, a momentarily jarring surprise for someone expecting Swift's sweet lilt, before enveloping the listener like honey: "I can see you standing, honey/With his arms around your body/Laughin', but the joke's not funny at all."

The song unfolds as a dialogue between two lovers; one begging still, one resigned and ready to move on. There is no blame here, just two different perspectives given light to shine — in fact, on the almost five-minute-long track, Swift doesn't appear until nearly one minute and thirty seconds in. The focus here, like with the rest of the album, isn't about her — it's about telling the best story possible. Swift has always been the protagonist in her music, but on "Exile," she and Vernon share equal parts of the dissolution of a relationship. "I'm not your problem anymore/ So who am I offending now?" she sings; "I never learned to read your mind," he later counters. There's no clear hero to root for here, no band geek on the bleachers to rise up against the cheerleader. Just like with any good folklore, you just have to sit back and let the story unfold as it is. This is the triumph of folklore, the album, as well. Even when removing herself from the equation, Swift can still tell a compelling story that still feels as intimate as any personal secret.