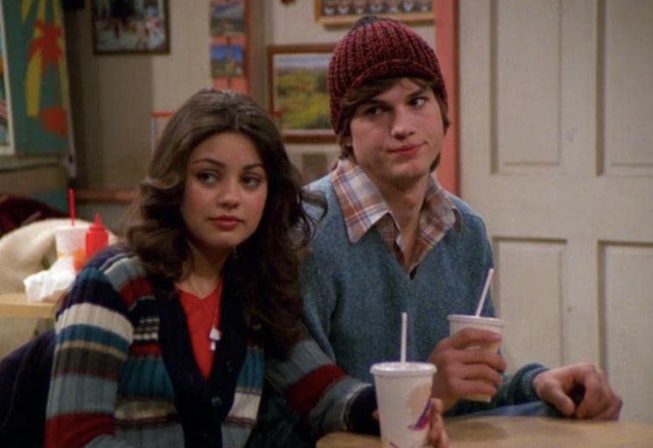 Right now, the only place to stream That ‘70s Show is on Amazon Prime — and since it’s not part of Prime Video’s in-home library, it doesn’t come cheap either. But soon, fans of the hit Fox sitcom about high schoolers navigating life while smoking lots of weed in the 1970s will be able to check in with their favorite Wisconsin residents on the familiar streaming home of Netflix. Except this time, it won’t be during the loopy era of Nixon, Ford, and Carter at all. Instead, everyone will be heading into the Bush-Clinton years for a new spinoff, fittingly called… That ‘90s Show.

According to Variety, That ‘90s Show will bring back most of the core cast of the original series. Mila Kunis, who went on to create funny hits like Forgetting Sarah Marshall and Friends With Benefits alongside Oscar-winning prestige fare like Black Swan, will return for the next iteration of her breakthrough series, as will her longtime partner and husband of seven years Ashton Kutcher, who memorably went on to star in No Strings Attached, a movie whose premise was identical to Kunis’ Friends With Benefits and came out only several months before it.

Joining the happy couple will be Topher Grace, who played Eric Forman and now stars on ABC’s Home Economics (he also played the infamous KKK Grand Wizard David Duke in Spike Lee’s BlackKklansman); Laura Prepon, who played Donna Pinciotti and is now best known as Orange Is the New Black’s Alex Vause; and Wilmer Valderrama, who played Fez and has since stayed true to his network roots as a regular on NCIS. Kurtwood Smith and Debra Jo Rupp, who played central parental figures Red and Kitty Forman, will also reprise their respective roles. The only main castmember not returning for the spinoff is the actor behind Steven Hyde, Danny Masterson, who will soon be in the middle of a very public trial, where he faces sexual assault allegations by multiple women.

A plot synopsis for the series reads: “It’s 1995 and Leia Forman, daughter of Eric and Donna, is visiting her grandparents for the summer, where she bonds with a new generation of Point Place kids under the watchful eye of Kitty and the stern glare of Red.” Leia will be played by The Lost Husband’s Callie Haverda, while her new friend group includes The Slap’s Ashley Aufderheide as Gwen, Colin in Black and White’s Mace Coronel as Jay, Good Kid’s Maxwell Acee Donovan as Nate, Barb and Star Go to Vista Del Mar’s Reyn Doi as Ozzie, and newcomer Samantha Morelos as Nikki.

While not much more is known about the series — most importantly: How much screen time will Mila Kunis and Ashton Kutcher get together? — we can feel comfortable knowing that That ‘90s Show has smartly brought back original series creators Bonnie Turner and Terry Turner, as well as the couple’s daughter Lindsey Turner, as writers and executive producers. With fellow That ‘70s Show alumni Gregg Mettler returning to the fold as writer and executive producer, too, it feels quite possible that this upcoming attempt to capitalize on a past hit might be more than just an immediate cash-grab. Or, maybe so. But there will at least be some familiar laughs too!