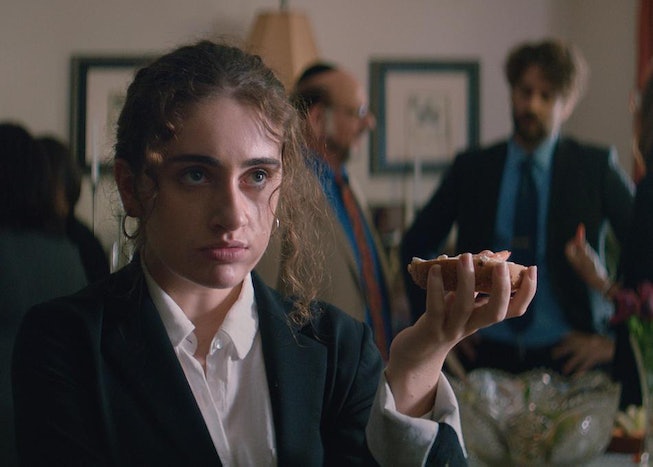 In response to the ongoing COVID-19 pandemic, the long-running Los Angeles-based LGBTQ+ film festival OutFest went virtual for the first time ever this year, providing access to people all around the world. Running from August 20th to August 30th (with an “Encore Week” that extended through Labor Day weekend), the festival played host to over 160 features, short films, documentaries, and television pilots — many of which were having their world premieres.

As I navigated the packed slate, which was easily accessible through the OutFest Now online app, I was treated to a sea of enjoyable content — from compelling documentaries and laugh-out-loud comedies to heartbreaking dramas and experimental arthouse flicks. I noticed trends (new filmmakers are content with having their characters just be queer, without that leading the plot itself; James Baldwin’s seminal novel Giovanni’s Room is still relevant, as proven by the three films that referenced it) and walked away desperate to see more from new faces (like comedian Rachel Sennott, a rare talent who stole the show in two different features). Overall, it was a success, and after consuming an unhealthy number of new films in a very short period of time, I’ve compiled a list of the ten best titles I saw, listed below in alphabetical order.

Breaking Fast is corny — let’s get that out of the way. The dialogue is often cheesy, the story is cloyingly direct, and the ending could be spotted from miles away. Yet, the longer I watched, the more I had trouble resisting these specific charms. The dialogue was cheesy, but in the cutest way. The story was direct and the ending was predictable, but not in a way that felt any different than your everyday romcom — and Breaking Fast at least centers on a queer couple. Following Mo (a perfectly-cast Haaz Sleiman), a gay Muslim virgin struggling to fit in in West Hollywood, as he gets to know Kal (an equally-engaging Michael Cassidy), a classically All-American aspiring actor, the film takes place over the course of Ramadan, as Mo tries to balance his burgeoning romantic feelings with his responsibilities to his faith. Cute and quirky, Breaking Fast never pretends to be some game-changing arthouse film. It’s perfectly comfortable treading familiar territory, with slight tweaks to the particulars. And for that, it stands out. We all need an easygoing romcom every now and then!

It would be easy to describe Cicada as a romance about an interracial relationship, but boiling the evocative directorial debut down to that one aspect feels severely limiting. Following Ben (co-director Matt Fifer), a newly-out bisexual white man with a penchant for no-strings-attached sex, and his growing attraction towards Sam (newcomer Sheldon D. Brown), a Black man who has stayed in the closet for the sake of his religious father, Cicada is more a story about trauma and the ways true love and open intimacy can help us process and overcome the unsavory experiences of our past. Though it is Ben’s story that propels the film, Fifer and co-director Kieran Mulcare do a surprisingly great job of balancing his perspective with Sam’s, effectively centering the Black view as much as his own. The chemistry between Fifer and Brown is at the core of Cicada’s charm, so it should come as no surprise that the pair teamed up to write the beautiful screenplay together.

Every film festival brings with it a documentary that feels vital. Enter Cured, a deep dive into the 1973 fight to have “homosexuality” taken off the American Psychiatric Association’s list of mental illnesses. From a 2020 lens (where homosexuality is at least acknowledged, if not exactly normalized), the footage, newspaper clippings, and firsthand accounts from LGBTQ+ people who came of age in the 1950s and 1960s is harrowing, showing what it was like to be criminalized (and sometimes institutionalized) for your sexual orientation. But it also forms a nice juxtaposition to the fight itself, which found queer people putting their careers on the line to take a stand for what’s right — people like Dr. John Freyer (aka Dr. Henry Anonymous), who put on a mask to speak to a group of people about what it was like to work as a gay psychiatrist. Featuring interviews with queer activists next to survivors of electroshock conversion therapy, the film is uplifting despite its subject material, showing how resilience and persistence has always been at the heart of the ongoing LGBTQ+ Rights Movement.

Unlike many gay men of my milieu, I actually enjoyed Love, Simon. Still, I completely understand why so many had gripes about the relevance of a “coming out” story in our modern climate. Which is why I entered Dramarama with tons of trepidation. Set in 1994 and following a group of high school senior theater geeks as they have a sleepover on their final night before heading off to college, the film centers on Gene (Nick Pugliese), who plans to come out to his friends. As the only one not leaving off to a prestigious institution (other friends are going to NYU and UCLA), Gene is already saddled by his feelings of inadequacy, but the fact that this particular group of friends are all devout Christians definitely doesn’t make his pursuit any easier. A warm period piece with wittily specific dialogue — these are theater geeks, so mentions of Stephen Sondheim and Patti Lupone abound — Dramarama somehow modernizes the coming out story despite its dated setting. The closing scene, in particular, in which one friend offers Gene some sage words of advice and support, brought me to tears.

Would it be cliché to say that one of the most visually arresting films I’ve seen all year is basically a softcore porno? Because that’s certainly how I feel about the neon-soaked world of Dry Wind (Vento Seco in its native Portuguese). Directed by Daniel Nolasco, whose Mr. Leather documentary was one of my favorite discoveries at last year’s NewFest, Dry Wind follows Sandro, a middle-aged man living in Brazil, working at a mill, and seeking out kinky sex wherever he can find it. Eventually, he starts a tryst with his younger coworker Ricardo, but when Ricardo indicates an interest in something more serious, Sandro pulls back. Ricardo then bounces over to the fresh-on-the-scene heartthrob Maico, pushing Sandro into a jealous rage that forces him to reconsider what he wants from a partner. Gorgeously shot with some of the most electrifying sex scenes I’ve ever witnessed, Dry Wind is a decadent fantasy that’s anything but chaste. If I had to describe the “queer gaze,” this film would be at the top of my list.

I’ve seen my fair share of fashion documentaries, and throughout, I’ve learned that there are two elements I always need: one, a unique take on an artist’s legacy, and two, beautiful clothes. Thankfully, House of Cardin delivers on both accounts. A retrospective of the French-Italian designer’s incredibly expansive line of clothes, furniture, houseware, cars, planes, and...dominoes, the Todd Hughes and P. David Ebersole-directed documentary looks beyond the products themselves to speak to Cardin’s lasting impact on the wider culture. Featuring interviews with everyone from Naomi Campbell and Dionne Warwick to Jean Paul Gaultier and Sharon Stone, House of Cardin examines Pierre Cardin’s role in shifting how we think about fashion — from the role he played in introducing “ready-to-wear” fashion to the masses to his then-controversial decision to cast models of color in his runway shows. House of Cardin shows exactly how Pierre Cardin was, as the long-running Vanity Fair columnist Amy Fine Collins put it, “a futurist” in all aspects of his work.

Henry Golding is a long way away from the big-budget charm he tapped into for Crazy Rich Asians and A Simple Favor in Monsoon. In Hong Khaou’s sophomore effort, the rising leading man plays Kit, a gay Briton who returns to Vietnam three decades after fleeing the Vietnam War to find somewhere to scatter his mom’s ashes. Though he was born in Vietnam, Kit returns to find himself feeling like a tourist, completely alienated from many aspects of a culture he should feel connected to. Luckily, there’s Lewis (Parker Sawyers), a Black man who’s adopted Vietnam as his own home after his dad fought in the war, to give Kit a sense of place and belonging. A deliberately quiet affair, much of Monsoon’s success is hinged on Golding’s ability to communicate a general feeling of displacement without saying anything, often just staring out at nothing in particular. I was pleased to find out that the relative newcomer was more than up to the task.

The Obituary of Tunde Johnson, directed by Ali LeRoi

The most topical film of OutFest was definitely The Obituary of Tunde Johnson, Ali LeRoi’s feature debut (based on a spellbinding script by a then 19-year-old Stanley Kalu) about a well-off Nigerian-American high schooler who comes out to his parents the same day he’s gunned down by racist police officers. But he doesn’t die — instead, he awakens back in his bed, forced to relive that day over and over again, until he finds a way to evade death. Stuck in a classic time-loop, Tunde subtly tweaks his daily routine, doing anything in his power to avoid his untimely demise. But no matter what he does, his fate seems inescapable — he’s shot by himself, shot with his boyfriend, choked out in front of a gas station. Blending the unfortunate reality of our current headlines with the sci-fi elements of a time-loop story and the recognizable beats of a classic high school teen flick, The Obituary of Tunde Johnson is revelatory, effectively capturing the unique pressures of being both Black and gay. It’s no surprise that it sticks out in my mind as one of the best films to emerge from the festival.

Coming in at a tie for my favorite OutFest discovery is Shiva Baby, Emma Seligman’s feature debut (based on her short of the same name) about Danielle, a soon-to-be college graduate who hides the fact that she’s supported by her well-off Jewish family from her sugar daddy, who believes she’s saving up for law school. That is, until her facade rapidly falls apart when she returns home for the funeral of a family friend, only to find out that said sugar daddy, Max (Danny Deferrari), is actually a former employee of her father’s and is now married with a child. As both parties try to keep their relationship hidden from everyone else, chaos naturally ensues, and the situation is only heightened by the presence of Danielle’s high school sweetheart, Maya (Booksmart’s Molly Gordon, perfect as always), who is also there vying for Danielle’s attention. Anchored by a remarkably layered performance from comedienne Rachel Sennott (in her first of two OutFest titles on this list), Shiva Baby often feels like a cringe comedy. But with Seligman’s directorial flourishes deftly establishing a general sense of unease and constantly-rising tension, it almost feels like a disservice to even refer to it as a “comedy.” This is art. (Art that deservedly won the Grand Jury Prize for Best Screenplay.)

Set over a period of hours, Tahara almost feels like it’s happening in real time. Directed by first-time feature director Olivia Peace, the film follows best friends Carrie and Hannah as they try to get through the funeral of Samantha, a girl from their Hebrew school who died by suicide. While taking a bathroom break, shy, reserved Carrie (a magnetic Madeline Grey DeFreece) and boy-obsessed Hannah (a perfectly-cast Rachel Sennott, in her second film on this list) share a kiss as Hannah tries to find out whether or not she’s good at it. The kiss, expectedly, awakens something in Carrie, who struggles to process her newly-discovered lesbian desire, while Hannah selfishly tries to rope Carrie into a menage a trois in the hopes of impressing her crush, Tristan. A snapshot of suburban Jewish life that effortlessly confronts adolescent self-centeredness, the briskly-paced Tahara is a coming-of-age story unlike any other.