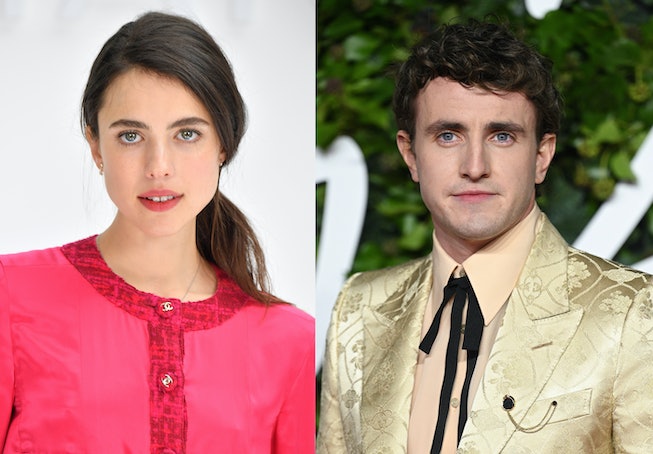 Hollywood starlet Margaret Qualley is set to executive produce and star in a new psychological thriller produced by Dakota Johnson. The film, The End of Getting Lost, tells the story of a newlywed couple entangled in a trippy mystery. Qualley will lead the film as Gina, and if the rumors are true, her co-star may be Normal People’s Paul Mescal. According to Deadline, Mescal is currently “in talks” to appear in the film.

Set in 1990s Europe, the film follows Gina and Duncan on their honeymoon. However, their perfect vacation takes a dark-turn when Gina’s involved in a baffling accident. Per the synopsis, “the story begins to toggle between past and present — and husband and wife — to uncover a portrait of love’s powers and dangers. As the two hop borders across Europe, their former lives threaten to catch up with them while the truth becomes more elusive.”

The End of Getting Lost is an adaptation of an upcoming novel of the same name, written by Robin Kirman. The book is set to be released on February 15th. In the meantime, the film is in early development.

Deniz Gamze Ergüven is set to direct the feature. Her past credits include the 2017 film Kings, starring Oscar-winner Halle Berry, and 2015’s Turkish film Mustang. Meanwhile Johnson is co-producing with her Ro Donnelly for their joint-company Tea Time Productions. They recently premiered two features at Sundance, and The End of Getting Lost is the latest addition to their slate.

Though Mescal’s involvement is not confirmed, it's not an unlikely move for the actor. Following his stint as the dreamy yet elusive Connell, on Hulu’s Normal People, he has been pursuing more edgy roles. Most recently he worked with Johnson on The Lost Daughter, which Maggie Gyllenhaal directed for Netflix. In it he played Johnson’s secret lover — a complex character that may have primed Mescal for his next, exciting, role.

The End of Getting Lost doesn’t have a release date yet, but when it premieres the film will be available to stream on Amazon.