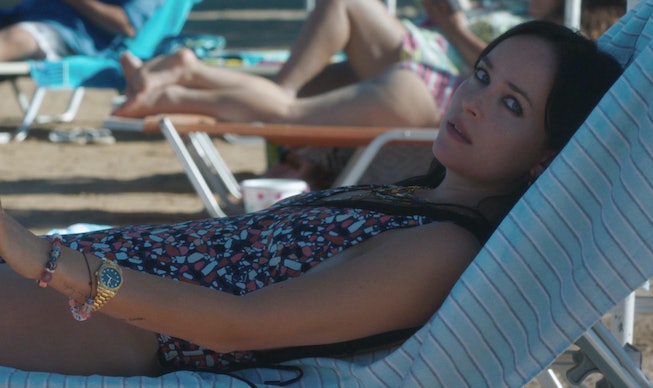 After years of doing criminally underrated work on-screen, Oscar and Emmy-nominated actress Maggie Gyllenhaal is taking a seat behind the camera for her directorial debut in The Lost Daughter. An adaptation of Elena Ferrante’s 2008 novel of the same name, the film was also written by Gyllenhaal.

After enjoying a nice festival run (that hasn’t ended just yet), The Lost Daughter received its first official trailer yesterday, offering eager viewers the first real peek into what we can expect from the upcoming film. Judging by it, we can look forward to beautiful beachside scenery, Dakota Johnson with jet black hair, and at least one creepy-looking doll having her head squeezed.

Keep reading to find out everything we know about The Lost Daughter so far.

The Lost Daughter is a psychological drama.

Based on Elena Ferrante’s novel, The Lost Daughter has been described as a “psychological drama,” which is just a fancy way of saying its tale of a 40-something mother of two escaping to a remote beach destination will be more Jennifer Lawrence in Mother! than Julia Roberts in Eat Pray Love.

Netflix’s official logline reads: “Alone on a seaside vacation, Leda becomes consumed with a young mother and daughter as she watches them on the beach. Unnerved by their compelling relationship, (and their raucous and menacing extended family), Leda is overwhelmed by her own memories of the terror, confusion, and intensity of early motherhood. An impulsive act shocks Leda into the strange and ominous world of her own mind, where she is forced to face the unconventional choices she made as a young mother and their consequences.”

The cast is filled with some exciting names.

After winning an Oscar and immediately being nominated for another, all eyes will be on Olivia Colman as Leda Caruso, the lead character in The Lost Daughter. But the rest of the cast is equally impressive. I’m Thinking of Ending Things’ Jessie Buckley plays the younger version of Leda and Normal People breakout Paul Mescal stars as Will, a seasonal worker at the beach house where Leda is staying.

Fifty Shades star Dakota Johnson plays the young mother, Nina, while Oliver Jackson-Cohen taps into some of the same menace he exhibited in Invisible Man and The Haunting of Bly Manor to play Nina’s domineering husband Toni. In the past, Garden State’s Peter Sarsgaard plays Professor Hardy, an older literature professor who takes an interest in Leda’s work, and in the present, Westworld’s Ed Harris plays Lyle, the on-site handyman who develops a flirtatious relationship with Leda. The cast is rounded out by Succession’s Dagmara Domińczyk as Callie, Nina’s wealthy and pregnant sister-in-law, and Poldark’s Jack Farthing as Joe.

As mentioned above, The Lost Daughter is a psychological drama that will no doubt be as suspenseful as it is emotionally fraught. This spirit is perfectly captured in the just-released trailer, which finds Gyllenhaal expertly using tight closeups to establish a general sense of creepy tension that’s only amplified by the chilling score. In the two-and-a-half minute clip, Colman also seems in typically top-notch form, tossing off suggestive glances in the direction of Johnson’s character at one moment and lifelessly falling over into a patch of sand in the next.

The film is already getting rave reviews.

Shortly after Netflix acquired international distribution rights for the film, The Lost Daughter had its world premiere at the Venice International Film Festival, where it would eventually earn Gyllenhaal the Golden Osella Award for Best Screenplay.

Critics have also been quite laudatory of the ambitious debut. Indiewire praised its sense of “tension” and “suspense,” while Little White Lies shouted out the “gutsy performances of Colman and Buckley.” Variety was impressed by Gyllenhaal’s “unfussy, practically invisible” directing style, which worked to “privilege the performances,” while The Hollywood Reporter didn’t hesitate to label the film a “must-see” that will “put Gyllenhaal on the map as a neophyte writer-director already graced with maturity and restraint.”

It currently has a 94% rating on Rotten Tomatoes and an 88 on Metacritic.

The Lost Daughter comes out in December.

Gyllenhaal’s debut is currently still running the festival circuit, poised to hit several more before debuting for the general public. But the rest of us won’t have to wait too long, as The Lost Daughter will hit select US theaters on December 17 before hitting Netflix on December 31.