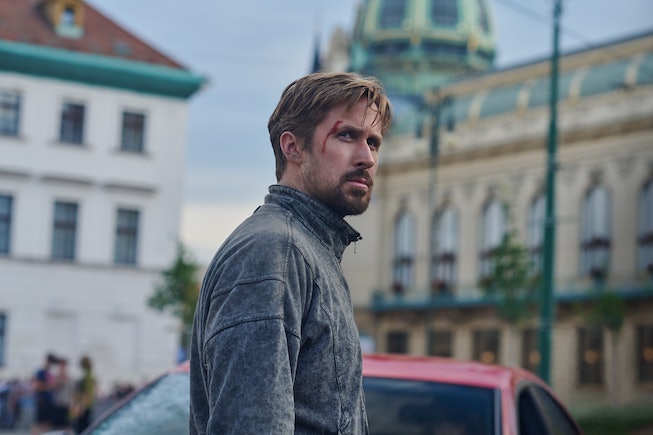 It’s been four years since Ryan Gosling last graced our screens in 2018’s First Man, but the actor is back — for Netflix’s most expensive movie, ever. The Gray Man, starring Gosling and Captain America’s Chris Evans as deadly CIA assassins who turn on each other, is the streaming platform’s bid for a massive blockbuster success, and they’ve pulled out all the stops in making the buzzy film into a full-action experience.

Joining Gosling and Evans are Ana de Armas, Regé-Jean Page, Billy Bob Thornton, Wagner Moura, Jessica Henwick, and Alfred Woodard. The film is based on Mark Greaney’s bestselling book series, and stars Gosling as CIA mercenary “Sierra Six.” Speaking about his character to IndieWire, Gosling said, “In almost every scene, we tried to set it up so that he was at a disadvantage. And it becomes about watching him use whatever is in his environment to gain leverage. And what he uses most consistently is a sense of humor. It’s a survival tool. If he can find what’s funny about the absurdity of the situation, he can distance himself from the danger of it.”

If all goes well, The Gray Man will launch a franchise with many more films to come. The Gray Man will hit theaters July 15, 2022 before streaming on Netflix a week later. Watch the film’s high-octane first trailer, below: