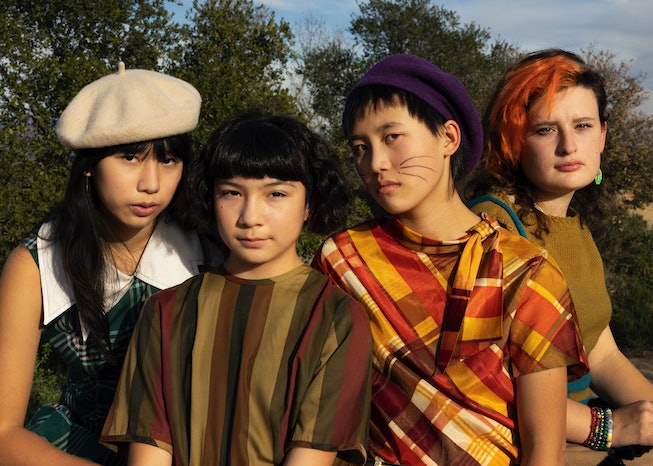 While most kids their age are concerned with Y2K nostalgia, the members of Los Angeles band The Linda Lindas are harkening back to something older and even more urgent. The group offers a fresh spin on the California punk of the late ‘70s and ‘80s (The Adolescents, The Bags), providing a sorely needed modern perspective, while touching on everything from youthful anxiety to systemic oppression to, well, cats.

The band, whose members range in age from 11 to 17, gave us one of 2021’s great viral moments with their performance of their aptly named hit song at the L.A. Public Library. Atop sludgy guitars, The Linda Lindas added a new chapter to punk music’s long history of rebellion, recalling The Dead Kennedys and their message-spreading contemporaries. Their most memorable career moment thus far? Playing The Smell, a DIY venue that fits just over 100 people, but one where many of their idols like Best Coast and No Age cut their teeth.

Consisting of two siblings (Lucia and Mila de la Garza), their cousin (Eloise Wong), and a close family friend (Bela Salazar), the four have been connected through music for most of their lives. They began performing together in 2018, getting early breaks performing with Bikini Kill and appearing in Amy Poehler’s coming-of-age film Moxie. Lucia and Mila’s father, Carlos de la Garza, is a successful producer and mix engineer, with credits including Paramore’s self-titled album, Best Coast’s Always Tomorrow, and Wolf Alice’s Visions of a Life.

Now, The Linda Lindas are back with Growing Up, a winning LP that shows how each member has developed as a songwriter and instrumentalist in their own right. The tracks are huge and hooky, capturing the broad emotional strokes of adolescence, most notably the title track and wistful standout “Remember.” And there’s a pervasive egalitarian spirit — you can feel the group’s closeness in the way they harmonize, the bass and guitar lines bouncing off of each other.

Here, we speak to The Linda Lindas about their debut album, turning their fans onto the underground music they love, and being cat people.

The album art that Eloise drew, that’s the four of you as cats. The show posters are cat-centric, you’ve got “Nino,” which is about Bela’s cat. So, why all the cats?

MD: I think we’re all just cat people. We all like cats and always have.

EW: Although, Bela’s the only one who actually has a cat.

BS: My cats are the communal cats.

LD: I think it’s just because one of the things we all have in common is that we all like cats.

In your early days, you were playing a lot of covers. Now that there’s more attention on the four of you making music, if that has affected the way you wrote songs?

LD: Pretty much the entire record was written before the video blew up. I feel like at this point, I should be more scared that [the album] is gonna reach a wider audience, but it’s been almost nine months since we started recording, so I’m just really excited to finally get it out. When you share it with your friends and the people that are most important to you first, it makes sharing it with the rest of the world a lot easier because you can be a little more mentally prepared for what other people might say about it.

We’re gonna get tons of criticism. We’re gonna get stuff that’s like “Oh, it’s not punk,” or “It’s too punk,” or “It’s pop,” or “It’s not pop.” But I’m really proud of it, I’m proud of all of us and what we’ve done. I think it’s super cool that we recorded this thing during summer vacation and now — we’re still writing songs, we want to put even more music out — but we worked really hard on writing and recording and making the music videos for all of them.

There’s a lyric on the title track where you say, “We can take turns taking the reins.” Within the band itself, are there different things that each of you does take the reins on?

MD: Lucia is always the first to know things and then I’m always the last to know. Eloise gets told things, but she always forgets ... I think all of us are in charge of the creative aspect, though. I think that for music videos, we all kinda come up with [ideas].

EW: We have a giant brainstorming session together. We do our little drawings and storyboards and we put them all together on a giant piece of cardboard.

LD: Bela and Mimi are in charge of telling us which days we should have boba on.

BS: Very important. If we raise our eyebrows at each other, then we know it’s boba time.

The Linda Lindas did exist for several years before the library video blew up. Do you feel like the time that you put in prior to your viral success gets downplayed?

EW: I think those years definitely helped. We were more prepared for all of this because of the three years that we spent practicing and making other stuff.

LD: I’m very grateful for those years before the viral video. I’d be so unprepared and I’m really glad that we had three years of practice before.

BS: I think in the beginning, when the video first went viral it was like a thing like, “This band is new.” But it doesn’t happen as much now when people say things. I think they’re starting to realize, “Oh yeah, this band has been around for the last three years.”

LD: Some people are like “Yeah, I’m an O.G. fan, I’ve known you since Moxie!” And that was just a few months before the library video. But we’re grateful for all the people.

You see a lot of times when a musician who has only been making stuff for a few months has something take off that they’re not prepared for everything that comes with it.

LD: I don’t think we were emotionally prepared for that. Mila was, like, 8 years old. That wouldn’t have made a whole lot of sense. Even right now, sometimes I feel like “Do we deserve this?” I would’ve felt even more that way then. But now I’m just kinda like, “It doesn’t even matter right now, because we’re just trying to make music.”

Do you feel like The Linda Lindas can be a gateway for people to get into the punk music and LA underground scene that inspired you four?

EW: I hope so. It’s definitely really cool that young people who discover our music can see this and be like “Oh, they were influenced by Alice Bag, The Adolescents? Who is that?” And then they can go back and see all the stuff that really inspires us and maybe be inspired by that, too. I like that.

LD: Yeah. There’s a lot of power you hold in art. I think there’s something for everyone, but punk is really special because it has a history of being about doing what you love and having the freedom onstage to do what you want and inspire something in others to say what matters to them.

Has there been an “I made it” moment for you where your success felt really tangible?

EW: I think when we played at The Smell. It was our first show since shelter-in-place. That one was really fun because it was at a place where a bunch of bands that we loved came up, like Best Coast and No Age and Bleached. Like “Wow! We get to be part of that?” Even though it’s such a tiny place, it’s so cool that we can be a part of that. We got to see all the people that listened to our music. We hadn’t actually seen them because everything that was going on had happened online. There were tiny children being carried by their parents and adult people bringing their older parents and it was like “Wow, it’s really cool to see all these people that support us.”

One of the songs that really jumped out to me was “Remember.” I know Lucia, you wrote most of that one. It does a really good job of capturing that feeling of hope and uncertainty that comes in your teenage years. What inspired it?

LD: The chorus, “I can’t remember the first thing I did today,” that was about every day feeling like the same day during the pandemic. Feeling like, “Oh my god, I could be doing so much more. I have so much time right now. I could be picking up new hobbies and reading and knitting and whatever.” But I didn’t do any of that, I kind of lazed around. I didn’t pay attention in school anymore. I was like “What am I doing?” It was also about being able to accept that you’re not gonna be perfect every day and you have to figure out that it’s okay to take a day to figure out who you are. I think that the pandemic really helped me do that.

Sometimes, when an artist has a standout viral song that’s been out for a while, they don’t always put it on their next album. Was there ever a discussion to that end with your first hit?

EW: I wanted to put it on the LP because there were some words I wanted to replace that were in the library video. We changed the words. First, we put a trigger warning or something, but it was “Idiotic Boy,” that was before the library video and we actually recorded a Halloween song where we sang it as “Idiotic Boy.” It was full of ableist words. We didn’t realize that until a little bit later. We were like, “Wait a second. ‘Idiotic Boy?’ We’re trying to squash oppression, but we’re kind of being oppressive with our song at the same time.” We didn’t want to try and be the oppressive force we were singing about, so we changed the words.

Is there anything else you would want to mention about the band or what you have coming up this year that we did not get to touch on?

LD: Before we did covers, when we were trying to figure out who should sing what song, Eloise always had the louder screaming songs like “Rebel Girl” and Bela had the talking songs like “Mystery Achievement” and some Ramones songs. Mimi and I did the more singsong-y songs. But now I think it’s cool that we get to write our own songs, because we do what we want. It’s cool to collaborate on songs, even though we haven’t gotten a ton of time to do that. I’m excited about writing songs together now.

MD: We all have different styles, but on the album, it all mixes together really beautifully and I think that’s really special.