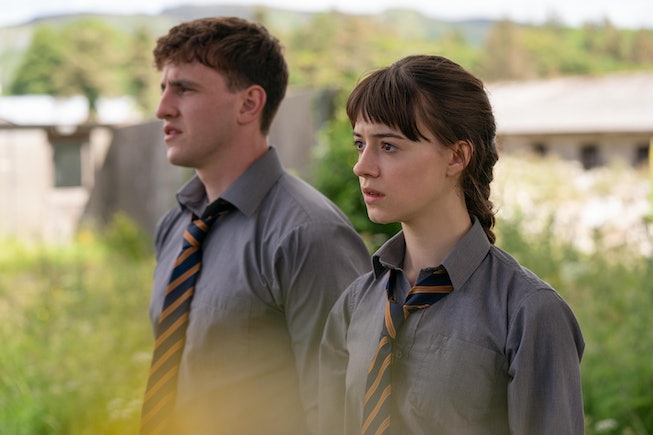 If you couldn't get enough of the sensation that was Hulu's steamy adaptation of Sally Rooney's hit 2018 novel Normal People, then you'll be happy to know that the show's soundtrack is now available to stream. Released onto Spotify on Thursday, the show's spare but effective musical landscape helped navigate the prickly peaks and valleys of Normal People's complicated plot.

Set in Ireland, Normal People follows the turbulent and intimate relationship that blooms between two classmates, Marianne and Connell, over the course of high school and college, as they try to work out their feelings for one another. Theirs is a complicated and messy journey, filled with a lot of sex scenes and tender moments that coheres into a nuanced consideration of love between two people. With the degree of drama, it would've been tempting to fill up the space with Frank Ocean, Caribou, and Elliott Smith — and certainly, music supervisors Maggie Philips and Juliet Martin did, but only when necessary.

Speaking to Spotify, Philips and Martin explained that the show's mostly spare soundtrack was a "super purposeful" decision. "We wanted to be very restrained with the music and only use the songs when we've kind of earned them, and use them at points for reflection," Philips explained. "Points to sit back and sort of reflect and process what's going on."

When Philips and Martin did employ a musical cue, they looked to Irish artists as much as possible, like folk singers Lisa Hannigan and Anna Mieke, the hip-hop duo Tebi Rex, and soul artist Uly, among others. And, of course, because this is a contemporary drama between two young people, there's the requisite Frank Ocean tune — "Nikes" in this case — and Imogen Heap's "Hide And Seek," a song that has by now accumulated its own loaded mythology.

Since the show's release, the actors behind Connell and Marianne, Paul Mescal and Daisy Edgar-Jones, have even curated their own playlists of what Connell and Marianne would be listening to, including tunes from Angel Olsen to Phoebe Bridgers and Kendrick Lamar.

Hear the full Normal People soundtrack below, and revisit NYLON's interview with Edgar-Jones on how she filmed all those sex scenes.