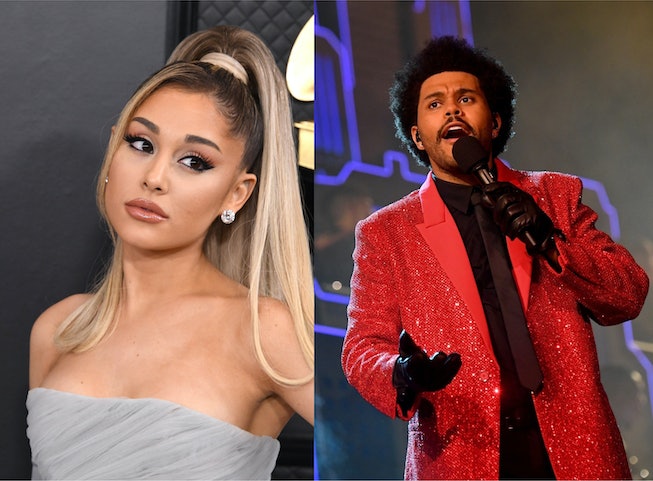 The Grammys (and his snub) may be long behind us, but that doesn’t mean The Weeknd is finished promoting After Hours just yet. The Canadian superstar is back with another remix from his fourth studio album, and this time it features an elegant assist from Ariana Grande and her light-as-air vocals. The two’s glistening rework of “Save Your Tears” arrived on Friday at midnight, and you can hear it below.

Both pop stars teased the collaboration on social media earlier this week, sharing an audio snippet of Grande’s ethereal harmonies. The remix is their latest joint track since the emotional ballad “Off The Table” from Grande’s last studio album, Positions. However their musical relationship, and IRL friendship, goes way back to 2014 when Abel jumped on Grande’s “Love Me Harder” from My Everything. Speaking about “Off The Table” in an interview, Grande described the writing process as “a very intimate moment [...] between two friends.”

The Weeknd also released a remix with Spanish pop sensation Rosalía for the one year anniversary of lead single “Blinding Lights,” last December.

Despite his unexpected beef with the Grammys earlier this year which resulted in The Weeknd declaring that he’s boycotting the award show — the “Heartless” singer is still coming off a monumental year. He released the highly-anticipated After Hours last March, and made his Super Bowl halftime show debut later that year.

In April The Weeknd made his first move into the NFT space with the auction of his first digital art collection called Acephaleous, comprising of select visual pieces as well as an unreleased song he’s not sharing anywhere else. Paris Hilton was reportedly one of the buyers, and he raised over $2 million.