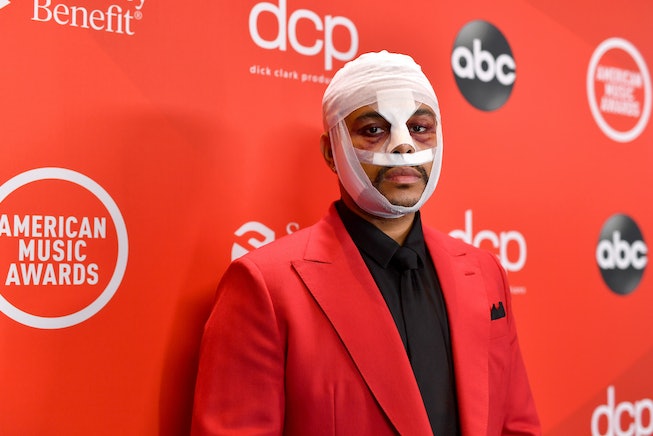 In the lead up to the 2021 Grammy Award nominations, there was only one person who seemed like a sure bet for at least a few wins: The Weeknd. Sure, there were tons of artists that seemed like strong possibilities. But The Weeknd, with his critically acclaimed #1 album After Hours and his accompanying #1 Hot 100 single “Blinding Lights,” seemed like a given. How could The Recording Academy possibly ignore what has arguably been one of the biggest, most successful albums of the year? Let alone, a strong contender for Song of the Year? It seemed like an impossibility — that is, until the nominations were announced yesterday morning. The Weeknd, long expected to be a leader of the pack, was completely shut out, nabbing nary a nomination.

Many were confused about the snub, immediately claiming that it was deliberate sabotage. It no doubt came as a blow to the artist born Abel Tesfaye — and he wasted no time making his stance publicly known. Taking to Twitter several hours after the nominations were released, The Weeknd said, “The Grammys remain corrupt. You owe me, my fans and the industry transparency...”

His fans and collaborators were quick to chime in with their support. Daniel Lopatin, better known as Oneohtrix Point Never — who met The Weeknd while he was scoring Uncut Gems (which Tesfaye had a cameo in) and worked with the singer on After Hours and his own recent release Magic Oneohtrix Point Never — replied, “sometimes it feels like we’re living in soulless paper thin times.” Another user joked, “Wore that suit 8 months straight for nothing [for real],” in reference to the red suit The Weeknd has been wearing in all the album’s accompanying videos.

According to rumors from industry insiders, The Weeknd’s snub may have had something to do with his recently confirmed Super Bowl Halftime Show performance. TMZ reports that, at one point, the artist was forced into negotiations with Grammy brass about whether he could perform at both the Grammys and the Super Bowl, which CBS is airing in back-to-back weeks in early 2021. According to sources, the two sides eventually reached an agreement, “but not without negotiations getting very testy.” Some believe that The Weeknd’s across-the-board snub might have been a form of delayed retaliation.

But according to Recording Academy Chief Harvey Mason Jr., these claims are completely unfounded. In fact, even he was surprised. “We understand that The Weeknd is disappointed at not being nominated. I was surprised and can empathize with what he’s feeling,” he said in a statement last night. “His music this year was excellent, and his contributions to the music community and broader world are worthy of everyone’s admiration. We were thrilled when we found out he would be performing at the upcoming Super Bowl and we would have loved to have him also perform on the Grammy stage the weekend before. Unfortunately, every year, there are fewer nominations than the number of deserving artists. But as the only peer-voted music award, we will continue to recognize and celebrate excellence in music while shining a light on the many amazing artists that make up our global community.”

Later, he tried to dispel any rumors that The Weeknd’s post at the Super Bowl had anything to do with the nomination results, adding, “To be clear, voting in all categories ended well before The Weeknd’s performance at the Super Bowl was announced, so in no way could it have affected the nomination process. All Grammy nominees are recognized by the voting body for their excellence, and we congratulate them all.”

Whether The Weeknd is right or The Recording Academy is will probably never be officially established. But if there’s one thing we can assume, it’s that the non-nominated Weeknd will most likely opt out of performing at next year’s ceremony. Which, when it’s all said and done, would make the whole “very testy” negotiation process a complete waste anyway. But alas, such is life! Now, #StreamAfterHours!

UPDATE: The Weeknd has confirmed the expected. In a recent Instagram text post, the artist writes, "Collaboratively planning a performance for weeks to not being invited? In my opinion zero nominations = you're not invited!" Just as we assumed, The Weeknd will not be making an appearance at next year's Grammys ceremony. Guess we'll have to just wait one week to see him take the Pepsi Stage at the Super Bowl Halftime Show instead.