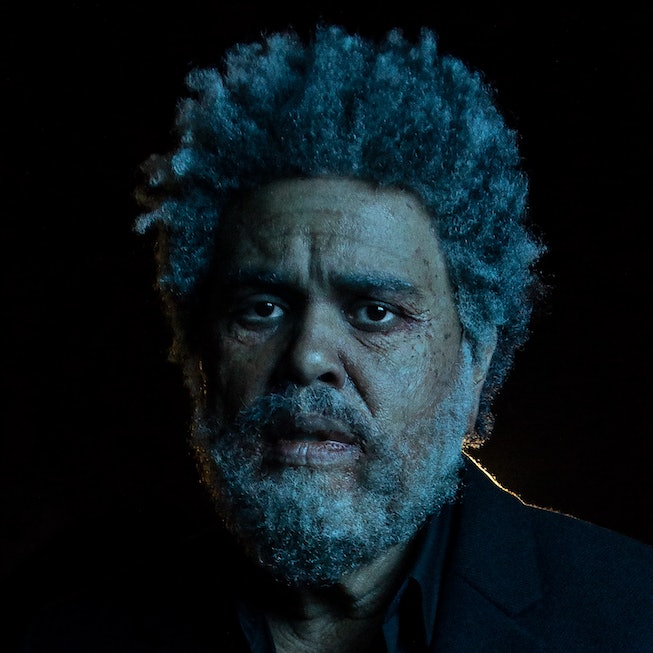 When we last encountered The Weeknd’s Abel Tesfaye on his 2020 opus After Hours, he was stumbling around Vegas’ seedy, neon-lit streets with a maniacal smile and stone-cold demeanor. The project took his hedonistic ponderings to cinematic and existential new levels, questioning his dealings with drugs, sex, and celebrity through his loneliness, paralyzing habits, and manic bravado. As much as he didn’t want it to, the night’s end was always coming. “I’m running out of time/ 'Cause I can see the sun light up the sky,” he sang on the blockbuster hit “Blinding Lights,” viewing the sun as vampiric kryptonite. On his follow-up Dawn FM, the light has finally caught up with him.

If The Weeknd’s embrace of darkness was an excuse for and an escape into debauchery on After Hours, then Dawn FM uses the light to expose the emotional aftermath, and how past trauma has led to stunted growth. The former project was a spiral of self-destructive scenes and admissions of regrettable, manipulative behaviors towards lovers: “Made you put down your guard/ I know I made you fall/ Then said you were wrong for me,” he admitted on its title track. Dawn FM is a continuation of that narrative, showing us where Tesfaye has landed in that emotional debris and how his actions have changed as a result.

How does Tesfaye bring us into the light? By tuning us into purgatory’s ominous radio station, 103.5 Dawn FM, hosted by none other than Comedian Jim Carrey. “You've been in the dark for way too long/ It's time to walk into the light,” Carrey coos. After he eschews our fear about a cryptic “transition,” we’re thrust into The Weeknd’s new wave opera centered around an FM station with the capacity to “free your soul.”

What follows is an album conceptually stronger and much cinematically innovative than its predecessor. Dawn FM’s first official track, “Gasoline,” is an immediate highlight that showcases Tesfaye’s vocals like never before. Over cascading drum hits and beaming synths, Tesfaye enters in a burly tone that hovers between a brawny robot and the vocal posture of Roxy Music’s Bryan Ferry. We’re hearing The Weeknd in a register he’s never activated and not only is it unexpected and exciting, it fits flawlessly against the bouncy Depeche Mode-reminiscent instrumentation. During the chorus, he slips back into the slick nihilistic melisma he’s mastered so well, asking his lover to douse his body in gasoline if he goes peacefully in his sleep, “It don't mean much to me.”

With Dawn FM, The Weeknd has given us innumerable themes and symbolism to unpack with an ostensibly upbeat soundtrack. (The tension between leaving the blinding illumination of city nightlife for the daytime’s routine and natural sun light and using radio nostalgia as a way to reflect on The Weeknd’s emotional fuck-ups, brilliantly pointing out it’s only a matter of time before every generation will has an “oldies station.”)

Although these songs delight in jaunty synth melodies, there isn’t a happily ever after.

After Hours emphasized suspenseful synthesizer drops, a blend of U.K. dance genres from dubstep-lite to moody drum and bass, and care-free ‘80s pop. Dawn FM pushes further into the latter. The intricate synth work and sinister drum huffs during the chorus of “How Do I Make You Love Me” take us to the blissful, dark depths of a nightclub, where our dance-floor connoisseur tries to win over the subject of his affection: “I only see what’s right in front of me,” he sings. Later, on the Daft Punk-y “Sacrifice,” he blends a funky Michael Jackson flair with lyrics about his inability to commit.

As opposed to his previous releases, there’s more push-and-pull between The Weeknd’s desire for emotional versus sexual climax. Although he teeter-totters between pure committal regret on “Out of Time” to then wanting to keep things in the friend-with-benefits zone on “Best Friends,” Dawn FM showcases the most of Tesfaye’s relationship maturation. And although these songs delight in jaunty synth melodies, there isn’t a happily ever after.

Instead, the album’s latter half portrays the consequences of him opening up his heart. He begs for his heart to be spared on “Don’t Break My Heart,” pleading, “I’m falling apart already.” But it’s inevitable — a taste of his own medicine. On “I Heard You’re Married,” he, well, gets played by a woman who is in fact married. The refreshing part is that despite his heartbreak, he doesn’t judge or demean his lover. He’s outgrown that type of game. “Now I'm sure you have your issues and your reasons,” he sings. “Girl, I'm way too grown for that deceivin'.”

Dawn FM is not only fuller-sounding than After Hours but it feels more realized. It might not have the massive radio-ready hits but it embodies growth in all aspects for Tesfaye as a singer, writer, and conceptual visionary. In a striking interlude with Quincy Jones, one of the album’s collaborators, the iconic producer reflects on familial trauma. “Looking back is a b*tch, isn’t it?” he chuckles. It sure f*cking is. The strength of Dawn FM’s light isn’t that The Weeknd seems happier or sounds dramatically different, but that he always finds a way to undercut the bleakness with an endearing sense of humor and absurdity.

The Weeknd’s Dawn FM is out now.