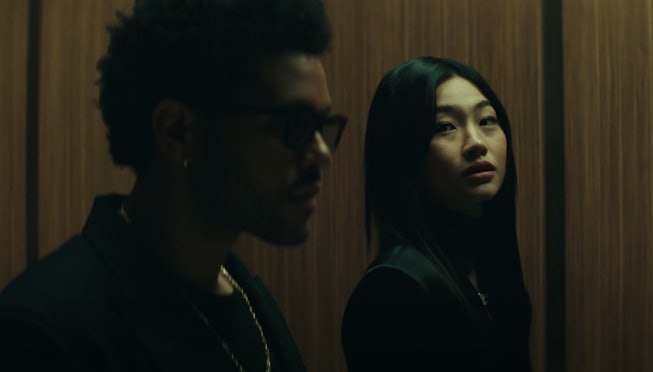 In The Weeknd’s latest music video for Dawn FM single “Out of Time,” the singer finds himself enthralled in a whirlwind romance. The visual, which was released this morning, stars the Grammy-nominated artist alongside Squid Games’ breakout star HoYeon Jung, with legendary actor Jim Carrey making a creepy appearance at the end.

At first, the visual for “Out of Time” appears to follow a simple boy-meets-girl format. The Weekend stumbles into a hotel and makes his way upstairs to visit a karaoke bar. On his way up, he meets Yeon in the elevator and is captivated by her beauty. After a few knowing glances, the two embark on an unplanned first date.

Together they sing “Out of Time,” and bounce around the hotel while getting to know each other. Throughout the video, they’re seen having drinks at bar and engaging in a playful food fight over dinner. Clips of their spontaneous evening are intercut by shots of the couple singing together. It’s all very dreamy and romantic, but right when it seems like their meet-cute could blossom into something more, the night takes a Twilight Zone-worthy detour.

Suddenly the music fades out and is replaced by an ominous broadcast, narrated by Carrey. “Don’t you dare touch that dial, because like the song says, you are out of time” he announces. “You’re almost there,” Carrey continues, “But don’t panic, there’s still more music to come before you’re completely engulfed in the blissful embrace of that little light you see in the distance.” The weekend is then placed on an operating table, while Carrey, who plays a mad surgeon, alters his appearance.

“Out of Time,” is the fourth single from the Weeknd’s most recent album, Dawn FM. The record was released on January 7th, and, according to the singer, it’s a “journey to the light at the end of a tunnel.” Dawn FM is an artistic sequel to The Weeknd’s previous, brooding, record After Hours.

The Grammy-winning singer is undoubtedly telling a story, though the plot still remains unclear. The music video for “Out of Time,” ends with a chilling cliffhanger. Hopefully, we won’t have to wait too long to see what happens next.

Watch the visual for “Out of Time,” below.