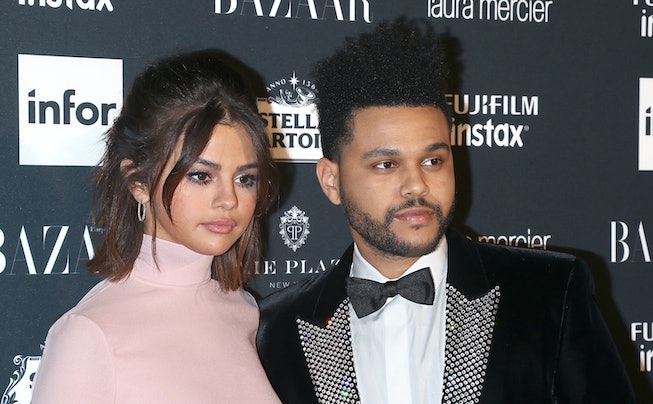 The silver lining of a musician experiencing acute to profound heartbreak is that they'll inevitably record a breakup album as part of the healing process. It's low-key an integral part of the music industry itself — we don't make the rules! This holds true for Abel Tesfaye a.k.a. crooning legend The Weeknd, and his 2018 EP My Dear Melancholy, which is widely believed to be his breakup album from Selena Gomez.

The usually media-shy Tesfaye opened up about the writing process behind My Dear Melancholy with Esquire, calling the process cathartic. That's breakup-healing jargon, loud and clear! The writing and recording process were quick by industry standards; Esquire reports that it only took Tesfaye two and a half weeks to hammer out the six-song EP.

Tesfaye was reluctant to officially admit who the songs were directly about, but he did have something to say about My Dear Melancholy short length. “The reason why it was so short is, like, I think I just had nothing else to say on this,” he explained. “It was just, like, this cathartic piece of art. And yeah, it was short, because that’s all I had to say on this situation.”

Why record a winding, 20-song LP when you can say what needs to be said in six songs? In the end, the important thing isn't the length of the record, but if it helped Tesfaye move on and feel better. “Yeah, of course," he said. "I mean, that would have sucked if I didn’t.” Again, points were made.

For those who may have forgotten the finer details of the Tesfaye-Gomez relationship, the two dated from January to October 2017 and managed to end things on good terms. "Something that I’m really proud of is that there’s such a true friendship [between me and The Weeknd]," she said after their breakup. "I truly have never experienced anything like that in my life. We ended it as best friends, and it was genuinely about encouraging and caring [for each other], and that was pretty remarkable for me."