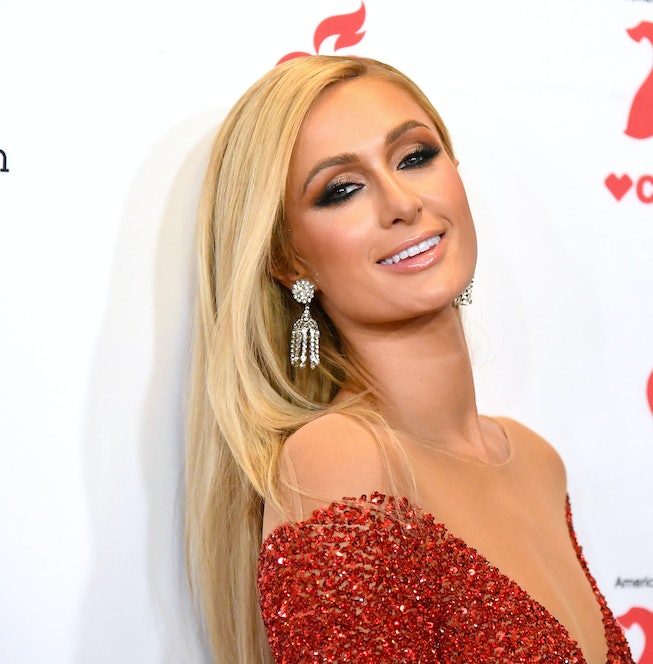 After decades in the spotlight, it's easy to think that one already knows everything there is to know about Paris Hilton. She's a lovable yet spoiled heiress who thought Walmart sold actual walls, accessorizes with Chihuahuas, and repeats "That's hot and "Loves it" ad infinitum, right? Wrong! Get ready for This Is Paris to turn that assumption on its head.

The new YouTube Originals documentary explores a Paris stripped of her meticulous public brand; viewers see the real her for what feels like the first time, her dramatized ditzy voice swapped out for surprising vulnerability. And what's revealed is a Paris more driven, intelligent, and tender hearted than she's ever taken credit for. "When I look at my life I’ve created this cartoon. This fantasy world cartoon," she says while standing in massive walk-in closet the size of an average studio apartment. "The thing is, I don't five a fuck about any of these things."

The documentary is stacked with illuminating twists, and we picked our top 10 favorites, below.

The Glamour Is A Front

The glitz that's come to be associated with Paris couldn't be further from her true self. "Her brand is a lot more glamorous than she is," reveals younger sister Nicky. "She’s a chick who likes to scrap up at home with her dogs, eat leftovers. She sounds like Homer Simpson."

"She has this persona that she’s this sexy bombshell but she really is a boy at heart,” continues Nicky. It's bizarre knowing that the person who coined "That's hot" in a raspy, baby voice was a tomboy growing up, but truth is, after all, stranger than fiction.

She's Been An Animal Freak From The Get-Go

While we may know Paris as one of the pioneers of Chihuahua visibility in the entertainment world, her love of animals go well beyond purse-sized canines. According to her mom Kathy Hilton, Paris used to save up her money to buy monkeys, snakes, and goats, and her love for animals was so strong that Kathy was convinced her daughter would become a veterinarian. She remembers a particular faux-pas with clarity: "Once she let the snake out the cage...at the Waldorf." Paris having Eloise At The Plaza energy just makes sense.

Nicky Hilton Is A Ride-Or-Die

Nicky was more of a good girl Yin to Paris' wild child Yang, but the two sisters have a strong bond that's followed them well into adulthood. Nicky knows Paris better than anyone, and she's not afraid to be real — and sometimes even harsh — with her sister. When Paris complains that she's overworked, Nicky calls her greedy and unable to turn down a check. Sisters can say things like that to each other! It's called tough love! Nicky's ultimately looking out for her sister, whether that meant flipping over covers of the New York Post with a teenage Paris on the cover, to voicing wariness of the many alleged Yes People and "kiss asses" in her sister's life.

Kyle Richards Is Her Aunt

True Real Housewife of Beverly Hills heads know that Kyle Richards (and by default, her sister Kim) are aunts to Paris and Nicky. But in case you're not privy to the franchise, now you know. And no, not everyone in Beverly Hills is related.

She Has Major Trust Issues

And rightfully so! Paris is candid about past, abusive relationships that have impacted letting herself trust others. There's the infamous sex tape leak, which she refers to a private moment with a teenage girl not in the right headspace. "If that happened today it would not be the same story at all," she says. "They made me the bad person, like I did something bad."

Her bad luck with boyfriends has also created other habits, like getting a new computer with each new relationship (past boyfriends have broken her computers in fits of rage) and hiding spy cams throughout her home until she can fully trust a new person in her life.

Her Insomnia And Nightmares Are Out Of Control

An important point of conversation in This Is Paris is her battle with sleep. Paris suffers from severe insomnia, often only clocking in two to three hours of sleep per night, not from wild partying, but from fear. When she does finally hit her R.E.M. cycle, she's plagued with a recurring nightmare. "I'm in bed and these two people come into my room," she explains. "They say do you want this to happen the easy way or the hard way? I'm trying to just run..."

Her Experience With "Emotional Growth Schools" Were Traumatizing

When Paris began partying during her high school years in New York City, her traditional and conservative parents went into high gear. In a fit of fearful concern over their daughter's well-being, they sent Paris away to multiple "emotional growth schools," which were basically educational labor camps in the middle of nowhere.

Paris obviously wasn't having it, and ran away several times. "We ran through corn fields, through mountains," she says of one such breakaway. "The guys who worked at the camp grabbed us and then we got back and they literally beat the hell out of us in front of everyone to let everyone know that if you run away what happens."

But nothing compared to Provo Canyon School, which Paris describes as "the worst of the worst." The school would prescribe its students unnamed pharmaceuticals, which left them feeling tired and numb. When Paris was caught throwing away her pills, she got sentenced to solitary confinement. "I feel like a lot of the people who worked there got off on torturing children," she says of her 11-month matriculation.

She Feels Responsible For Influencer Culture

Paris is the original influencer, whether you like it or not. She was one of the first people to be hounded by the paparazzi 24/7, and a good photo of Paris could allegedly snatch a paparazzo anywhere from $50,000 to $1 million during her early aughts heyday. The credit, however, is bittersweet. "Sometimes I feel like I helped create a monster,” she says. She also worries about how influencer culture bled into the hyper use of filters on photos (or "Instagram Face" as coined by writer Jia Tolentino) and what filter-related dysphoria means for those who grew up with social media.

Upwards of 16 hours and 9 minutes! We know the Paris Hilton brand never sleeps, but damn!

She Actually Knows How To Clean

The Simple Life may have convinced viewers that Paris had never used a sponge or a mop in her life, but it very much wasn't the case. One of the best parts of the documentary is when Paris' Provo Canyon School classmates reunite and end up roasting her for her feigned ignorance on the show since they knew how she had been forced to do manual cleaning labor during their stay at the school.