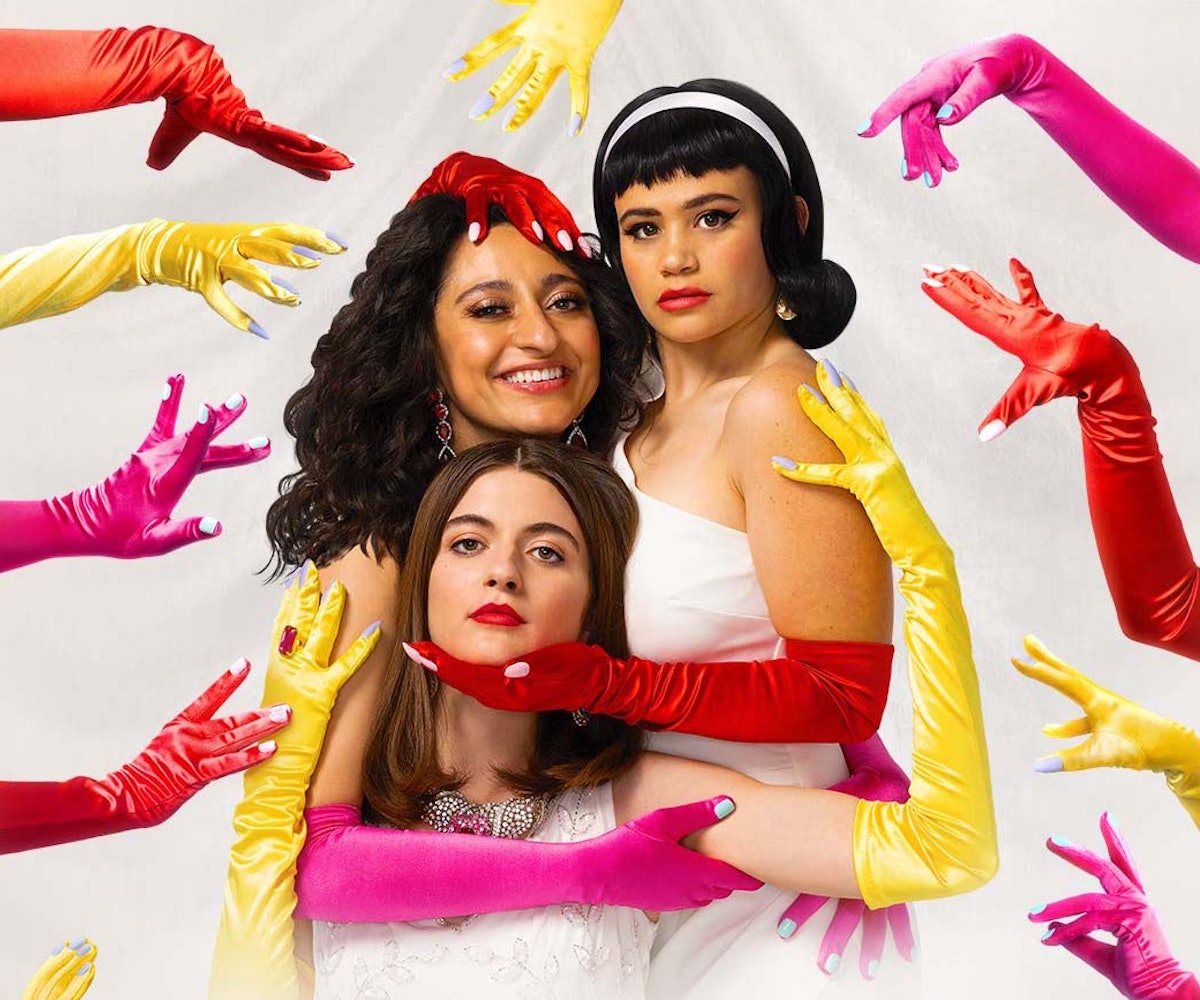 After two years since its series premiere, Three Busy Debras returns to Adult Swim for its second season on Adult Swim and HBO Max on Sunday, April 24. The wait was well worth it, as the show returns with more hilariously wacky gags, exciting cameos (Patti Harrison and SNL star Sarah Sherman, who also joined Season 2 as a writer), and a bigger and more ambitious expansion of the mini Debra universe that is Lemoncurd.

“I feel like we really learned what the show was and where we could take it and how to write for both our strengths, for local actors that we found that we loved, and for our amazing crew,” says Sandy Honig, one of the show’s creators who plays Debra alongside Mitra Jouhari (also Debra) and Alyssa Stonoha (Debra, duh).

While most of the first season was shot on location in Seattle and written by its three leading stars, they brought on additional writers to join the show for its second iteration, as well as locals from the city’s theater scene to help play the funny and beloved residents of the fictional suburban town. The cast and crew also filmed the new episodes in a former flour mill-turned-soundstage that took the Debras outside of the confines of their cookie-cutter mansions. In some of the upcoming episodes, we see the trio rob a milk tank (for themselves) during a neighborhood drought, go to the Lemoncurd mall, and experiment with new formats with four more episodes than the previous season.

“Half the episodes in season two are special episodes, and it just feels like our bread and butter,” says Stonoha. “We had the time, and we learned so much about the characters and introduced the audience to the characters enough that we had the space to do that.”

Over brunch in Los Angeles, the women behind Three Busy Debras spoke with NYLON about their most ambitious season yet, from new writers joining the show and their massively talented cast within the Lemoncurd world to wild set ideas that came to life.

What did you learn after wrapping the first season of Three Busy Debras?

Sandy Honig: So much. I feel like we really learned what the show was and where we could take it and how to write for both our strengths, for local actors that we found that we loved, and for our amazing crew, and knowing just what they were capable of and writing to their strengths. So we can push everything just so much further.

Did your writing process change at all for the second season?

Mitra Jouhari: Well, our first season, we were the whole writer's room, the three of us. Our second season, we had a writer's room. So Diana Tay, Sarah Sherman, and Evan Waite joined us for that season, which added so much to the show. The three of us have a real language and really share a sensibility with regards to the show. So bringing in people who really understood that elevated it so much. Sarah Sherman is this amazing visual artist and so wild, and there's so much overlap within our sensibilities. But she was able to push things so far visually, Evan Waite is an incredible joke writer, just prolific...

M.J.: So talented. So having people like them in the room elevates the show so much comedically.

Were there any favorite moments or examples of that?

M.J.: Yeah, it's nice hearing what they think each of us would do in any given situation. We have an episode that takes place in a mall and one of our favorite Evan moments is he, without us asking, sent us a list of like 50 mall store names that were all hilarious. And we used as many of them as we could. [Editor’s Note: Store names include Just One Shoe, Pita My Stomach, Pool’s Gold, The Returns Store, Slippy’s Wet Rugs, to name a few.] He’s constantly just always thinking of more jokes.

Alyssa Stonoha: Reading Sarah's joke for the first time of the parmesan falling on pasta and the reveal that it's Sandy filing her nails... I was like, ‘Sarah, what the f*ck? How did you think of that?’

M.J.: So disgusting… and beautiful.

The show is often described as a live cartoon with its funny and absurd concepts. How far did you take that this season?

A.S.: We had a whole scene that took place at a carnival.

M.J.: It was like a 30-second scene that required a full carnival.

S.H.: Our production designer is great in that he makes everything happen, but he is very candid when he's like, ‘You know what…’

A.S.: ‘Does this need to happen at a carnival?’

S.H.: ‘Does the scene need to take place on an active roller coaster? And if so, we'll make it happen. But if not, could it be a room?’

A.S.: And guess what? When we changed it, scene’s a lot funnier!

M.J.: But the really great thing is no one is stopping us from writing exactly what we want to see. And they work really, really hard to make those things happen. Just sometimes they don't need to happen.

A.S.: And they make almost all of them happen above and beyond the expectation.

M.J.: I really learned we have to write what we imagine and not limit ourselves because there are things that I wrote off as not being possible that were. And that is such a testament to our crew.

Is there a specific scene where that happened?

S.H.: Well, we were having a big issue with this scene where Alyssa's supposed to get shot into the ceiling. And we were trying to figure out exactly how to make that happen because of the dimensions of the set, but then also we had lights. So it's like, ‘Where does she go? How high can we pull her? Do we have to build a full rig around the set to pull her up?’ And then, basically we realized, days before, that we could just put a dummy with an Alyssa wig and pull it.

A.S.: And it's funnier to see the body limply fly through the sky.

You really expanded the world of Lemoncurd in the second season, from new places in the town to the people that live there.

A.S.: We got to bring back a lot of actors that we cast and met in Seattle, like local actors. And we got to write to their strengths. Ray Tagavilla, in particular, he’s in the first episode of season one playing a cop, and then in season two, he’s promoted to the Dairy Brigade. And Rachel Pate, she plays a cop in season one, and she's also in the Dairy Brigade season two.

M.J.: And Kelsi Umeko, who plays Ray's wife. These are all people that we were so obsessed with from season one and just met through them auditioning for the show season one. Kelsi was a store clerk at a purse store in season one and just had a couple lines but was so funny. And every role that we wrote, we’re like, ‘Kelsi could do this.’

S.H.: We literally pitched her for every single part that we were writing. And it was also cool because in the first season it was a lot of setting up who our characters were and how they interact. So any interactions with the town were like one or two lines, like not very big parts, but then knowing the people that we loved so much and being able to write episodes and parts for them was so much fun.

A.S.: And we were learning from the casting process, too, because then we cast new people in Seattle that we hadn't met before that in particular were from the theater scene, so they could audition for season two. Like Anne Allgood plays the Cockney Woman in episode one.

M.J.: We brought back Carol Swarbrick, who played Barbra in season one, who we worship.

S.H.: We really do. And she wipes the floor with us acting-wise, and we're all okay with it.

A.S.: It's embarrassing to act alongside her as well.

S.H.: We just surround ourselves with these amazing, amazing theater actors.

One of the episodes in season two is a play in three acts, which was really exciting to watch. Did you play around with new formats this season?

A.S.: I think having a first season under our belt where we do have the horror episode in season one, but if you've watched season one, you're kind of accustomed to the tone of the show. So then season two, which is also four more episodes than season one, was when we got to do a lot of special episodes because we love to do genre parodies. Half the episodes in season two are special episodes, and it just feels like our bread and butter. We had the time, and we learned so much about the characters and introduced the audience to the characters enough, that we had the space to do that.

S.H.: Yeah, it was also awesome because in the first season we shot mostly on location. But going into the second season, we got this amazing opportunity to transform this old flour mill into a soundstage, which didn't really exist in Seattle before that. So our production designer John Lavin created all of these incredible sets.

S.H.: And sometimes when I watch the show, I go, ‘They built the whole set for the 15 seconds that I see it.’

M.J.: And the amount of care and time. I mean it's astonishing.

S.H.: But it's also cool because they build the set around the jokes. We had this scene where it takes place in a coffee shop, and we needed one of the walls to be able to be hammered into, so it needed to be a specific kind of wall. So the entire coffee shop was designed around this wall. Things like that.

A.S.: Just so much blood, sweat, and tears went into it.

S.H.: But also laughs and love.

NEXT UP
Culture
Phoebe Dynevor Will Not Return for Bridgerton Season 3
Culture
Succession Season 4 Trailer Explodes With Family Drama
Culture
6 Shows To Binge Once You've Finished 'The White Lotus'
A Night Out
A Night Out With Rachel Bilson
Style + Culture, delivered straight to your inbox.