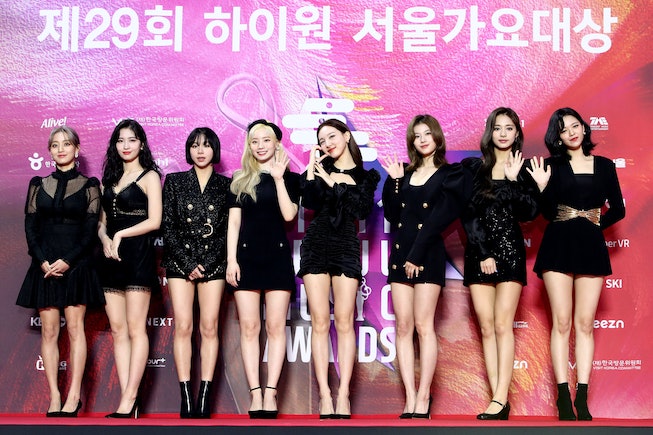 South-Korean based girl group TWICE is bringing its music back overseas for the first time since 2019. The K-Pop stars just announced the US leg of their upcoming tour III, and are set to visit five major cities across the country.

The famous group was formed by JYP entertainment in 2015, on the reality music competition show Sixteen. The series challenged its contestants to a variety of singing competitions, in order to secure a spot in a new pop group. Each of TWICE’s members — Nayeon, Jeognyeon, Momo, Sana, Jihyo, Mina, Dahyun, Chaeyoung, and Tzuyu — won the competition, and they’ve been working with one another ever since.

Together, they’ve created viral pop-hits like “The Feels,” “Alcohol Free,” and “I Can't Stop Me.” Their latest album Formula of Love: O+T = <3, was released earlier this year to critical acclaim, and quickly became a fan favorite with millions of streams worldwide.

III is TWICE’s fourth world tour, and their first time performing since 2019. That year the girls held the Twicelights, a concert-experience which included stops in both Asia and America. However, due to COVID-19 restrictions the group had to cancel their last two shows in Seoul and Tokyo. According to Elite Daily, the group hosted a virtual concert titled Twice: World in a Day to make up for the lost performances.

From the looks of things their upcoming tour should go according to plan. Their continental adventure begins on December 24th in Seoul and concludes on February 26th in New York. Ticket sales have yet to be announced, but fans can follow the groups social media accounts to stay up to date.

Look below for their full tour schedule, and get ready to see TWICE perform at a venue near you!