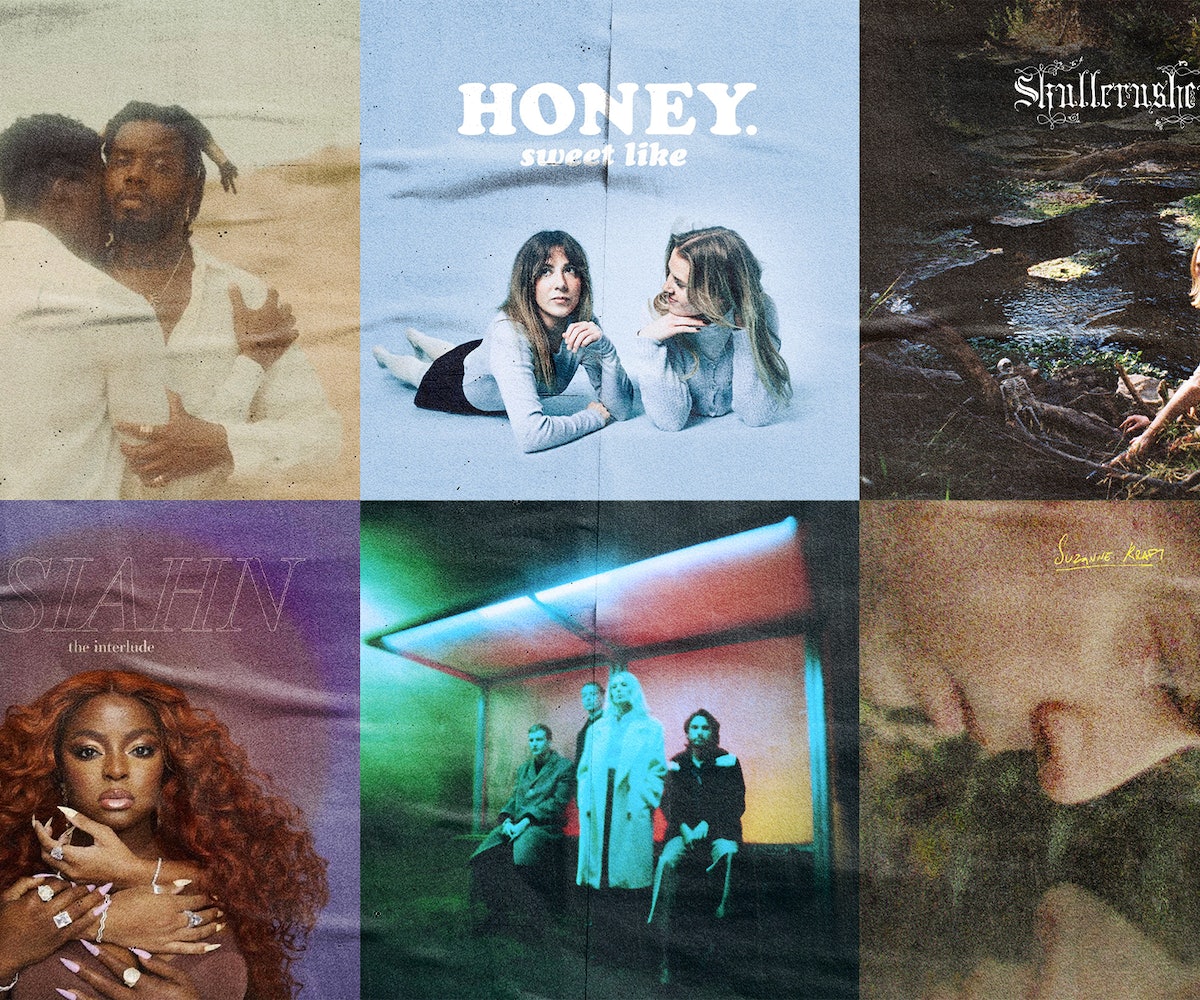 What a whirlwind first half of 2021 it has been, one that’s given us Olivia Rodrigo’s newly coronated princess of pop status, Doja Cat’s highly-anticipated new album, Tyler, the Creator’s return, Justin Bieber’s best pop album in a long while, and much more.

But what about the many great releases that fell just below the mainstream radar, projects that we desperately love and are enraged that people aren’t talking about more? Below, we’ve rounded up some of the most underrated projects of 2021 so far, the albums we haven’t stopped spinning all year, from ABBA-remniscent pop from Sweden duo Honey., to stormy folk from Skullcrusher, and fiery psychedelic rock from Nigerien Mdou Moctar. Read on to learn why each album deserves your attention, and the standout tracks to hear first.

We don’t know much about the Swedish duo that’s behind Honey., but we do know that their sweet like EP is one of the best embodiments of “pop that sounds like ABBA” that we’ve heard in a minute. Tracks like “Do It All Again” and “When Harry Met Sally” are the perfect swaying blockbuster anthems that you’d imagine would play on the walk home after a very good first date, or a tragic break-up. Or, just casually daydreaming for when either of those things happen.

Standout tracks: “Summer Fling,” “Do It All Again”

Even though Wolf Alice’s third studio album ran an insane victory lap around U.K. media, it still doesn’t feel like enough people have heard their stunning new effort Blue Weekend. The record is cinematic and extravagant, lush and immersive, bopping from shaking walls of shoegaze to cosmic country to grunge shouty punk. “Ah! It isn’t loud enough,” lead singer Ellie Rowsell screams on “Play The Greatest Hits,” a fitting motto for the album, too. The biggest drawback critics have given the album is how transparent their influences are, but who really cares when they make it sound this good.

Standout tracks: “Lipstick on the Glass,” “How Can I Make It OK?,” “Delicious Things”

If you ever find yourself feeling skeptical about love, it may be worth reminding yourself with a spin of serpentwithfeet’s gorgeous sophomore album, DEACON. On it, the New York-based musician crafts a heavenly and lush oasis in honor of the love he shares with his partner, a partnership as holy and destined as that of a greek myth. “I went to bed single now I'm kissing/ A man that was once a hyacinth,” he sings on the album opener. But his definition of love is generous enough to encompass his friendships, and he pays homage to them on the warm standout track “Fellowship,” one of the best songs I’ve heard this year. The record’s sound lives in that gold aura between gospel and R&B, and its message is nothing short of a benediction.

Like A Stone is the third studio album from Philadelphia indie rock band Remember Sports, and is one of their best yet. Over 12 songs, songwriter and singer Carmen Perry’s expressive, distinct singing voice — a loose and wild half-yodel — provides the perfect anchor to the band’s rowdy basement rock. She sings about her fear of the end of a relationship, and wanting to be the object of someone’s affection again. You know, all good and great late-20s musings and things.

It’s not hard to understand why Mdou Moctar’s Afrique Victime was universally beloved by music critics. The Niger-based, Tuareg musician and, most importantly, savage guitar shredder’s latest album is great for this current moment of renewed communion. It’s psychedelic rock and blues that’s made even more unforgettable with Moctar’s vivid, lightning-like guitar playing that is meant to be experienced in community — the songs are protest songs, political songs, and love songs, and often include chants and call-and-response. Don’t worry about not understanding the lyrics, its energy is universal.

Skullcrusher is the project of Los Angeles singer-songwriter Helen Ballentine, who just last year released her self-titled debut EP, an intimate and roving four-song collection about “the ways you become yourself when you aren’t looking.” The stormy, folksy songs met their followups this year with her latest EP, a project that shows the ways Ballentine is still growing. On the wild, banjo-laden “Steps,” she gathers the courage to be vulnerable, and on “Song For Nick Drake,” she reflects on her relationship with the musician’s music. The songs are bright, flickering glimpses into Ballentine’s inner psyche, made all the more enchanting by the dewy pastoral soundscape she enlivens them in.

Cult NYC DJ, producer, and artist Doss dropped a project that lives up to its name. 4 New Hit Songs is the bliss of serotonin released on the dance floor pristinely distilled into four euphoric tracks. On “Puppy,” glittering bleeps over a skipping dance beat feel exactly like that rush of joy from seeing a small animal. On “Strawberry,” waves of shoegaze color the track with a sweet sheen of nostalgia. Whatever the emotion these songs will strike in you, expect to feel them at max level.

Standout tracks: You can’t go wrong with any.

One of the best R&B projects we’ve heard this year comes from Asiahn, a rising artist but veteran songwriter who’s penned hits for Jennifer Lopez, Pitbull, Drake, Lil Wayne, and more. The Interlude, her debut project on her new home, Since the 80s and MoTown Records, is a plush, pastel-hued fantasy and unbelievably pretty listen. On “Get Away,” a song about fleeing to paradise with a lover, her crystal vocals float in a sea of warm synths and glittering harp, an actual sonic paradise. Somehow, Asiahn’s managed to find a formula where it’s nearly impossible for her to make a bad song.

Standout tracks: “Get Away,” “My World”

About You, Suzanne Kraft

Suzanne Kraft is the project of Los Angeles native Diego Herrera, a DJ, musician, and songwriter who’s now living in Amsterdam. Though he made a name for himself with his electronic, ambient compositions, he eschews that sound for something organic on his newest album, About You. Singing in a husky whisper, Herrera tells stories about budding love and heartbreak over glowing and hazy bedroom pop beats. And while it can be hard to fully decipher what he’s singing sometimes, it’s also what makes you listen closer.

Standout tracks: “On Our Hands,” “Waiting”

Sensational is the follow-up to Denmark musician Erika de Casier’s debut album Essentials, and both projects live up to their names. Over the 13-track record, de Casier delivers another stellar slate of alluring and sleek alt R&B songs that linger like a plume of expensive perfume. Like most expensive things, the magic of her songs occur on the subtler levels; her voice stays a breathy whisper throughout and her beats feature delicate harpsichord and guitar. Before long, the sensational de Casier universe sets in.

Standout tracks: “Drama,” “No Butterflies, No Nothing”

Charlie Hickey’s debut EP Count The Stairs features background vocals from his friend Phoebe Bridgers. Their voices mingle together softly at a particularly poignant moment on opener track “No Good at Lying,” a song about the possible realities of our dreams. It’s a stunning standout on the project that puts his vivid songwriting front and center: “We can fly and still talk/ Be at the Hagia Sofia/ We could see my grandma/ She's been gone for so long.” Prepare a box of tissues before pressing play.

Standout tracks: “Count The Stairs,” “No Good At Lying”

With cosigns from Billie Eilish, Phoebe Bridgers, and Florence Welch, Arlo Parks’ indie rock is easy to love. Her songwriting — sharp, witty, and poetic — can be credited to her first love: writing poetry. And her eye, discerning and observant, is everywhere on her debut album Collapsed In Sunbeams. “I was waiting for the bus one day/ Watched a fight between a artsy couple escalate/ Strawberry cheeks flushed with defeated rage,” she relays on “Caroline,” her perspective offering a generous and tender portrait of a public argument. It has an effect of leaving each of her songs with what feels like a valuable lesson.