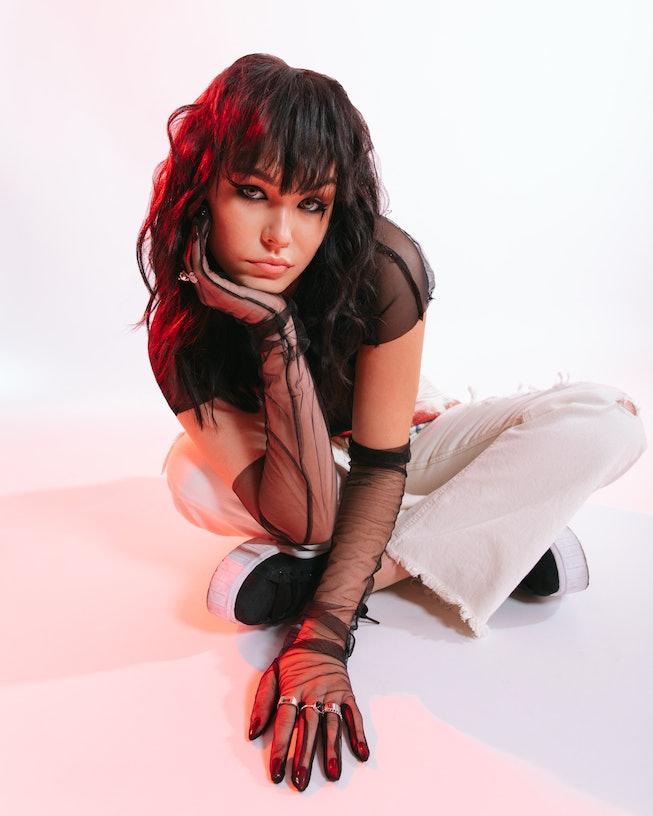 Taylor Upsahl — who performs under the stage name UPSAHL — didn’t know she was making a breakup album at first. The 22-year-old singer began the process in 2020, following a particularly difficult split. “I feel like so many people went through shitty breakups in quarantine,” she says over Zoom, rolling her eyes at the thought of her ex.

“It was the only person I’d ever really been with,” she continues. “We were together for a really long time, so when it ended, I felt like half of my identity was taken out of my body. I was like, shit, who the fuck am I now?” It’s a tricky question that often plagues the brokenhearted. When your partner leaves, where does that leave you?

UPSAHL turned to music to figure it out. It was a fitting reaction for the rising pop-punk singer, who's built a career expressing her feelings through songs. She released her first EP at 14 years old, before signing a formal record deal four years later with Arista Records. The following spring, UPSAHL co-wrote and released the hit song “Drugs,” inspired by a friend’s party-hopping adventures. Soon after, “Drugs” went viral, and now has over 75 million streams on Spotify along with an edgy remix featuring alt-group Two-Feet. From that point on, UPSAHL established herself as a musical force to be reckoned with, releasing more lyrically gritty tracks with her signature can’t-be-bothered flair. Take her latest single, “Lunatic,” for example — which indulges in a breakup revenge fantasy, including an accompanying music video in which the singer becomes a Psycho-inspired killer of her ex.

UPSAHL’s success undoubtedly stems from her ability to channel difficult experiences into irresistibly catchy songs, and her upcoming debut album, Lady Jesus, may be her best work yet. “I did as many sessions as I could, whether it was on Zoom or through quarantine writing camps,” she says of creating the album. “I just wrote throughout the whole process, and I wrote about each of those emotions.”

During our interview, a bright poster hangs on the wall behind UPSAHL, with the phrase, “If I had no bad luck, I’d have no luck at all” written across it. The singer explains the phrase is actually a lyric from a song by her dad's band Sterotyperider. It also seems to capture UPSAHL’s approach to lyric writing — no pain, no gain. Our experiences inform us, even — especially — the negative ones.

Ahead of the October 8th release of Lady Jesus, UPSAHL spoke with NYLON about her writing process, the power of vulnerability, and a surprising love for extreme sports:

Where does the album title, Lady Jesus, come from?

I was in a writing camp at Nashville and I kind of realized one day, “I think I’m okay now, I don’t know why I’m hanging on to this sadness.” I just loved being depressed over this boy for so long until I was like, “I’m good, I like what I’m doing. I feel like I’ve been completely reborn, I’m a new person, and I feel great.” That day we wrote the song “Lady Jesus,” — I wrote it with my friends Johnny and Will — and we were just in this rebirth energy. I was like, “We’re calling the album Lady Jesus.”

How do you draw on personal experience when writing music?

I feel like as a songwriter, I'll take the tiniest feeling, or tiniest drama, and exaggerate the fuck out of it just for the sake of the song. But I think that's part of what we have to do. I write from mostly personal experiences or if my life is going well — like for example right now I just finished my album, I'm chillin’ — I like pulling from the bullshit my friends are going through and writing about that. But for Lady Jesus, it was very autobiographical. I would just roll up into the studio bitching about however I was feeling that day, and then we would write a song about that. So, it very much is a very vulnerable, real, album for me.

That sounds really cathartic — or is it difficult writing about something so personal?

I think it was a mixture. I think some days it was difficult. I feel lucky because I was working with a group of people on this entire album that I really trusted, not only creatively but emotionally, on a friend level. So I felt like I was in a very safe space to just say however I was feeling, even if it was ridiculous. But yeah, there were times when we were crying in the studio and there were times I was screaming and pissed off. Like when we wrote the song “Lunatic,” which just came out. I was in the worst mood ever and decided to just put that into a song. I feel like somedays songwriting can be making you even more depressed about whatever is going on, or it can completely turn your mood around, and it's kind of like a little therapy session. I guess it just depends.

Do you have a favorite song on the album?

Damn, it changes every day, but I think the one that I'm most excited for people to hear right now is “Lady Jesus.” It’s kind of, for me, the turning point for my life and my music. And I think it's leading into whatever's to come next musically, so I'm excited for that for sure.

How do you want Lady Jesus to resonate with listeners?

I think in making this album I got to experiment a lot just sound-wise and concept-wise. I just kind of did whatever I wanted and it was a really fun process, so hopefully, in doing that, there's something for everybody on the album. I think that's the biggest thing for me — I wanted it to be not only just me telling my story, but also accessible for anyone no matter their age, gender, or whatever. I just want them to be able to find a piece of them somewhere in the album.

Did your experience growing up with a pop-punk musician dad influence your sound?

For sure, my dad was in punk bands all throughout my childhood, so I was just obsessed with the punk scene. I thought it was the coolest thing ever. We had a band room instead of a living room growing up. I was always just surrounded by instruments and music was always playing. And my dad taught me guitar when I was five, so he's just always been my biggest inspiration musically. And I think without realizing it, that kind of punk energy, or that rock-alternative vibe, is always going to come out in my music because of him and just how I grew up.

Has being a female artist in the often male-dominated alternative/punk scene ever been difficult for you?

For sure, I think being a woman in music is insane. I feel like — especially being young too, and a songwriter — there's a lot of rooms you'll walk into where there's a dude producer who thinks that you don't know how to write, or play any instruments, or don't know how to sing, or come up with harmonies, and you're just constantly being underestimated. And I feel like as a woman, in any industry, you have to work twice as hard to prove yourself to people. I just kind of started to channel it into motivation for me to just work twice as hard to prove all these motherfuckers wrong. But it's a constant struggle. I feel like the music industry has a lot of growing to do. But we're definitely on the right path for sure.

What makes you feel powerful as an artist?

I think when I feel the most powerful is when I’m being the most vulnerable. I think that's why I do music, is because it's such a vulnerable place to put yourself in. Walking into a room of sometimes strangers and crying because you’re talking about your fucking life, or day, or whatever, and then writing a song about it. That’s such a crazy place to put yourself in, but there’s something so freeing and empowering about being so open about your feelings. That's definitely why I make music.

Aside from the Lady Jesus release, what else do you have going on right now?

It's so embarrassing. I was in a session last night and we were all talking about how we don't have hobbies because music has always been our hobby and now it's our jobs. So I don't know, I mean when I'm not making music, I normally am thinking of music. But I also started this series called “UPSAHL Extreme” where I do crazy, extreme fuckin’ sports on YouTube. I picked up boxing by doing that, and I've been boxing a lot and that's been fun. Also surfing and skydiving. I'm just trying to do whatever, but I always keep coming back to constantly wanting to be making music. Which sounds lame, but I guess it just is what it is.