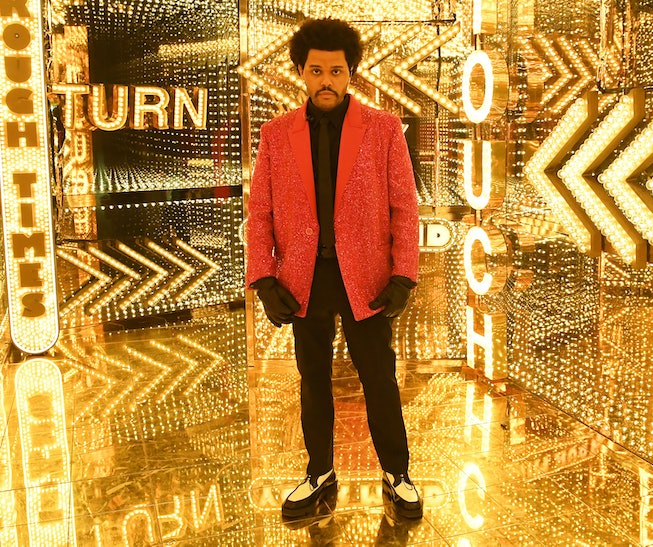 Even if the Super Bowl isn't your thing, America's biggest annual halftime show typically provides some fun fodder, and this year was no different. Abel Tesfaye, aka The Weeknd, performed a medley of his biggest hits during Sunday's game in Tampa, Florida to a live crowd of 25,000 people (plus 30,000 cardboard cutouts to make the stadium appear fuller). It was the viewers at home, though, who quickly turned the Weeknd's performance into an already ubiquitous meme.

Tesfaye's performance drew on all the elements of his most recent After Hours era, from the hardest-working red suit in the business, to the Instagram-face/bandage motif that has had us all scratching our heads for the past year. It was a moment pulled seemingly straight from the Weeknd's 2019 "Heartless" video that proved the most memeable, though, as a dazed Tesfaye stumbled through a set of golden mirrors.

There's about a 24-hour window before this becomes just another oversaturated meme, so enjoy the below while you can.

NEXT UP
Culture
6 Shows To Binge Once You've Finished 'The White Lotus'
A Night Out
A Night Out With Rachel Bilson
Culture
Phoebe Dynevor Will Not Return for Bridgerton Season 3
Culture
Succession Season 4 Trailer Explodes With Family Drama
Style + Culture, delivered straight to your inbox.