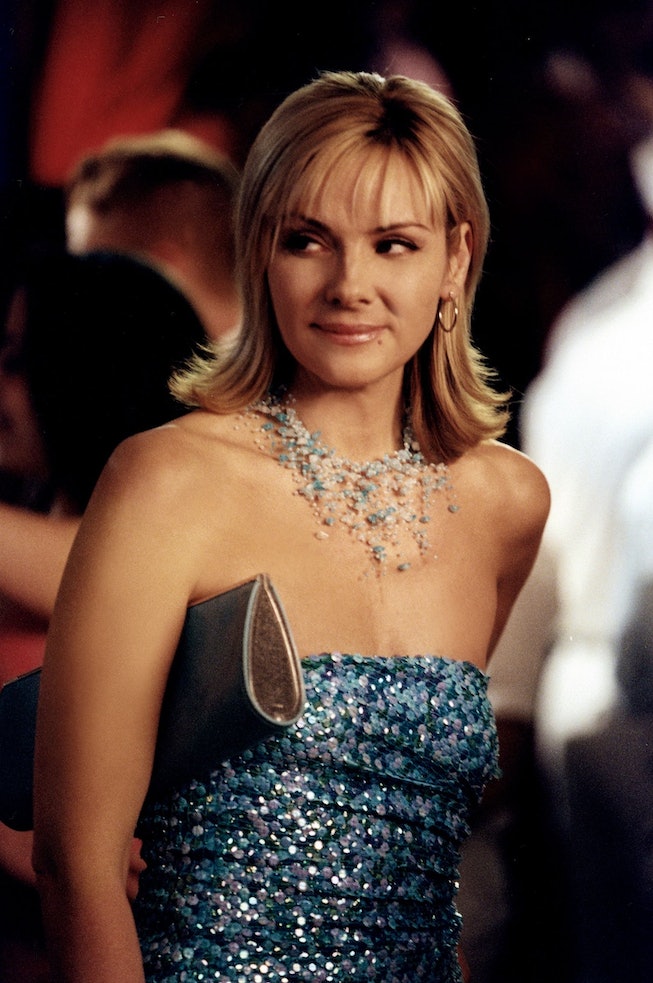 Soon after HBO Max confirmed their decision to reboot the beloved teen drama Gossip Girl, I committed myself to rewatching the once fantastic series about über-privileged high schoolers who spend their free time drinking, doing drugs, and frequenting nightclubs they’re clearly too young to be attending. Coincidentally, around the same time, I struck up a rewatch of Darren Star’s Sex and the City — though not because I was anticipating any continuation to a story that allegedly reached its overdue conclusion with two mediocre studio films and scrapped plans for a third. No, I did so simply because I’m gay and revisiting this popular HBO dramedy about four friends navigating sex, dating, and love in a hyper-unrealistic version of the city I now call my own home has become something of a yearly tradition.

So imagine my surprise when, three weeks ago, rumors began swirling that HBO Max was in talks to revive the cherished series. Multi-Emmy and Golden Globe winner Sarah Jessica Parker would return as central character Carrie Bradshaw, of course, but so, too, would one-time aspiring politician Cynthia Nixon as top lawyer Miranda Hobbes, as well as Kristin Davis as the prim and proper Charlotte York.

The only name that was missing? Kim Cattrall, whose fan-favorite Samantha Jones was suspiciously absent.

For those who’d been following the years-long behind-the-scenes drama of Sex and the City, Cattrall's exclusion wasn’t particularly surprising. After all, it was her refusal to revisit the Patricia Field-styled world that initially put the brakes on the woefully misguided plans for a third silver screen addition in the first place.

As was to be believed, Cattrall and Jessica Parker hated each other. And not just the way two divas normally hate each other — but with a burning passion that made it all but impossible to even be in the same room with one another, let alone on set together for weeks at a time, ignoring reality to act like they were inseparable besties. (I take SJP's recent claims that she "never said" she "disliked [Cattrall]" and that Samantha "will always be part of us, no matter where we are or what we do" with an incredibly tiny, borderline microscopic grain of salt.)

To her credit, Cattrall never tried to derail the franchise herself. She never asserted that the show would be nothing without her nor did she try to force Jessica Parker out of the picture so she could rise as the true star. (Even the most anti-Cattrall accounts of their beef seem to harp on salary disputes as the primary reason for her decision to hang up Samantha's scantily-clad wardrobe.)

In fact, back in 2017, during a highly-publicized appearance on Piers Morgan's Life Stories, Cattrall said that, although she was done, she would love to see Samantha recast. "I played [Samantha] past the finish line and then some," she admitted. "I loved it and another actress should play it. Maybe they could make it an African-American Samantha Jones or a Hispanic Samantha Jones, or bring in another character." Given that one of the chief complaints lodged against the series pertained to its lily-white depiction of one of the most racially-diverse cities in the nation, Cattrall's suggestion seemed like a worthwhile consideration for the series' producers.

Nevertheless, it's been hard to imagine a version of Sex and the City without Samantha Jones, even if diehard fans knew that Cattrall would never return. Yesterday’s official confirmation that the series was, indeed, getting the revival treatment (under the new name And Just Like That...) validated what we were all expecting. But as the internet rejoiced, I couldn’t help but to take a moment of pause to consider what would be lost without the show’s (im)moral center.

Though Carrie Bradshaw is Sex and the City’s de facto protagonist — it’s her voice that narrates every scene — the show’s success has always been reliant on its depiction of a group of women, each who filled a distinct archetype when it came to their thoughts and opinions on dating and sex.

As many have come to realize in the years since its (soft) conclusion, Carrie wasn’t really all that likable of a character — she nagged, was deplorably self-centered, and often annoying. (Don’t even get me started on how she responded to Aidan Shaw's completely selfless offer to remodel her crumbling, rent-stabilized Manhattan apartment by creeping off to dingy hotels to have sex with the same man who refused to commit to her — only to run off to Paris, find a much younger girlfriend, and marry her within a matter of months.)

Thankfully, however, Carrie's un-likability was balanced out by the personalities surrounding her. Miranda was the pragmatic one, a natural extension of her career as a liberal-minded, high-powered lawyer; she kept Carrie in check, but did so in a loving way that always made room for Carrie's tiresome tendency to see the world through painfully myopic, Dior-branded sunglasses. For what it’s worth, Charlotte, with her textbook prudishness and proclivity for judging others, could often be just as grating as Carrie. But taken together, these wildly different personas had a surprising way of gelling. Just like The View, these characters' differences in opinion were the whole point, all the better to help fuel their frequent brunch-time debates.

And these debates would be nothing without Samantha. A no-nonsense PR agent who knew her worth and refused to be defined by her age — "Ladies, what I'm about to tell you may come as a shock," she tells Carrie, Miranda, and Charlotte during a season three bathroom scene. "I'm a little...older...than you" — Samantha loved casual sex and, more importantly, loved to talk about how much she loved it. In her famous column "Difficult Women," former New Yorker TV critic Emily Nussbaum argued that Carrie Bradshaw was TV’s "unacknowledged first female anti-hero." And while her assertion that Carrie's prickliness constituted a huge stride for female agency on television was ironclad, I'd go a step further to argue that Samantha's free-wheeling approach to sex was just as, if not more, important for what we'd later see from our leading ladies.

While it was nice to see a woman be messy — as much contempt as I hold for Carrie’s mistreatment of Aidan, I do understand the narrative necessity of making sure viewers understood that Carrie was imperfect and just as susceptible to self-destructive behavior as any man — it was even nicer to see a woman take full ownership of her sexuality. As the only character audacious enough to gift abnormally large dildos to her gal-pals at a pre-10:00am breakfast, Samantha was certainly the group's most irreverent figure. But for this very reason, she also represented the show's most radical departure, the character who most precisely defied the norms of what a "respectable woman" should look like. Like everyone else, Samantha was also a high-powered career woman — if there’s one thing Sex and the City did well, it was showing that women really could have it all: a good job, a fulfilling sex life, a steady romantic partner (or several) — but she never let that stop her from behaving like, for lack of a better phrase, one of the boys.

Which is to say, without Samantha, Sex and the City would have never become the game-changing series it now is. So how will this upcoming revival reckon with her absence?

The foremost solution would, of course, be to simply replace Kim Cattrall but not the Samantha archetype itself — to take heed of Cattrall’s suggestion and add in a proxy fourth character who was similarly sex-positive, but also had slightly more melanin. But that ignores how much revivals like these rely on the original dynamic. While the upcoming Gossip Girl reboot may succeed precisely because it's starting with a clean slate, placing an entirely new cast into the familiar world of its predecessor, And Just Like That..., by contrast, is still looking to Sex and the City's original characters to capture some of that late 90s/early aughts spark. A “replacement” character would only draw attention toward that which is no longer there.

Besides, Sex and the City needs to atone for much more than a lack of racial diversity in this upcoming revival. During its original run, the HBO series also fumbled its handling of issues pertaining to sexuality, like when Carrie ended a relationship with a nice man by writing his bisexuality off as an age preference. “They could do whatever they wanted, but deep down, I was too old to play this game,” she says, in voiceover, while leaving a party where a group of sexually-fluid 20-somethings played a harmless game of Spin the Bottle, feeling totally secure in her decision to leave non-heterosexuality to the young folks, as if bisexuality was some new craze only embraced by the generation beneath her. Similarly, the show had a tendency to tokenize gay characters like Stanford Blatch as queeny, sex-obsessed, arbiters of sass — and when it comes to its depiction of the trans community, well, let's just say that describing underemployed sex workers as "half-man, half-woman, totally annoying" is categorically wrong on a number of levels.

No way a "new" Samantha could address all those issues, even if she did happen to be a sexually-fluid, Black trans woman. But sprinkling elements of Samantha's token perspective throughout the show's extended narrative could help to restore the balance that will surely be lost in this revival's recalibration of a four-sided square to a three-sided triangle.

In HBO Max’s short description of the upcoming "new chapter," executives say the revival "will follow Carrie, Miranda, and Charlotte as they navigate the journey from the complicated reality of life and friendship in their 30s to the even more complicated reality of life and friendship in their 50s." Without Samantha to play Devil's Advocate, it's highly likely that this trio may actually over-complicate their individual issues. (After all, what real complications could three, middle-to-upper-class white women really be facing in the midst of, looks around, all the other problems plaguing our nation right now?) Forcing these three women to confront their myopia through other Samantha-inspired means — it's not a stretch to say that Samantha's philosophy is the closest match to modern-day feminist politics — might be the only way forward. As Miss Jones once said, "I am harsh, but I’m also demanding, stubborn, self-sufficient, and always right."