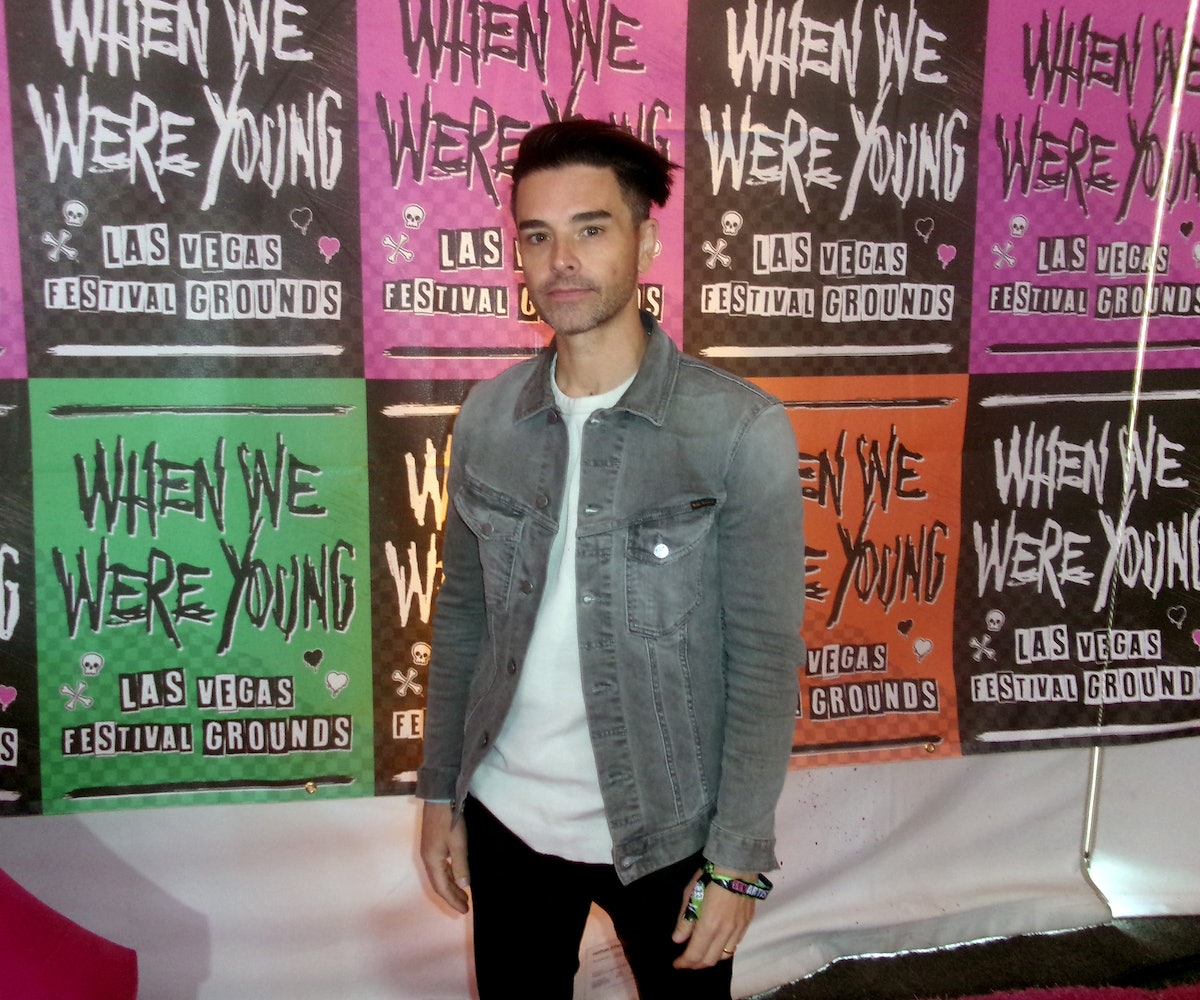 When it comes to the When We Were Young festival, there was no lack of artists to see. In fact, one of the biggest complaints of the festival was that there were too many good sets and too little time. Would you watch Paramore or Thursday? The All American Rejects or Avril Lavigne? The schedule was jam-packed from start to finish, making it one of the busiest days in emo history. Amidst the chaos of it all, several of NYLON’s favorite bands managed to find time to stop by the media lounge for a quick catch-up in-between sets. Read up on what they did with their unexpected day off in Vegas, the bands they were most excited to see, and more, here.

What bands are you most excited to see today?

Jeph Howard: Bands like Taking Back Sunday that we’re friends with. But what’s been really cool is catching up with old crews. When you tour, crews trade out so often that you end knowing all the crew guys.

Bert McCracken: It’s like six degrees of Kevin Bacon, but with crews.

What is a typical Vegas crowd like for you?

McCracken: A Vegas crowd is good. We just played here two nights ago in the Palms, and the show was awesome. Crazy crowd.

How would you describe the crowd so far today?

Howard: Insane. We're looking at that line we're coming in like, "Wow, holy sh*t." So, it's going to be something else.

Meet Me @ the Altar

How do you think your set went?

Edith Victoria: There were some circle pits, which we haven’t seen in a minute.

What did you do on your unexpected day off?

Ada Juarez: I slept. I think it was a little needed just 'cause we're on tour.

How would you describe the crowd?

Juarez: Did you see all the ones to come see us?

Téa Campbell: I wish I could count how many black t-shirts I’ve seen today.

How was your day off in Vegas?

What will you do after the festival tonight?

Mike Mogis: Well, unfortunately we're leaving tonight. We’ve got to get to the next show.

Oberst: Then we'll be back next weekend, obviously, for everything. I don't know what the agenda is. I guess I shouldn't say this, but Vegas is not one of my favorite places on Earth. I don't hate everything... I don't gamble, but I do like to drink and smoke everywhere. They let you do that. There's a boxer from Omaha, Nebraska, named Bud Crawford, so last year, I came and watched him fight in Vegas. It's amazing. I'd never been to a real boxing match.

Nate Walcott: Where was it?

Oberst: I think Mandalay Bay or something like that. There was 10,000 people there. He won. He's undefeated. He's been like the... I don't know much about boxing, but it's like the middleweight or something champion of the world for many years, like a decade. He's incredible. He runs a cool gym in Omaha for kids. He’s a badass. Anyway, that was my the one time I’ve been here on my own volition.

Mogis: I love Vegas. I want to say that. On the record, I'll go on the record.

Walcott: Live at the Sands, Frank Sinatra, was one of the best records ever made, with arrangements by Quincy Jones. It's forever, and it's all because of Vegas.

Oberst: I'm going to try to squeeze in, maybe next week, a visit to the volcano. There's a good volcano.

Walcott: Are you kidding me? There's a volcano in Las Vegas?

What do you think of the festival so far?

Oberst: So far, so good. I mean, obviously yesterday was sad. We were looking forward to playing, but yeah, it's cool. When I saw the bill of how many bands they were trying to put on one day, I was kind of amazed. I was like, this has the potential to be like Fyre Festival or whatever. But yesterday wasn't their fault. It was just windy, and it's working out smoothly today.

Did you adjust your normal setlist to appeal more to this crowd at all?

Oberst: We've been on tour for a while now, like a year, and we've been playing a lot of old songs and new songs, so we have enough old songs that I hope will be the ones people remember, but then we're playing a couple of new ones. We have so many records that we're playing a song off of each record or whatever.

Mogis: Originally, when it was three days, we were going to play three completely different sets. Now, we’ll do two different sets and not repeat a single song.

What song was an absolute must-play for this festival?

Mogis: Probably “Lover I Don’t Have to Love.”

Oberst: They’re going to at least remember that one, probably.

Who are you most excited to see play?

Has Hayley Williams influenced you all as a band?

Bela Salazar: I grew up listening to Paramore, you know? I was in kindergarten listening to freaking Paramore. They're awesome.

What did you end up doing last night?

Mila de la Garza: We made dinner. We usually don't do stuff like that, but it was a really nice hotel [room] with a kitchen.

Eloise Wong: And then we saw Katy Perry. It was awesome.

What did you do with your day off?

Jim Adkins: At first we tried looking for something, anything, we could do. That was the denial phase of grief. And then it just sort of morphed into like, "Okay, well I guess I'm just going to let the day unfold."

Rick Burch: I lost a little bit of money at the sports table. Just supporting the economy, basically.

What sets are you going to try to see today?

Adkins: I mean, we are friends with about a third of the bands here. I'm excited to see AFI, obviously Paramore is going to be awesome, Bright Eyes, Taking Back Sunday.

Burch: We’re probably leaving somebody out.

What are you most excited about for your own set?

Adkins: Well, that's sort of a hard question, actually. I'll be excited once it starts, because once that happens, it's easy.

What are your plans for after the festival tonight?

Burch: Start at the north end of the strip and work our way down.

What did you do yesterday?

I went shopping and I cried.

Have you spent a lot of time in Vegas before?

I’ve only been here two or three times, but I like it. I can’t wait until I turn 21.

How are you feeling today ahead of your first show since your album came out?

I’m feeling good. It’s going to be such a good show. It’s just so crazy, because I’ve been listening to my album a lot recently and then as soon as we started doing rehearsals, it’s become real.

How does it feel to be one of the younger artists at the festival, yet you are headlining a stage?

It’s such an honor. I’m just so blessed that I even am able to play in the same festival as so many of these incredible bands and just my favorite artists. I get a little intimidated, because everyone’s like, “we’ve been doing this for years.” But I’m so excited to see Paramore. “Decode” is my favorite song and they just started playing it live. I’m a huge Paramore fan and I f*cking love Twilight.

What did you do last night ahead of the show?

Chris Carrabba: Nothing print-worthy. Jim Adkins and I got dinner off the Strip somewhere.

Are you a big Vegas guy?

Carrabba: I always say I’m happy to be in Vegas if I had a canceled show, but I’d rather have played the show.

How are you feeling about today?

Carrabba: Today is great. They’ve been running this very smoothly from the jump — I never had a doubt. I feel badly that nature conspired to start it off on the wrong foot. I feel really badly for other people that lost out and paid a lot, lost a lot of money and lost a lot of joy for not being able to be here yesterday.

What are you most excited about for your set?

Carrabba: I want to look out and see that crowd.

It’s going to be huge.

Carrabba: Oh, yeah, it is going to be huge. But it's less so about the number and more about the familiarity I have with them.

All photos by Lauren McCarthy.