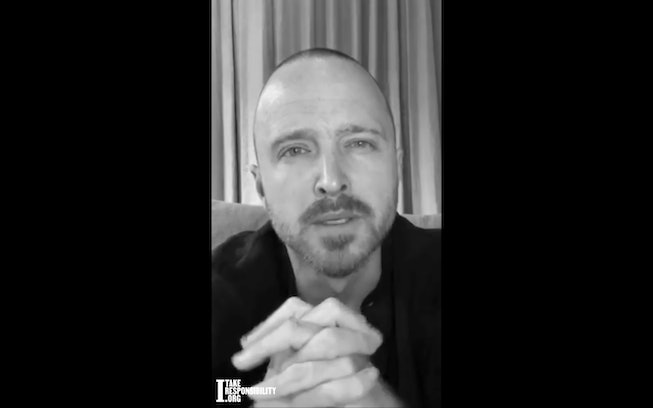 White Hollywood celebrities are uniting once again, this time against racial injustice and police brutality, and "taking responsibility" in a new PSA. The "impact-oriented campaign," created by Confluential Films and titled I Take Responsibility, launched on June 11 and was created to rally the white community, provide education, and encourage action. The initiative is in partnership with the NAACP, and encourages involvement through demanding police accountability, supporting frontline organizations, donating to affected families, and mobilizing voting efforts.

To publicize the campaign, I Take Responsibility released a somber black-and-white video featuring a stream of white celebrities, from Sarah Paulson to Kesha to Aaron Paul, who each apologize and "take responsibility" for past racist behavior. The blunders they cite range from the small micro-aggressions of stereotype jokes to Bryce Dallas Howard regretting "every time I explained away police brutality." More than just the vertical iPhone orientation and editing, the video is a stark recall to Gal Gadot's tone-deaf "Imagine" sing-a-long that plagued the early days of quarantine; it only furthers the argument that maybe not every movement needs to hear from the celebrity class.

While the initiative may be well-intentioned, this only seems like another instance of virtue-signaling and white guilt from Hollywood's elite. Even its action items feel flawed; clicking "demand police accountability," on the site pushes the #8CANTWAIT initiative as its top pick, even though Black activists have condemned the initiative as a misguided and a clear way to actually increase police budgets. Instead, it would've been nice to know how much each celebrity participant donated to frontline organizations like Black Visions Collective or Reclaim The Block.

It's also difficult not to separate the initiatives well intentions from its corporate and marketing backend. In addition to being the brain project of the LA-based production company and its NAACP backing, the initiative also cites two NYC-based PR and marketing agencies as its partners. (Its lengthy 'Thank You' list also lists names like Katie Couric, Jamie Foxx, among all the other celebrities involved in the video.)

“In order for us as a nation to get to a better place, we’re going to have to adjust how we see each other and engage in open and honest conversations that might be painful at times," said NAACP president and CEO Derrick Johnson in a statement released with the PSA. "The fight for civil rights, and human rights have always required a diverse coalition of partners and allies. It is powerful when white people can speak openly about the individual and structural racism and privilege that deny others their full rights. We need everyone to join us on the frontline in the fight for justice and equality.”