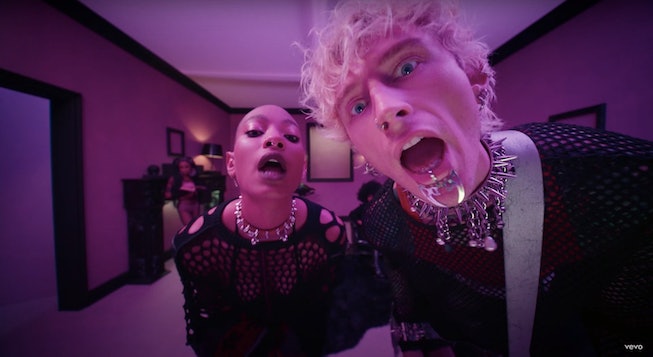 In 2022, the hottest thing you could be is an emo girl. That may be a bold claim, but it’s a fact for Machine Gun Kelly, who released his explosive new single with Willow as a tribute to the fish-netted, eye-lined, hair-dyed gals of pop-punk. Now, they’re spreading that sermon far and wide with the playful new music video for “Emo Girl,” which sees the duo with magical powers, transforming everyone — including a gaggle of school children — into hot emo versions of themselves.

The duo’s new video debuted online on Wednesday, and includes a cameo from the pop-punk patriarch himself, Travis Barker, who appears hilariously in costume as a square, wig-wearing school teacher at the beginning of the clip. Ushering a group of kids into a museum for a field trip, Barker and the kids soon get a lesson on exquisite emo styling and aesthetics courtesy of Kelly and Willow. Our two stars are hanging out with friends in some nondescript house, all dripped out in the classic pop-punk accessories: tongue rings, thick eyeliner, bleached out hair, spiky chokers, and studs everywhere.

In the same way Kelly, Willow, and Barker have been introducing a new generation to the era of pop-punk, they do the same to the group of school kids, who, after watching Kelly and Willow, magically transform into punked-out versions of themselves, complete with side buzzcuts and random blonde hair streaks (cue the flashbacks to early-aughts raccoon hair).

Directed by Drew Kirsh, the video is part of Machine Gun Kelly’s rollout for his highly anticipated next album, Mainstream Sellout, arriving on March 25 via Interscope Records. He’s released one other song from the project, lead single, “Papercuts,” which hues on the darker end of pop-punk, dwelling on themes of being an outcast, and dealing with fame and feelings of self-destruction.

See everything we know so far about Kelly’s Mainstream Sellout, and watch “Emo Girl” above.