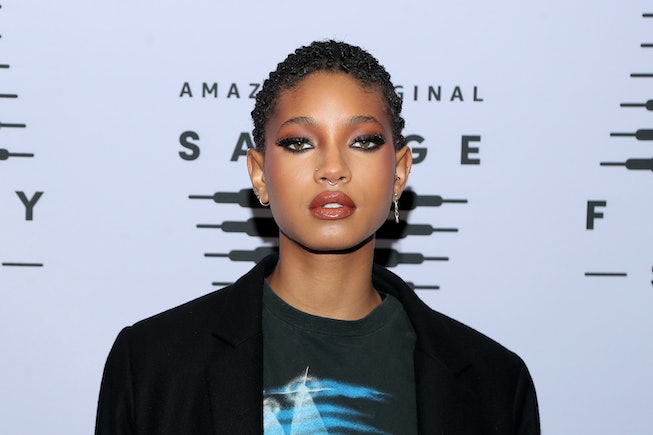 There’s no doubt about it: With the return of trucker hats and, dare we say it, low-rise jeans, the early-aughts are definitely back. That also applies to music, and over the past year, the thunderous sounds of pop-punk have made a comeback with the help of one man: Travis Barker. He’s played mentor to a cast of Gen Z newcomers eager to bring back the heyday of smudged eyeliner, swooped hair, excessive chains, and hardware — including one Willow Smith. Back in April, the two debuted the first single from Smith’s new punked-up era, “Transparent Soul.”

Barker and Smith, who is going by just Willow, have now brought the powerful anthem to the late-night circuit, delivering their first live performance of the track on Fallon. If you ask us, it’s likely to convince any last remaining skeptics reluctant to embrace the genre’s return.

Dressed in a David Koma black mini-dress paired a huge studded belt and artfully smudged electric pink eye shadow, Willow shredded her way through the song with her guitar, as Barker accompanied her on the drums.

Though “Transparent Soul” is far from the pop-rap sound of “Whip My Hair” from her 2010 debut, the now 20-year-old’s sonic pivot isn’t that much of a surprise considering her mom’s former stint as front woman of the nu-metal group Wicked Wisdom. And as if to prove that point even further, Willow covered one of Wicked Wisdom’s old songs “Bleed All Over Me” on Red Table Talk for Mother’s Day, as Jada Pinkett-Smith beamed with pride from the sidelines. Us too, Jada, us too.

Willow’s “Transparent Soul” is off a forthcoming untitled album expected to drop this summer. During her appearance on Fallon, Willow dished on the project, and revealed the fascinating tidbit that she was inspired to finally learn how to play the guitar after listening to Michael Cera’s music. “Him being such a unique person to even make music, I was like, ‘Whoa, this is inspiring in a really unique and weird way,’” she said.

She also added that “we’re going to see a lot of collaborations on this album.” Which means we’re demanding a Willow and Pete Wentz collab, stat!