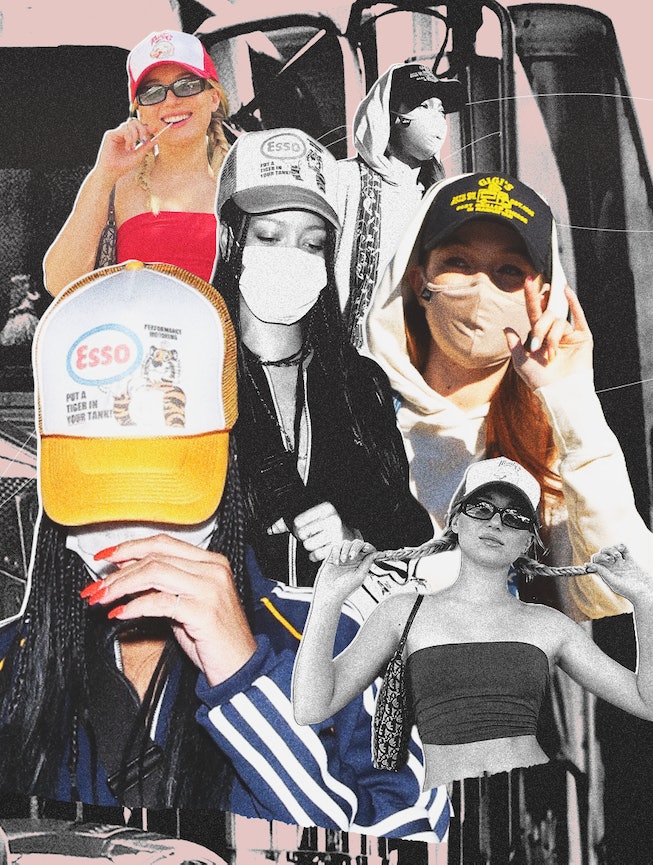 Cast your mind back to the early 2000s. Lindsay Lohan is wearing a “Drama Queen” trucker hat ahead of the MTV VMAs, and paparazzi shots of Britney Spears show the pop star out and about in a Von Dutch cap. Although Paris Hilton recently said she wouldn’t engage in the return of the early-aughts fashion trend — despite wearing one often on The Simple Life — the trucker hat is back, in a big way.

With Bella Hadid recently securing Von Dutch’s return to relevance, and Miley Cyrus, Rihanna, and Gigi Hadid all stepping out in the vintage-inspired accessory, it was only a matter of time before the infamous style began trending again. These days, however, nostalgic thrifted brands are met with modern versions from new designers like Mowalola, whose popular trucker hat often drops (and sells out) in different colorways.

Evi Berberi, communications lead at global fashion shopping platform Lyst, says that when looking at the past month, online searches for trucker hats have increased by 28% year-over-year, with the most-wanted brands in recent weeks including Adidas, Y-3, and Calvin Klein. Black, orange, and yellow details are among the most popular colors.

There’s no denying that Gen Z is inspired by nostalgia and Y2K fashion, with the hashtag #Y2K on TikTok generating nearly 2 billion views and the imminent return of the notorious low-rise jeans. But what is it about this moment in fashion that has made way for the trucker hat, an ugly fashion trend that many argue should be left in the past?

Erza Nicaj, senior strategist of culture at Fashion Snoops, says the pandemic could be a factor. “The global pause of 2020 has left many yearning for pre-pandemic times, even if it dates back a whole decade,” she tells NYLON. “We are seeing low-rise jeans, baby tees, baguette bags, and exposed thongs — but no 2000s trend renaissance would be complete without a coveted fashion item: trucker hats.”

Nicaj says that the origin of a trucker hat has rural and blue-collar associations — “one that transcends trend.” “The hats were inexpensive, comfortable, and made for a hard-working class that was too busy to worry over their image,” she adds. “In a similar sense of irony, trucker hats as a fashion statement give off that same carefree energy.” Nicaj notes that fashion in general has turned to more casual trends in the past year. Pairing the urge for comfort with the rise in 2000s fashion — as well as Von Dutch’s new Paris-based creative director, Earl Pickens, who has visions to revive the brand into a luxury direction — the scene has been set for a full-on comeback.

For Isabella Lalonde, the New York-based jewelry mogul behind Beepy Bella, trucker hats are personal. “Growing up, I often saw my Italian grandfather sporting trucker hats when he was gardening, planting seeds, and growing produce,” she tells NYLON. A longtime fan of the trend, Lalonde was excited to modernize it through her own brand, and she recently released three trucker cap styles, one of which was worn by Dua Lipa.

“I designed the truckers I never had the courage to wear growing up. Initially, I never thought trucker hats could be flattering on me, which is why I was so excited to break this misconception in my designs,” she says. “It’s an undeniable form of self-expression when worn, which is why I immediately felt the need to create my own.” Lalonde says she designed her hats with the goal of making trucker caps inviting, approachable, and flattering but without sacrificing the wearer’s personality and the hat’s ability to give any outfit “an unexpected flair.”

While styling a trucker cap can often be considered tricky, its reemergence has sparked an array of ideas on #TruckerHat TikTok, which currently has more than 4 million views. There, traditional masculine-style trucker caps (and videos from actual truckers) live beside the more style-minded, bejeweled trucker caps worn with a bikini and low-rise jeans. This side of TikTok brings together country creators with fashion-forward videos and fit pics, reflecting the universality of the hat.

Lexie Jiaras, co-founder of vegan fast-food chain Monty’s Good Burger, says trucker hats have always been a “cool-girl staple.” She’s eager for their widespread return, too, as the company’s own trucker caps have been a part of its merch collection since launch in 2018. “When we first started, it was the classic Monty’s sweatsuit and trucker,” she tells NYLON. “Nic Adler, one of our partners, and myself wear them on a super regular basis. It was very organic for us to incorporate them into our stores.”

Whether you love them or hate them, trucker hat are sticking around. Are they objectively “ugly”? Perhaps. Does it matter? Not at all. The beauty of this nostalgic trend’s return is how it brings people together and symbolizes a moment in fashion where comfort reigns supreme and looking “tacky” isn’t a concern. With “shot girl summer” on its way, there’s arguably no greater time for the trucker hat’s comeback. Until then, there’s still time to convince queen of Y2K fashion Paris Hilton to add it to her own personal wardrobe again, too.