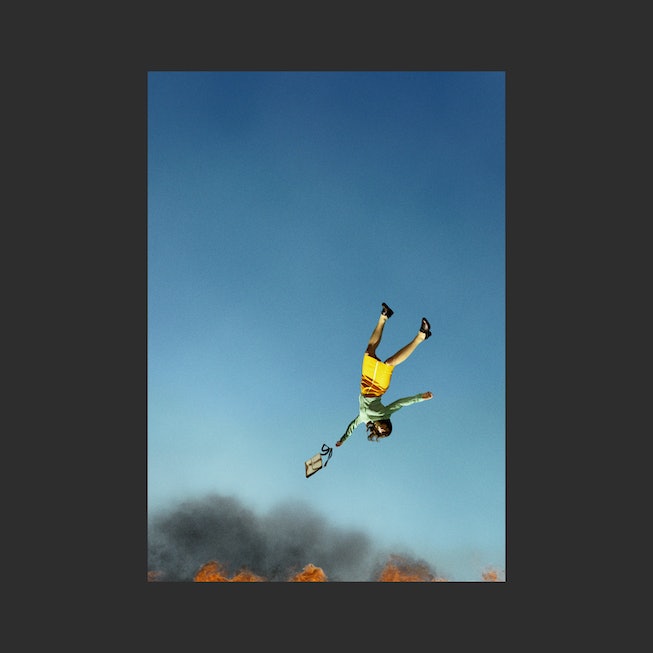 “Austere” was never a word people used to describe the Yeah Yeah Yeahs. For most of their career the trio of drummer Brian Chase, guitarist Nick Zinner, and especially singer Karen O epitomized chaos, a particular kind of unhinged energy that very rarely survives the transition from midnight dive bar gigs to festival headlining sets.

But that spirit traveled and endured with them over a decade and four albums. And two decades after their guttural emergence from New York City’s post-9/11 rock scene, the Yeah Yeah Yeahs have managed a hat trick with their fifth album Cool It Down, out September 30 on Secretly Canadian. The project is a resounding comeback that improves upon their already substantial legacy, a thoughtful reflection on our contemporary state of affairs, and a tender love letter to the generations — of musicians including Japanese Breakfast’s Michelle Zauner and of the band members’ own children — who look up to them for answers to our most burning questions about living, loving, and surviving in the world. All wrapped up in eight songs (or rather, seven songs and an epitaph), the record is austere in the way a photograph of the night sky is: deceptively simple, intrinsically grave, and necessarily wondrous.

Though the last true Yeah Yeah Yeahs album was 2013’s fever dream Mosquito, its three central members have been busy as musicians with solo side projects, and also as people in the world. (The distinction between “musician” and “person” matters because of how the music industry’s changed under the dueling yokes of Spotify and TikTok, forces that the Yeah Yeah Yeahs never contended with even within the major label constraints and expectations they were under through their contract with Interscope Records.) Post-Mosquito, they’ve spent much of the past ten years secure in a legacy made possible in part by “Maps,” the 2003 sleeper hit that’s now a canonical entry in the best love songs of all time, and a broad discography whose contents nimbly track an aesthetic and emotional evolution from spit and grit to sparkle and gloss.

So why Cool It Down now? In an interview with The New Yorker, O alludes to a sort of seven-year-itch (in her case, she draws a line at six) wherein the “cravings” for certain “kinds of highs” return. Not the highs of pretty-young-thing entropy, back when she was one of the only women in a cadre of 20-something men, and back when she drank herself into oblivion in order to “break through shyness.” But the kind of high that a performer chases when she no longer has a regular space or directive to perform, both from the pandemic’s crush of live music and the acknowledgement that the Yeah Yeah Yeahs is not just a family in spirit but also in fact now, as both she and Chase have children.

O’s shared in interviews that one of the driving forces behind the album is our heating world (hence the title). Early single and album opener “Spitting Off the Edge of the World” begins with a declarative “Cowards!,” the band’s provocation toward themselves and everyone who should’ve known better than to let Earth spin out into irreversible climate change. O openly laments, “Mama, what have you done?/ I trace your steps/ In the darkness of one/ Am I what's left?” This abandoned world is what the band invokes again on “Burning”: “Into the sea, out of fire/ All that burning.”

The band is as interested in the ashes of apocalypse as its flames. On “Lovebomb,” O’s voice floats like a buoy, “I, I, I, I, I, I, I,” over a sea of synths before she switches to a siren’s plea: “Come close/ Come close/ Closer now/ Closer now.” The vocal production stutters glitch-like to match the song’s uneasy serenity captured in O’s acidic echoing lines, “Stars/ Don’t fail me now.” Both “Lovebomb” and “Blacktop” function the way the standout track “Hysteric” did on third album It’s Blitz!, serving as reflective cigarette breaks from the swagger and bluster of more classically strutting Yeah Yeah Yeahs songs — in this album’s case, “Wolf” and “Fleez” and “Burning.” Those tracks are reminders that the band can still bring the heat, but also of how far they (and you) have matured beyond their spitfire starts. (At times, the production across the album reminded me of Metric, another band whose arc traces a journey from rock to synth-pop bombast.)

The band is as interested in the ashes of apocalypse as its flames.

Album closer “Mars” is a poem inspired by O’s son. Over blinking blips of production she recites, “I watched my favorite show tonight,” a reference to watching the sky transition from sunset to night. After making an observation of something “Heavenly fire contained/ In a complete circle” in the sky, her son identifies the object as the planet Mars. It’s probably no uncanny and poetic coincidence that Mars is also the name of a dive bar from the band’s early days — and an apt mascot of sorts for the band. Throughout most of Yeah Yeah Yeahs’s career they've imitated the immolation of the planet. But now our world is in flames. So for the first time, decades after their phoenix-like rise, the Yeah Yeah Yeahs have surveyed their settled ashes, coaxed their most enduring embers, and controlled their baby bonfire’s burn.

Yeah Yeah Yeahs’ ‘Cool It Down’ is out Sept. 30 via Secretly Canadian.