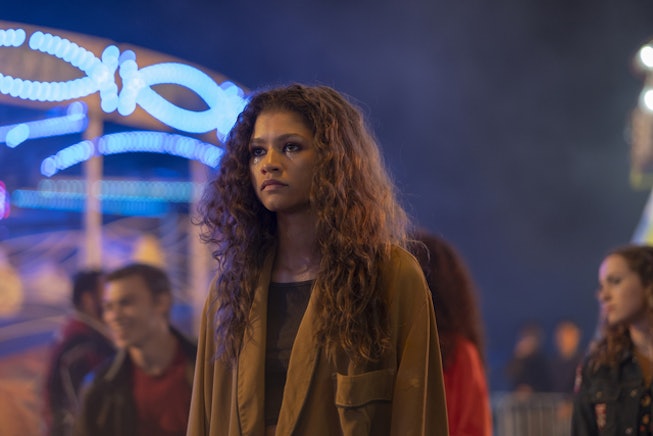 On HBO’s gritty drama Euphoria, Zendaya leads the cast of glitter-wearing teens with her Emmy-winning portrayal of Rue, a recovering drug addict battling her inner demons as she also tries to make it through high school. As the students of East Highland High School deal with their own struggles, Rue’s narrative as an addict living through the cycle of relapse and recovery anchors it all, even in her chaos.

Talking to her Euphoria co-star Colman Domingo for Interview, Zendaya shared that before playing Rue, she “didn’t understand in grave detail the experience of what it means to be an addict.” Colman, who plays Rue’s sponsor, Ali, asked the actor what she thinks of young people who copy the show’s aesthetic without much interrogation.

“It’s not a show to emulate,” Zendaya responded. “The show’s intention, for all of us who make it, is to open up the door to empathy for another person’s experience. Rue has helped me do that, tremendously. Before meeting Sam [Levinson, Euphoria creator], before playing Rue, I didn’t understand in grave detail the experience of what it means to be an addict. Nor did I feel I had enough—maybe some, but not enough—empathy for that experience and how it is, like your character Ali says, a degenerative disease. My hope is that the show makes somebody who has either gone through addiction, or knows somebody who has, feel they are less alone in their experiences, and that maybe it gives somebody the lexicon to communicate with their loved one who needs help, or it gives the ability for that loved one to say, ‘Listen, this is how I feel. I couldn’t explain it to you, but just watch this and you’ll understand where I’m coming from.’ Because the cool thing about Rue is, she makes bad decisions and she hurts a lot of people, but we still love her and we still root for her, and that’s a feeling that I hope people will take on with their own loved ones or other people suffering from addiction.”

The 25-year-old also discussed different kinds of projects she’d like to helm in the future — not as an actor, but as a director. Zendaya, or Z, as Colman calls her, said that while she doesn’t “necessarily have a plan” for a directing career, she knows one story she’d love to make happen: “a simple love story about two Black girls.”

“I don’t want it to be rooted in anything other than just a story about two people falling in love and that’s it,” she said. “Something simple and beautiful, that leaves you happy and wanting to fall in love yourself. I haven’t seen that without it dealing more with the traumatic side of things — which is really important to talk about, but I would love a coming-of-age story where awkward and funny things happen, just like when any other young person is trying to figure out who they are.”

Zendaya added that while she does have dreams for the future, her career and creative ambitions aren’t confined to a specific timeline. “I’ve never really thought, ‘I have to do this by this time and I want to do this by that time,” she said. “I just want to do the things that make me happy and bring me joy and fulfill me as an artist, as a person. So, I keep that loose, because if one day it turns into a completely different career path, then I would allow myself to do that. The idea of trying to direct in the future excites me. That’s why I’m on set so much. When I’m not in it, I’m right there trying to learn. I go around and I ask our crew members, ‘What are you doing today? Can you explain it to me?’ Because we’ve got some real vets in the game. So, the hope is that I’ll be able to, one day, make the things that I want to see.”

Euphoria returns to HBO Max for its long-awaited season two on January 9, 2022.