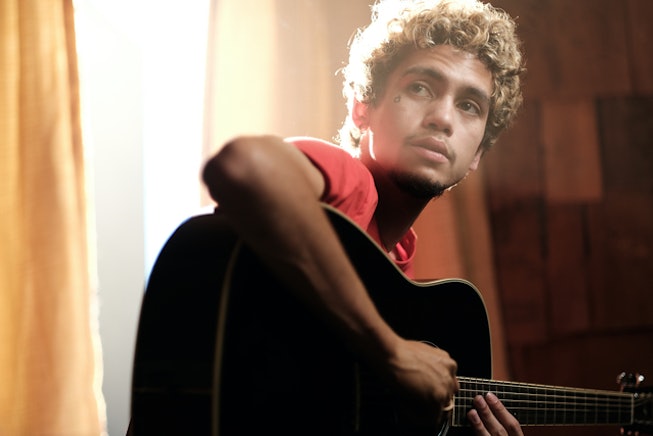 Spoilers for Euphoria’s season 2 finale ahead:

Season 2 of HBO’s Euphoria ended with a bang. I suppose that’s not much of a surprise given the show’s history of jaw-dropping scenes, but it was still a shocker nonetheless. From Lexie’s well-intended yet chaotic production of Our Life, to Nate’s intense confrontation with his father, Rue’s overdue apology tour, and Ashtray’s tragic demise – the episode was a nail-biter from start to finish. And in the midst of the madness, when all we could hope for was a moment of peace, we were presented with a four-minute long serenade from Elliot (Dominic Fike) to Rue instead.

In an after-show interview, Fike revealed that Elliot’s song — which was co-written by Zendaya and Labrinth, the series’ composer — came as a surprise to him as well. “Sam [Euphoria’s writer and director] just came up to me and was like, ‘Yo, I was thinking you play the guitar in this and like, you sing a song. It’s to Rue, but not really about Rue, but it, like, is about Rue, but it’s like a surreal moment, but it’s not,” he recalled. “And I’m like, ‘You just made this decision?’”

For the uninitiated, Elliot is your classic sad-boy with a guitar — stringy, unwashed, hair and all. His character joined the cast as a transfer student in season 2 and dutifully fulfilled his role as a dreamy-eyed menace all season long. After sleeping with Jules, enabling Rue’s substance addiction — and then, thankfully, alerting her mother when things got out of hand — Elliot and Rue’s friendship imploded. Though it seemed like they were done for good, the two reconnected in the finale.

In the surprisingly sweet exchange, Rue thanks Elliot for “accidentally” saving her life. But before going their separate ways, he asks the one question that no girl wants to hear: “Can I play you something?”

Necessary or not, Elliot interrupting a perfectly fine moment with an unwarranted performance might be the most relatable scene in Euphoria’s history. And though many viewers complained that his singing took time away from the rest of the episode, we have to admit, he sounded pretty good. Fike is, after-all, a talented musician in real life.

In a recent interview on The Tonight Show With Jimmy Fallon, Fike revealed that Elliot will be returning to Euphoriaville for Season 3. If the past eight episodes are any indication of what’s to come, his presence will likely bring more turmoil and possibly another far too long song. Let the countdown begin.